Edited by Lukas Engelmann, John Henderson and Christos Lynteris, Plague and the City (Routledge, November 2018) uncovers discourses of plague and anti-plague measures in the city during the medieval, early modern and modern periods, and explores the connection between plague and urban environments including attempts by professional bodies to prevent or limit the outbreak of epidemic disease. We asked the three editors to tell us more. 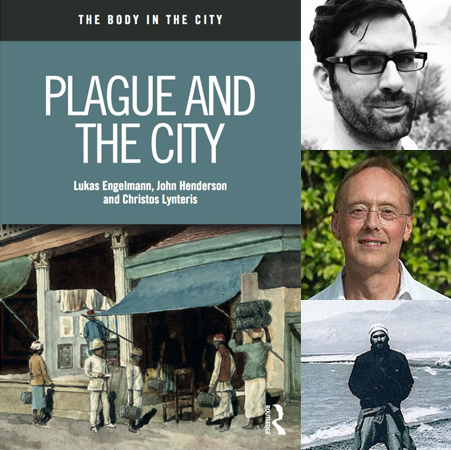 Q. How did this edited collection come about?

Plague and the City resulted from the first annual conference of the project Visual Representations of the Third Plague Pandemic (ERC grant agreement no 336564, PI Christos Lynteris) which took place at CRASSH in December 2014. As part of the Visual Plague project we looked at the ways in which during the third pandemic of the disease (1894-1959), plague was depicted photographically as an urban phenomenon. Of course, plague in itself is principally found in non-urban ecosystems, as it is sustained amongst wild rodents like marmots and gerbils. However, in spite of the discovery of this key sylvatic aspect of the disease (first observed in 1894 in South Siberia), since its first description by Procopius in the time of Emperor Justinian, plague has consistently been depicted and imaged as an urban phenomenon. This has led to both an imagination of the disease and to methods aimed at containing, preventing or eradicating it that are inexorably linked with understandings and problematisations of urban space as a pathological and pathogenic environment. Indeed from the time of the Black Death and before there was a constant concern that smelly, insanitary conditions were the cause of disease which led to the frequent enforcement of regulations across Europe to clean up the environment. Bringing together plague scholars studying different eras of plague discourse, science and intervention (from the Middle Ages to the twentieth century) and in different parts of the globe, the volume provides for the first time a diachronic and global portrait of perceptions of and reaction to plague as an urban problem and their impact on social life. And as the volume is the result of a project aimed at understanding epidemic visualisation, many of the chapters tackle the ways in which plague has been rendered visible as an urban phenomenon, thus underlining the synergies between epistemic, aesthetic and biopolitical framings of the disease.

Q. Around which themes did you decide to structure the book?

Urban space has long been associated with filth and disease. Population density, squalor, immoral behaviour and civil unrest were often brought forward to explain specific outbreaks and to fortify the convergence between the city and epidemic disease in general. In this volume we have sought to unpack different themes of this relationship to find out how stable these themes have been over time. While the chapters cover a period reaching from the middle ages to the twentieth century they speak to three different themes. First, we are interested to find out how urban pathologies were imagined through the lens of plague so as to understand how exactly the city were associated with the disease. The contributions connect the medieval and early modern focus on dirt and stench to the spatial pathologies of the late nineteenth century with its principal focus on the ‘ailing city’, working class living conditions, and ethnic separation. Second, we emphasised the social life of plague to compare the ways in which urban populations reacted to and acted upon the plague. The chapters consider the emergence of principles of sanitation and isolation as well as different ways in which stigmatisation and marginalisation structured the experience of plague in urban spaces across time. Third, all chapters focus on urban interventions, as we were keen to ascertain to what extent plague had a lasting impact on urban infrastructures. Systematic inspection, the establishment of health boards as well as substantial transformations of materials and structures of housing are just some of the pertinent measures adopted by authorities with the aim to disentangle urban space from the ever-lasting threat of plague.

Q. In your view, wherein lies Plague and the City‘s main contribution to the field?

The volume presents a unique opportunity for historian of medicine and public health to compare and contrast the relationship between plague and the urban space over time. Furthermore, it adds a considerable volume of research on the third plague pandemic with its unique global geography and thus integrates the medieval motif of an urban disease to the scholarship on plague in the nineteenth and early twentieth century. It also provides an important yet neglected visual angle in the examination of the history of plague as an urban phenomenon, especially as regards the third pandemic. From a medical anthropological perspective, the volume’s contribution is that it shows how the urban environment has been invested with epidemic properties (or even agency) over the ages, and how the latter have persisted and yet transformed across diverse political and epistemological frameworks of infection and contagion.

Q. What is the volume’s contribution to understanding the relation between infectious diseases and the urban environment today?

The volume is a collection of historical and anthropological works, so its aim is not the study of the urban ecology of plague. The contribution of the book to contemporary understandings of the relation between infectious diseases and the urban environment is hence a critical one. Plague and the City underlines how the urban focus of plague studies and anti-plague interventions over the ages led to a framing of this disease in ways that underlined the contribution of urban structures and ways of life in the spread of the disease. Yet rather than simply being an error is epidemiological judgment, this has shaped the image of the plague to such an extent and at such depth in Western cultures that the scientific correction of this error has had very little impact on the way in which the disease operates symbolically and affectively. It is important to recognise and think with the resilience of the urban image of plague so that we can understand how it continues to impact our perception of urban environments as sources of infection.

The book is distributed by Routledge in paperback, e-book and hardback formats. If your University Library does not already offer e-copies of the book, you can purchase copies of the book online.

John Henderson is Professor of Italian Renaissance History in the Department of History, Classics and Archaeology, Birkbeck, University of London; Fellow of Wolfson College, University of Cambridge; and Research Professor, Monash University, Melbourne. His previous publications include The Renaissance Hospital (2006).

Christos Lynteris is Senior Lecturer in Social Anthropology at the University of St Andrews and Principal Investigator of the European Research Council funded research project Visual Representations of the Third Plague Pandemic (2013–2018). His work focuses on the anthropological and historical examination of infectious disease epidemics. His previous books include The Spirit of Selflessness in Maoist China (2012), Ethnographic Plague (2016) and Histories of Post-Modern Contagion (edited with Nicholas Evans, 2018).

It is important to recognise and think with the resilience of the urban image of plague so that we can understand how it continues to impact our perception of urban environments as sources of infection.