Dr Christos Lynteris is the Principal Investigator of the ERC-funded 5-year project Visual Representations of the Third Plague Pandemic and a Senior Lecturer in Social Anthropology at the University of St Andrews. We asked the medical anthropologist about his recent monograph, Ethnographic Plague: Configuring Disease on the Chinese-Russian Frontier. 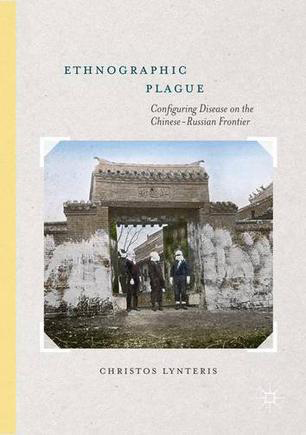 Q. Christos, you describe yourself as a medical anthropologist. Which aspect of the discipline do you find particularly interesting, and why did you decide to specialise in infectious disease epidemics?

My interest in infectious disease epidemics arises and is constantly renewed not just by recurring epidemics across the globe, but by the way in which epidemics, both past and present, challenge and transform human societies. This is a very challenging subject. On the one hand, it requires us to break down the barriers between disciplines, so that we can grasp infectious diseases as biological as well as social and historical forces. On the other hand, it requires us to guard against unequal partnerships, as these often arise in interdisciplinary exchanges. The study of epidemics thus offers itself as a ground where the social sciences and the humanities can move away both from a role of data-providers in cases of emergencies (think the recent Ebola epidemic) and from the role of ‘deconstructors’ of science – with the aim being to build meaningful interdisciplinary collaborations which do not separate the practical from the meaningful, or the applied from the critical. Only then can we begin to understand how epidemics transform our societies and in turn how we contribute to the emergence and persistence of diseases in their specific ecologies.

Q. Your recent monograph, Ethnographic Plague, focuses on the configuration of disease on the Chinese-Russian frontier. Could you tell us a bit more about the subject?

The book emerged out of a simple observation: historical and scientific literature since the turn of the nineteenth century claiming that Mongols and Buryats living on the Chinese-Russian NE frontier did not suffer from plague outbreaks, in spite of plague being endemic in an animal they have used for fur, fat and meat – the Siberian marmot. This idea first arose amongst Russian scientists in the 1890s and persists until today. My initial interest was to excavate this epidemiological theory and see how it emerged and if there is evidence to support the premise of this native knowledge hypothesis of plague prevention. I soon discovered that this formed part of much larger ‘ethnographic’ configurations of plague in the region. So rather than the book being focused on establishing or debunking the native knowledge hypothesis its aim has been to show, on the one hand, how it was formed, what political and epistemological processes made it possible, and, on the other hand, what was its impact on the broader understanding of plague in the region, and efforts to contain it.

Q. Why, in your opinion, is Ethnographic Plague an important study?

More than simply telling the story of plague in a remote if geopolitically important area at the time, the study comes to challenge notions that bacteriology became the prime method through which infectious diseases were studied and understood in the early 20th century. Ethnographic Plague thus follows other recent research in maintaining that the fixing of a disease’s identity through bacteriology did not lead to its epistemological stabilization but was followed by decades of scientific debates and disputes over its true nature. However, the book contends, against theses on the ‘laboratory transformation’ of plague, that methods other than bacteriology played a key role in emergent understandings of infectious diseases at the time. In particular, ethnography, in the broad sense of the ethnological study of society and culture, was extensively employed in deciphering plague at the time. In Manchuria and South Siberia it became so central that at one point, as my book demonstrates, it came to invalidate biological evidence. The book thus comes to challenge accepted epistemological hierarchies in the history of medicine. And, at the same time, it offers anthropologists a new perspective of the scope and significance of ethnography well beyond what is generally considered to have been its impact at the time. As for epidemiologists, the book stresses the importance of approaching ethnographic data and the methods through which these are acquired or transmitted critically. Whether such data are collected explicitly for epidemiological purposes, or put to this service at a later stage, the way in which ethnographic information is translated into epidemiological evidence is a question of key importance for Global Health.

Q. Where might I find a copy of the book?

The book is distributed by Palgrave Macmillan in hardcover and ebook form at the moment. If your University Library does not already offer e-copies of the book, you can purchase copies of the monograph or any of its chapters online.

With the imperative of moving towards a relational understanding of disease in mind, and with the hindsight of the implications of the employment of ethnography in the understanding of plague in the course of the third pandemic, the historical and anthropological critique of epidemiology can become a key tool for forging a new critical epidemiology.