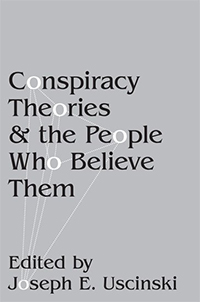 CRASSH is delighted to announce the publication of Conspiracy Theories and the People Who Believe Them (Oxford University Press, 2019). Edited by Joseph E. Uscinski, the book includes contributions by members of Conspiracy and Democracy, a Leverhulme-funded project based at the University of Cambridge from 2013 until 2018.

Conspiracy theories are inevitable in complex human societies. And while they have always been with us, their multiplication and proliferation is unprecedented due to increasing knowledge, a sense of powerlessness, and a distrust of elites, that have merged to generate conspiracy theories on a vast scale in our era. In recent years, scholars have begun to study this genuinely important phenomenon in a concerted way. In Conspiracy Theories and the People Who Believe Them, Joseph E. Uscinski has gathered forty top researchers on the topic to provide the foundational tools and evidence to better understand conspiracy theories not just in the United States, but around the world. Each chapter is informed by three core questions: Why do so many people believe in conspiracy theories? What are their effects? What can or should be done about them? Using systematic analysis, rich discussion, and cutting-edge research, this volume will help us better understand an extremely important, yet relatively neglected, phenomenon.

• Click here for more information and to order a copy of the book. 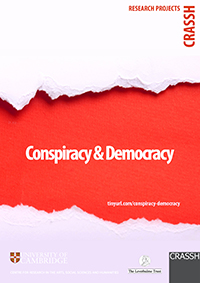 This ambitious, five-year, interdisciplinary research project explored these and related questions. It set out not to debunk particular theories but to provide a ‘natural history’ of conspiracy theorising. To do that, Conspiracy and Democracy combined the perspectives, investigative methods and insights of historians, political theorists, network engineers and other disciplines to produce a deeper and richer understanding of a fascinating and puzzling phenomenon.

Why do so many people believe in conspiracy theories? What are their effects? What can or should be done about them?