The ‘data walkshop’ led by Alison Powell, of the LSE’s Media and Communications Department, and Alex Taylor, of Microsoft Research, on 7 October 2015 was a wonderful way to kick off our year of Ethics of Big Data events.  As Alison explained, she modelled the concept of the walkshop after Laura Forlano’s flash mob ethnography approach.  Our remit was to wander the streets, collaboratively spotting data (our instructions purposefully left ‘data’ and ‘big data’ undefined).  Through exploring environments new to us with an ethnographic eye, the idea was that we would naturally begin to reflect on our understandings of data and how data is constructed and controlled.  We also wanted the process to highlight that underpinning any considerations of the ethics of big data are particular understandings of what data is in the first place.

Our first stop was the Microsoft building on the corner of Tenison Road and Station Road.  Many of us had cycled to the seminar and had our hopes raised and dashed by the half-empty cycle racks right outside, clearly labelled ‘Microsoft employee bicycles only.  Unauthorised bicycles will be removed.’  Scanning the surroundings, there was no clear indication of how this would be enforced, yet knowing the business of the building beside us, many of us confessed to being scared off due to the possibility that a sophisticated, automated, and invisible monitoring bicycle system was in place.  This led to a discussion about the power inherent to the ownership and control of data collection infrastructure and of the data itself – and how the mere suggestion of these is enough to bend the behaviour of those without control to the benefit of those who have it.  As we snooped around and photographed the building, one member framed our actions as surveilling back, or sousveillance.  She did this in a worried tone, as she had recently been questioned by the police for photographing a power plant.

He showed us his phone, which had his own version of the app (the system is the product of a private company), and said that he gets the registration numbers and the parking expiration time, but that he still has to walk the streets to check if cars are still parked past their deadlines.  We asked about how else technology comes into his job, and he told us that he also monitors the bus lane CCTV cameras.  These photograph every vehicle in the bus lane that are not cars, but he has to then screen these for actual violations of the bus lane law; for example, taxis are exempt, and he won’t issue tickets in cases of understandable violations, like when a car moves into the bus lane to allow an ambulance to pass.  This led us to reflect on our assignment to search for the intersection of data and bodies, in that these were clear cases where automated data was only useful once subjected to human judgement. 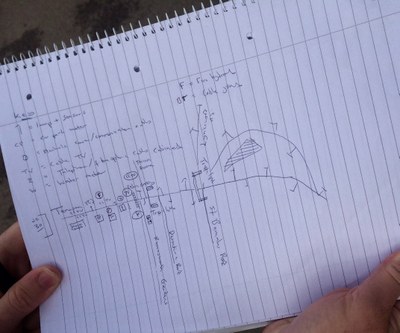 Along the way, our group mapmaker had been plotting the CCTV cameras and the cable cabinets, which are solemnly-painted, waist-high boxes on the sidewalk that house telephone and internet wires.  Suddenly, we spotted a truck belonging to OpenReach, a telecommunications company – did this mean we could peek into an open cabinet undergoing repairs? 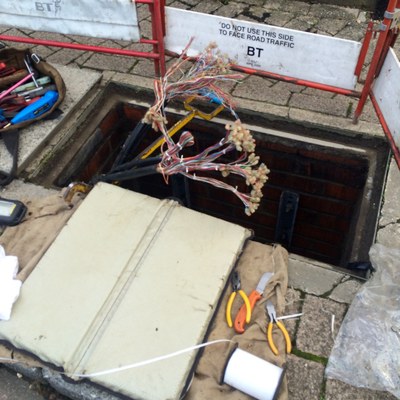 It would be fair to say we ran across the street in excitement and found a manhole cover displaced, revealing spaghetti bunches of colourful wires above a puddle of water lining the cavern.  We greeted the OpenReach employee, who showed us how the connections between the phone and internet cables for the surrounding 100 homes were spliced to wires connected to underground cables.  Each splice was held together with a small, clear plastic cap and a tiny dollop of grease.  Seeing this brought home for us the sheer ubiquity of data infrastructure all around us and the tangible materiality of that infrastructure (plastic caps! grease!) in contrast to the ephemeral, digital spaces to which it connects us. 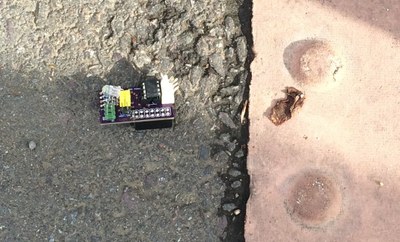 As if on cue, we spotted something glimmering on the sidewalk and approached to see it was a tiny green and purple circuit board, resplendent as a beetle.  It reminded us of the aesthetic appeal of aspects of big data – visualizations as well as infrastructure – that can often be quite beautiful, perhaps disarmingly so. 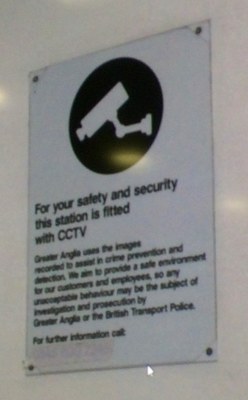 On our return journey, one of our group members pointed to a door number of a house and stated that, previously, that would have been just a door number.  It would have been just one datapoint from which it would take a significant amount of effort to extract other datapoints.  Now, however, you can be walking down the street and put the door number into the pipl app on your iPhone to find out how much the house is worth, what it recently sold for, and even what it looks like inside.  You could Google it to see if you could find out the owners’ names, then could run those through the deep web app pipl.com.  In a matter of minutes, standing on the street corner, you could be able to paint a picture – vivid even if constrained by the parameters of digital footprints – of the people living inside.

Back at Microsoft, warmed up with tea and biscuits, the groups exchanged their findings.  The group that had surveyed the Cambridge Railway Station developed a theme of transparency, power, and data.  They shared images of acts of transparency that they interpreted as a sleight of hand, obscuring the power imbalance between the object and subject of data collection.  These included a window onto a construction site as well as a CCTV sign which, as they said, needs no explanation (although my image is blurry, so you have to look hard for the white tape).

It would be fair to say we ran across the street in excitement and found a manhole cover displaced, revealing spaghetti bunches of colourful wires above a puddle of water lining the cavern.