Christos Lynteris is Professor of Medical Anthropology, at the University of St Andrews, and Visiting Professor at the Laboratoire d’anthropologie sociale at the College de France. The Visual Plague is a monograph resulting from the 5-year ERC project ‘Visual Representations of the Third Plague Pandemic‘ which was based at CRASSH (2013-2017) and subsequently co-hosted by CRASSH (2017-2018), with Christos Lynteris as its Principal Investigator.

Q. Christos, What is your monograph Visual Plague about?

The book is about the emergence of epidemic photography in the context of the third plague pandemic, which was a global pandemic of bubonic plague between 1894 and the mid-1950s that led to over 12 million deaths. The book examines for the first time the photographic coverage of this pandemic and highlights that it brought together two ‘firsts’: The first time that photography was employed to capture an epidemic of an infectious disease. And the first time that the global spread of a pathogen was understood not only by scientists but also by the general public through this all too familiar term to us today: the ‘pandemic’. The book argues that what I call ‘epidemic photography’ differed radically from medical photography, which preceded it by several decades, in that it did not focus on the human body, or the patient, or on symptoms of the disease, but rather on the real or imagined causes of the epidemic and the ways in which to contain and further prevent the spread of the disease. And at the same time, the book examines the role of photography in instituting a completely new experience, the pandemic, as what in anthropological terms we can call a ‘total social fact’, and, at the same time, as a fact with the potential to end all facts: an event of world-catastrophic potential.

When I first came across the vast photographic corpus of the third plague pandemic, back in 2012, and noticed that nobody had paid any attention to it, I was stunned. When I realised that this was the first time an epidemic had been photographed, and that neither historians of photography nor historians of medicine, let alone anthropologists, had taken note of this, I thought something needed to be done. When I then also realised that this was the first chain of epidemics to be visualised and be talked of as a ‘pandemic’, I knew this was not simply a ‘gap’ in historiography but one of the major blind spots in our understanding of the formation of the modern world. Hence with the encouragement of Simon Goldhill, who was then the director of CRASSH, where I was a postdoc at the time, I applied for an ERC grant on ‘The visual representations of the third plague pandemic’, which led to a 5-year long project on the subject. The subject proved to be really vast in terms of the actual number of photographs taken (some 2,100 of the 11,000 collected by the project have been digitised and are available via Apollo) but even more so in terms of the epistemological, aesthetic and political complexity involved in the themes photographed and in what ended up being published where, how and why. What I find particularly interesting about the subject is how plague and its photography had this incredible power not just to connect everything, but to trouble and unsettle the connections between things. We rarely think of grain storage, sewage systems, mooring practices, international trade, burial customs, garbage collection, hospital design or marmot hunting as having much in common, but in a world defined by plague they did, and their inter-connections could be absolutely lethal. And epidemic photography sought to illuminate these links, real or imaginary, and showcase them not only in scientific journals but also in the everyday press and in popular magazines. Plague photographs became part of a global visual economy that for the first time brought images of outbreaks in Cape Town, Porto or Mumbai or Hong Kong or Sydney or Rio de Janeiro to newsstands around the world. For besides being a genuinely complex disease, plague also carried with it a mythic character as a disease with a world-catastrophic potential (see the ‘Black Death’). Hence even the smallest outbreak assumed potentially global importance, something fostered and magnified by the circulation of photographs in media across the globe. This is in effect the notion and experience of ‘the pandemic’ as we know it today in its making – as a scalar process that connects and troubles connections, but also threatens to end all connections. 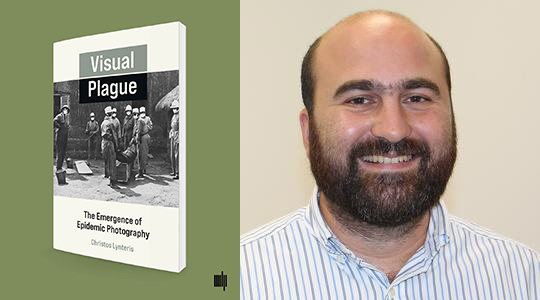 This was one of the most difficult choices. In the end, with the help of my editor at MIT Press, I opted for a long theoretical chapter following up from the Introduction, and then four thematic chapters. In this way, the book does not follow a chronological order, nor are chapters structured regionally, as one might expect. Instead each of the thematic chapters examines a key trope in epidemic photography as this emerged in relation to the study and control of plague: quarantine, disinfection, rat-control and mask wearing. Each chapter draws from several regions. For example the chapter on rat control draws on examples from San Francisco, British India, Hawaii, Java, Japan and Argentina. There are two analytical threads that run through all chapters. The first thread relates to showing how, across its various themes, epidemic photography involved a highly politicised and racialised visual rhetoric. Both the scientific study and the control of plague was centrally undertaken in the colonies, and at the same time formed an important platform for inter-imperial strife. Controlling plague entailed massive and often catastrophic interventions on the lives of colonised and migrant communities, as well as geopolitical tensions, scientific antagonism, and intrusive interventions on travel and trade. So, to put it simply, epidemic photography emerged as colonial photography and in many ways continues being informed by this colonial visual language today, as the ways in which photographs of burials during the Ebola epidemic of 2014-2016 rhyme with those of burials during the third plague pandemic make abundantly clear. The second analytical thread relates to the double ontological operation of epidemic photography, something explained extensively in the theoretical chapter of the book and carried over in each of the thematic chapters in a less theory-heavy manner. On the one hand, epidemic photography aims to show what the epidemic is: what are its transmission pathways, its zoonotic hosts, its vectors, its symptoms, etc., but also its ‘weak points’ through which it can be contained and controlled. This is what I call the assertive ontology of epidemic photography. On the other hand, epidemic photography aims to declaim what the epidemic must be. In the case of plague, that would be a disease with world-historical and world-catastrophic potential, in other words the gothified notion of the ‘Black Death’. In each chapter we can follow the interplay between the assertive or if you like positivistic ontology of epidemic photography and its imperative or mythic ontology, or how photography generates understandings and experiences of an epidemic by entangling epidemiological reasoning with our pandemic imaginary.

Q. In your view, wherein lies the book’s main contribution to our understanding of the emergence of epidemic photography?

I think readers will be surprised to learn that such a modern practice as epidemic photography arose around what most people today consider to be a decisively non-modern disease: plague. In this they are mistaken of course, as plague is one of the par excellence modern diseases, in the sense that, first, its study has been absolutely crucial for the development of epidemiology as a modern bioscience and, second, its control contributed significantly to many cornerstones -some beneficial and many catastrophic- of modernity: from modern urban planning and architecture, to modern shipping and storage practices, to concentration camps and deadly gases used in warfare and genocide. We often think of the ‘Spanish flu’ as the big pandemic of the twentieth century, but the really significant one in terms of its impact on our world is one that very few people remember today: the third plague pandemic. And photography played a key role in this as it fostered a new way of connecting outbreaks across the globe and identifying the causes of epidemics and the ways to control them. Readers would also be surprised to see how much the way we visualise Covid-19 and its control today is similar to these photographs from 100 years ago or more, this is no accident. Plague photography, being the prototype of epidemic photography, has structured the visual language through which we see and understand epidemics and pandemics. To go back to that great thinker of photography, among other things, Walter Benjamin, it has formed what we can call our ‘optical unconscious’ of epidemics and pandemics. And hence, while identifying the tropes of epidemic photography, and their more than often colonial roots, will not automatically dispel their impact on the way we think about or experience epidemics and pandemics, it will hopefully help us wake up not from but, to return to Benjamin, into the dream of our pandemic imaginary.

• Visual Plague is available in print and Open Access from MIT Press.

A fantastic book. Lynteris tells an astonishing story of plague photography and, in doing so, offers clues for thinking through the images and imaginaries that attempt to hold our present pandemic moment.