Sietske Fransen is a Research Associate on the AHRC-funded project Making Visible: the visual and graphic practices of the early Royal Society. Her main interests are early modern history of science and medicine, intellectual history and history of the book, especially in the Low Countries, Germany and England. We asked Sietske five questions about the collected volume Translating Early Modern Science, which she edited with her colleagues Niall Hodson (Durham) and Karl Enenkel (Münster). 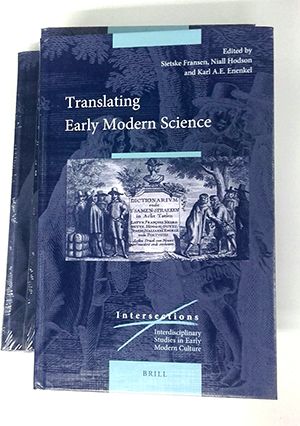 Q. Sietske, what is your position at CRASSH and how long have you been affiliated to the Centre?

Since September 2015 I am affiliated to CRASSH as one of the two Research Associates on the AHRC-funded project Making Visible: the visual and graphic practices of the early Royal Society. And while I wrote my PhD thesis on textual translation of seventeenth-century medical texts, I currently work on a project in which I investigate how early modern scientific practitioners used images and diagrams to translate knowledge between the 2-dimensional space of their books and manuscripts and their spaces of practice (and vice versa).

Q. What is the subject of the book, and how did it come about?

The collected volume Translating Early Modern Science, which I edited with my colleagues Niall Hodson (Durham) and Karl Enenkel (Münster), deals with the role of translations and translators in the circulation and exchange of knowledge and science in early modern Europe. Most of the twelve articles have a specific text or a translator as a starting point, to investigate the forms, reasons, and effects of the process of translating. The volume is the result of a conference, which in itself was inspired by the research for my PhD thesis. The conference “Translation and Circulation of Knowledge in Early Modern Science” took place in 2013 at the Warburg Institute in London. Half the contributors took part in that conference, and the other contributors either spoke in one of our follow-up sessions at the annual meeting of the Renaissance Society of America in 2015, or were asked specifically to contribute. And I think that we have managed to create an interesting volume, in which four articles deal specifically with translation and translators in scientific networks, such as the Royal Society and the Hartlib Circle; four articles with the translation of mathematics in very diverse contexts (from mining languages in Saxony to the humanist circle of Niccolò Leonico Tomeo); and four articles on the translation of philosophy which includes an article on Copernican rhetoric in the Ottoman Empire as well as an article on the potential function of a universal language in translation issues.

Q. What do you find particularly interesting and/or exciting about your discipline?

Oh, so many things! One of the greatest things about the topic of translation is that it opens the opportunity to work together with people from very different academic backgrounds. The volume illustrates that very nicely with contributors coming from classics, religious studies, history of science, literature, history of art, and history of philosophy. While all of us work on translation, we ask different questions, and have different methods to answer them, while sometimes investigating similar source material, or completely different sources. On the one hand that means that I need to be clear about what I am trying to do, and how I do that, and on the other hand, it gives me very often new perspectives on and ideas for my own work. And as you might have guessed, I find it hard to pick one discipline that describes best what I do. While I am an historian, I move between cultural and intellectual history and history of science, medicine, art, and translation. So in a way it would be fairer to ask what I find so exciting about my topic, namely that studying translation means I can bring together all these different disciplines.

Q. What makes this an important book?

It is an important book because it shows how central translation was to the circulation of knowledge in the early modern world. All the articles show how by investigating and analysing translations and translators we can learn more about these mechanisms of circulation, as well as the making of knowledge itself.

Q. Why did you choose this image for the cover?

The image (pictured below) is the title page of the 1662 edition of Noël de Berlaimont’s Dictionariolum et colloquia octo linguarum, etched by the artist Adriaen Lommelin. This dictionary of eight languages (Latin, French, Dutch, German, Spanish, Italian, English, and Portuguese) was aimed at merchants who are depicted in the image, busily gesticulating and talking. In other words, the dictionary is there to make sure everyone can communicate as smoothly as those guys. I was delighted when I found the image, as to me it captures the essence of translation (communication) on the one hand, and depicts the highly multilingual culture in early modern Europe on the other. Communication and multilingualism form the core of the book in many ways, while all the authors have tried to investigate their roles and impact in the developments of early modern science. 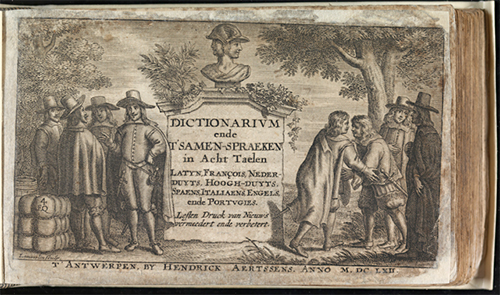 Image courtesy of the Koninklijke Bibliotheek in The Hague

One of the greatest things about the topic of translation is that it opens the opportunity to work together with people from very different academic backgrounds.