Q. How did International Black Radicalism come about?

Our CRASSH network on International Black Radicalism came about by pulling together several streams. Firstly, a group of us realised that there were/are many people researching multiple dimensions of racialisation, racism, and anti-racism across the University from a variety of disciplinary perspectives – sociology, politics, education, psychology, philosophy, history, English, African studies and Latin American studies, to mention a few. Our CRASSH network brings these people together into a collaborative dialogue. Secondly, the network engages with recent student-led activism to ‘decolonise’ the University. We pushed for this CRASSH network so that we could examine intellectuals, and intellectual systems of thought, that are traditionally excluded from the academy. Lastly, as organising members, each of us cares deeply about racism and all seek transformative justice, and we think a comprehensive examination of Black radicalism is important for this social project.

Q. By definition, a CRASSH Research Network has an interdisciplinary question at its core. What’s yours?

What is ‘international Black radicalism’ and how has it been changed in a digital age? Black radicalism has always been inter, or trans, disciplinary. To think of one story, CLR James (an historian who is also co-opted as the pioneer of cultural studies, with sociologists also owing a lot to him), gave a copy of his Black Jacobins to Martin Luther King Jr (a theologian, civil rights activist), via Louis Armstrong (a musician) – so we have the transmission of Black radical knowledge stretching across and influencing multiple disciplines, travelling across a network of Black radicals all of whom also came from different disciplinary backgrounds and brought a particular disciplinary perspective to issues of Black liberation. MLK Jr himself claimed that ‘Injustice anywhere is a threat to justice everywhere’ – Black struggle for liberation in one place is inherently connected to Black struggle globally. How has the digital age accelerated the internationalism of Black radicalism, as we have seen in Twitter revolutions against police brutality such as #BlackLivesMatter and #SayHerName? This question itself requires that trans-disciplinary network that Black radicalism has always relied upon.

Q. Could you tell us a bit more about this year’s convenors, speakers and attendees and the perspectives they bring to the discussion?

Convenors: The convenors represent three departments at the University of Cambridge: the Department of Sociology (Dr Ali Meghji and Tanisha Pratt), the Department of Latin American Studies (Rachell Sanchez Rivera) and the Faculty of Education (Daphne Martschenko and Sharon Walker). Their research addresses a range of issues including race and class, intersectionality theory, decolonial theory, race and medical sociology, the processes of racialised beauty, race, ‘biomedicine’ and biopolitics, and race and educational policy. This collaboration builds on past work to support the establishment of reading groups focused on theories of race and racism in their respective departments.

Speakers: The programme is supported by a range of speakers. Michaelmas term saw contributions from Dr Brian Alleyne (Senior Lecturer, Department of Sociology, Goldsmiths University) and Professor Hakim Adi (University of Chichester). In Lent and Easter term, planned contributions include Rachell Sanchez Rivera (Centre of Latin American Studies, Cambridge), Alicia Garza (Leader of the BlackLivesMatter group) and Journey to Justice (Volunteer led UK human rights education charity). When inviting speakers, the network has aimed to draw on intellectual contributions from academia (both well established and emerging), as well as from grassroot and activist social movements and organisations.

Attendees: We have been pleased to host attendees in Michaelmas 2018 from a range of disciplinary backgrounds. This has greatly enriched the groups discussions and sources of expertise. We have also been pleased to see participation from undergraduate students through to University research fellows. We hope to continue this rich exchange of ideas over the coming terms.

Q. What can we expect from International Black Radicalism in 2019?

We have a number of exciting discussions planned for 2019. In the first week PhD student Rachell Sanchez Rivera (Centre of Latin American Studies, University of Cambridge) will discuss performances of Black radicalism in a ‘colourblind’ era. This session will explore the global emergence of colourblind ideology, and how Black radicalism has countered transnational political discourses of post-racialism, post-racism, and mixed-ness. It will focus on the Latin American emergence of ‘mixed-ness,’ and how Black radicals sought to resist this colourblind racial rule. The second session, An Exception to Colourblindness: Black Consciousness in Apartheid South Africa, will focus on the question of how Black radical thinkers in South Africa – including Steve Biko and Nelson Madela – drew upon the thought of contemporary and past Black radicals, including Frantz Fanon, W. E. B Du Bois, and Angela Davis. In the third session we will discuss the role of international Black radicalism in international music. We will consider how Black radical thought from the 1970s emerged in the cultural sphere, particularly in music. By selecting four songs, two from the 1970s (Bob Marley’s ‘Slave Driver’ [1973] and G. Scott-Heron’s ‘The Revolution Will Not Be Televised’ [1970]) and two from the present day (Beyonće’s ‘Formation’ [2016] and Kendrick Lamar’s ‘The Blacker the Berry’ [2015]), we will discuss how each reflects on similar messages and connections to Black radical thought. In the final session, The Suppression of Black Radicalism: In Memory of Marielle Franco, we will consider how contemporary Black radicals are threatened by their political states and the police. Specifically, we will focus on how Black radicalism often leads to aggressive reactions from racial regimes, as highlighted by the recent murder of Afro-feminist activist Marielle Franco in Brazil. 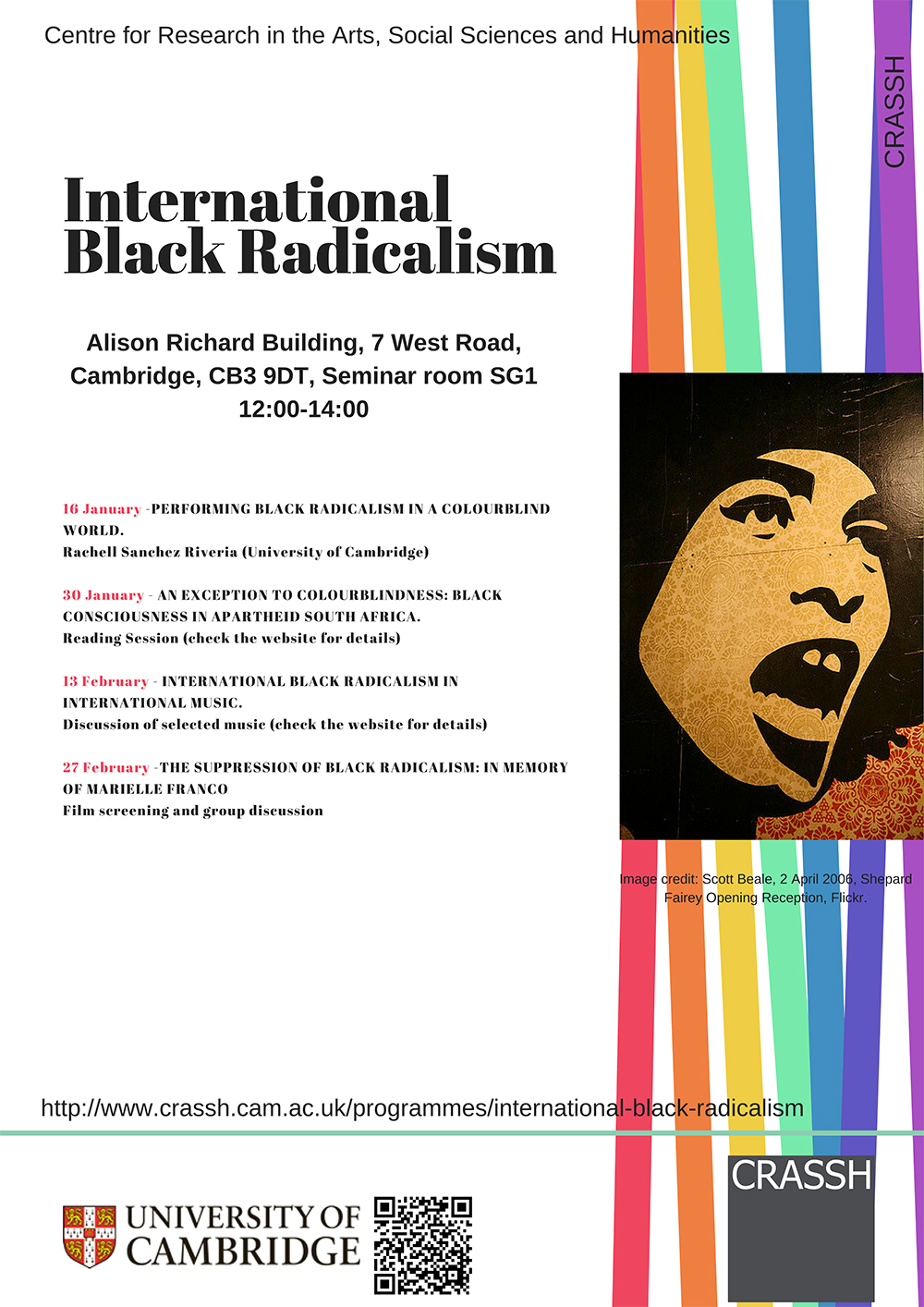 Q. How can people learn more about your network?

We welcome anyone and everyone to come join our network and discuss and learn more about international Black radicalism. We are an interdisciplinary group and our door is open to any members from any faculty and those outside of the university.

We meet alternative weeks during term time on Wednesdays from 12:00-14:00. You can follow along on our webpage to get further details on sessions, reading materials, and meeting location.

Please also join our Black Radicalism mailing list to receive updates on our upcoming events and session materials (crassh-black-rad@lists.cam.ac.uk). To request addition to our mailing list you can email Sharon Walker (sw703@cam.ac.uk) or Ali Meghji (am2059@cam.ac.uk).

Sharon Walker is a PhD Candidate in the Faculty of Education, University of Cambridge. Her research focuses on race and educational policy in the UK, and in particular the widening participation policy agenda in higher education.

Ali Meghji is a Research Fellow at Sidney Sussex College, and will join the Department of Sociology as Lecturer in Social Inequalities in September, 2019. He is a cultural, critical race sociologist of race and class.

Tanisha Spratt is a PhD Candidate in the Department of Sociology, University of Cambridge. Her research centres questions of (in)visibility in the lives of US patients with one of two chronic diseases (alkaptonuria and vitiligo). Specifically, she explores the role that social (in)visibility plays in the lives of patients from both disease groups who experience their disease in relation to other social identities that they simultaneously occupy (including race, class and gender).

Daphne Martschenko holds a PhD from the Faculty of Education, University of Cambridge. Her scholarship explores the social and ethical dilemmas of behavioural genetics research for the American education system, focusing in particular on how it engages with teacher perceptions of intelligence, race, and socioeconomic status.

We pushed for this CRASSH network so that we could examine intellectuals, and intellectual systems of thought, that are traditionally excluded from the academy.