Dr Marta Cacho Casal is a Postdoctoral Research Associate on the ERC-funded project Genius Before Romanticism: Ingenuity in Early Modern Art and Science. She is mainly interested in iconography, the education and social life of artists, history of collecting and material culture. 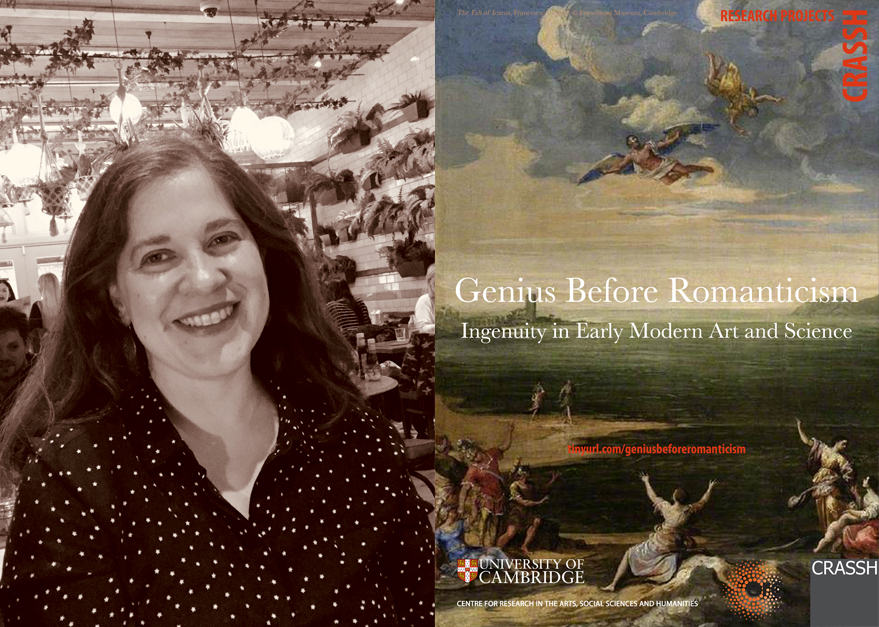 Q. Marta, you recently joined the Genius Before Romanticism team. Could you tell us a little about what the project is interested in?

The project approaches, in a multidisciplinary way, how the concept of ingenuity was used and understood in the early modern period. Rather than concentrating on the figure of (often artistic) genius which is the one we are all familiar with today, the project sees to study the culture of ingenuity which was widespread at the time in Europe.

Q. How does this topic relate to your own area(s) of interest? Have you worked on similar topics previously?

I am interested in artistic training and education of painters in Spain and Italy from the late sixteenth century. I have been working on artists’ libraries and my research fits nicely with the popular two-fold concept of ‘Ars et ingenium’, (skill, workmanship that can be acquired with practice versus Ingenuity that is supposedly innate). These opposing/complementary words were newly applied in the Renaissance to painters, particularly in relation to poets and writers.

I am interested in skill, theory and imagination and how these become subjects of debate among painters themselves. The term ‘disegno’ which can be translated as drawing but that meant, in fact, much more at the time, makes a good case-point for ingenuity: while anyone can learn how to draw, only good artists would possess the innate talent and quick wit to have disegno.

At the moment, I am working on two main outputs. One article will focus on the Self-portrait on an easel, by Bolognese painter Annibale Carracci, circa 1604 (The Hermitage, St Petersburg). This painting plays with art and illusion and I am interested in studying how some biographers contemporary to Annibale constructed his persona and turned him into what we can call an ‘ingenuity icon’. I am also working, along with my colleagues, on an innovative database which will include examples of visual culture of ingenuity. It has been really fun to source images for the database, which includes examples from all over Europe. I have been particularly interested in aspects such as Melancholy and artists’ studios, but some of my colleagues have been bringing in interesting examples of calligraphy, or fascinating emblems, which show just how much Ingenuity was a pan-European assertion.

Finally, we are excited to have organized an end-of-the-project conference in Cambridge in April, and a week later, most of the team will launch the database at the International congress on Visual Culture which will be held in San Juan, Puerto Rico.

• Get to know the CRASSH community.
• Read about Genius Before Romanticism: Ingenuity in Early Modern Art and Science.

I am interested in artistic training and education of painters in Spain and Italy from the late sixteenth century.