Since Alfred Brendel’s retirement from concert performances in 2008, he has continued to work around the world with young musicians and has given lectures, poetry readings and masterclasses with the Berlin Philharmonic and at London’s Wigmore Hall, in Hamburg and Paris, and at the Gesellschaft der Musikfreunde in Vienna, the University of California (Berkeley), Harvard University and the University of Zurich.

Alfred Brendel was the first pianist to record Beethoven’s complete piano works. Through his efforts, Schubert’s Piano Sonatas and the Schoenberg Piano Concerto were recognised as integral to the piano repertoire. During his sixty-year career, he performed regularly at the world’s musical centres and festivals, and with the leading orchestras and conductors. His extensive discography has made him one of the most respected artists of our time.  He gave his final concert appearance with the Vienna Philharmonic in December 2008. 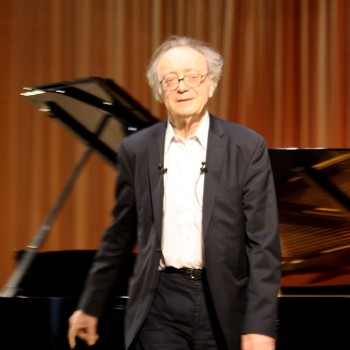