The Cambridge LASER talks (Leonardo Art Science Evening Rendez-vous) questions the separation and propagation of art and science as distinct categories of knowing and being. We ask: What is creativity in science and the arts? What is experimental practice in art, science, or philosophy? Where do scientific and artistic attitudes, inquiries, methods overlap? How do they differ and complement each other? Can such understanding help shape our technological, urban, economic, and environmental futures for an ecologically and socially sustainable life and wellbeing?

In this Cambridge LASER, we bring together ecologists, immunologist, and artists to discuss the preservation of biodiversity and our relations with the natural world.

Somewhere in the discussion about the preservation of biodiversity, it is essential that we start a dialogue about the false binary of human and non-human. Humans and non-human animals share the same genetic building blocks. Our basic needs are the same, as are some of the existential threats we face. Viruses and other pathogens make the jump between humans and non-human animals to devastating effect, usually through habitat encroachment, human-made climate change, and industrial animal husbandry practices. Moreover, humans have had a long and violent history of inhumanity towards other humans, based on ‘animalising’ the other, i.e. deeming them less than human. How do we move away from this unhelpful binary, and move towards an empathetic relationship with the non-human worlds?

In this session, join a conservationist, a veterinary virologist, a neuroscientist, and visual artists, in a conversation about new ways to think and talk about non-human animals. 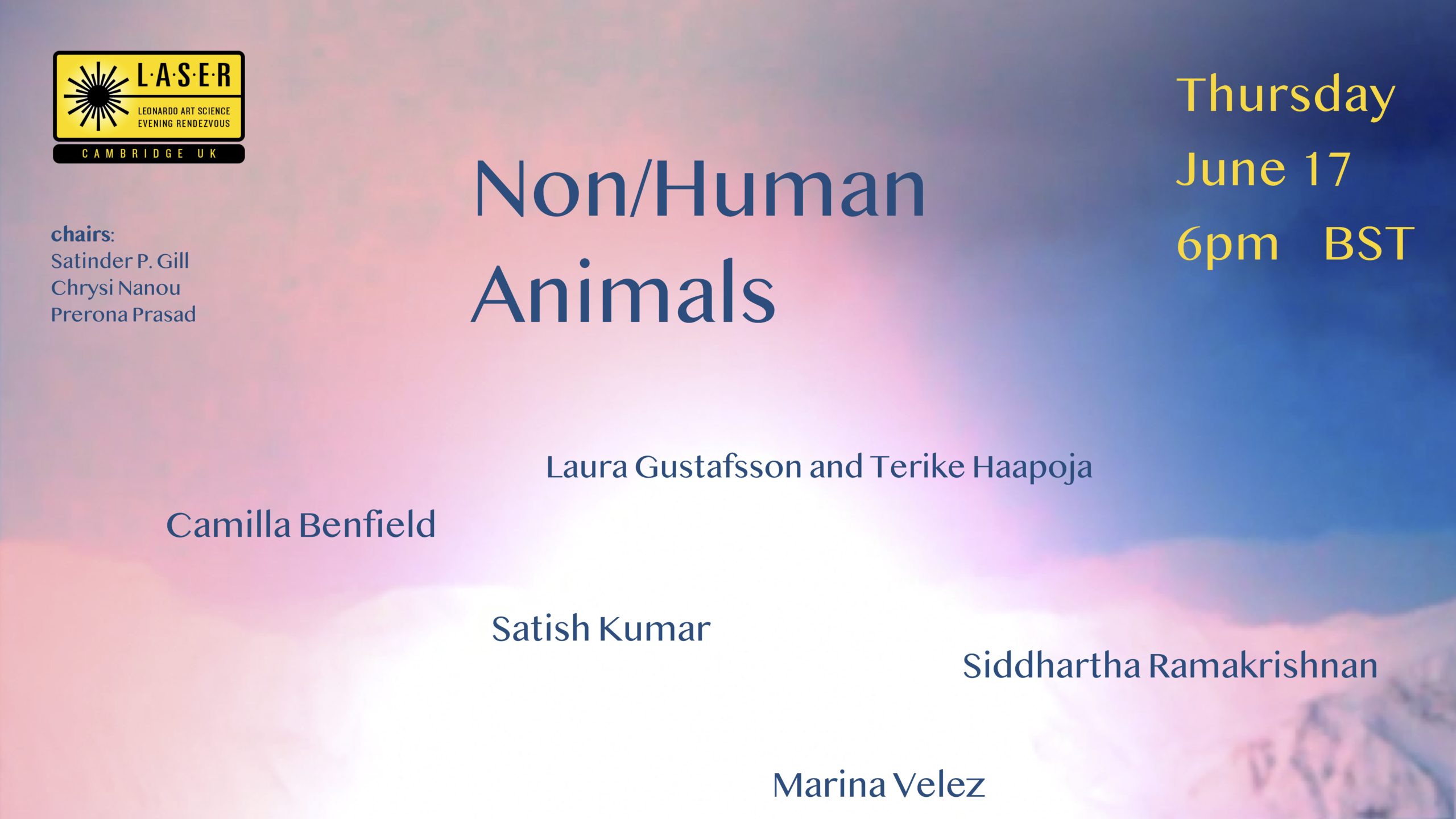 Camilla Benfield is a Senior Lecturer in Virology with expertise in molecular virology at the Royal Veterinary College. Her research interests are in emerging viruses and comparative innate antiviral immunity in humans and animals that are reservoirs or spill-over hosts for viruses. She is also RVC’s Course Director for MSc One Health: ecosystems, humans and animals. Camilla is currently working as a Consultant to the FAO (Food and Agriculture Organisation of the UN) on the Peste des petits ruminants virus (PPRV) Global Eradication Program

Gustaffson & Haapoja is a collaboration between visual artist Terike Haapoja and writer Laura Gustafsson. Their long-term project explores problems that arise from the anthropocentric world view of Western traditions, and seeks to open paths for ethical ways of interspecies coexistence coexist. By imagining histories according to other species, investigating how language enables othering, or mapping out the long history of animalization Gustafsson&Haapoja brings forth questions regarding the impact of biotechnologies, industrialization or systems of knowledge production on the lives of both humans and other animals.

Satish Kumar  Peace-pilgrim, life-long activist and former monk, Satish Kumar has been inspiring global change for over 50 years. Aged 9, Satish renounced the world and joined the wandering Jain monks. Inspired by Gandhi, he decided at 18 that he could achieve more back in the world and soon undertook a peace-pilgrimage, walking without money from India to America in the name of nuclear disarmament. Now in his 80s, Satish has devoted his life to campaigning for ecological regeneration, social justice and spiritual fulfilment.

Satish founded Schumacher College as well as The Resurgence Trust, an educational charity that seeks a just future for all. To join Satish in protecting people and planet, become a member of Resurgence (with 20% off) [1], entitling you to this charity’s change-making magazine, _Resurgence & Ecologist_.

Satish appears regularly on podcasts, radio and television shows. He has been interviewed by Richard Dawkins, Russell Brand and Annie Lennox, appearing as a guest on Radio 4’s Desert Island Discs, Thought for the Day and Midweek. Satish presented an episode of BBC2’s Natural World documentary series, which was watched by 3.6 million people. An acclaimed international speaker and author, Satish’s autobiography sold over 50,000 copies, inspiring change around the world. is a celebrated peace and environmental activist. For over four decades, he was editor of Resurgence, a magazine that approached issues of ecology, sustainability, and social justice in a holistic way. His autobiography, No Destination, first published by Green Books in 1978, has sold over 50,000 copies. In 1991, he cofounded Schumacher College in South Devon, which provides ecology-centred masters programmes, short courses and horticultural programmes. His commitment to animal welfare and compassionate living led to him being elected vice-president of the RSPCA.

Siddhartha Ramakrishnan is an Assistant Professor of Biology and the Jennie M. Caruthers Chair in Neuroscience at the University of Puget Sound. His research interests span the field of developmental biology, neuroendocrinology, and sensory-motor integration. Siddharth has also taught ArtSci courses at UCLA and The New School of Design, Parsons, and collaborated on exhibitions and documentaries with artists and architects. According to Siddharth, ‘Art and Science have long been thought to be completely divergent fields, but I believe that there is a lot to be discovered by blending the two…’

Marina Velez is an artist and researcher working across areas of contemporary art and sustainability. Marina’s practice addresses people’s behaviour and the social construction of values, placing emphasis on how values affect the protection or degradation of other species and the environment. Marina uses photography and video to explore and articulate these issues, focusing on the creation of spaces where values can be revised, discussed and transformed. She is a member of the Swiss Artistic Research Network and Art Research Circle 7 at the Nordic Summer University. She is also the founder and organiser of the Sustainability Art Prize and the Cambridge Sustainability Residency for Artists.

The event will take place via ZOOM webinar and YouTube. Subtitles can be enabled on both platforms.