Innovation hubs have become a popular type of organization for supporting collaboration and creativity in digital entrepreneurship. The African continent in particular has seen a wave of hubs: almost 130 have been founded since 2010. Hubs are small organizations, offering work space and networking events--yet, they aspire to "build" entire entrepreneurial ecosystems. For this seminar, I will discuss the organizational processes that African hubs trigger. In-depth case study data (including 119 interviews with 133 participants) were collected for ecosystems in Kigali, Harare, and Accra, which included six hubs (incidentally two per city). I find that hubs clearly differ from known organizational forms of entrepreneurship support such as incubators, but also from newer forms like co-working spaces. Hubs have “fluid boundaries:” social and symbolic boundaries exist around hub communities, but they are permeable and changeable. I argue that we need to move away from traditional understandings of incubators if we want to understand hubs and other new forms that are informal and community-driven. Instead of seeing hubs as mere service providers, I propose that they "assemble" tech entrepreneurs, by convening, interconnecting, and activating them. Through comparative analysis across the six hubs, I show that assembly can be a powerful process of co-creation, but also that it is highly fragile. Ultimately, my analysis suggests that we need to radically rethink what organizations like hubs can and should be expected to do, and how they impact the entrepreneurs that they are meant to help.

Open to all. Limited places. To reserve a place, please register here https://www.eventbrite.co.uk/e/assembling-entrepreneurs-promises-and-pitfalls-of-innovation-hub-organizations-in-africa-tickets-26279538808

Part of the Science non Fiction and the Bottom Billion: Envolving Fairer Frameworks for the Future Research Group, series.

Technology for the Bottom Billion Workshop 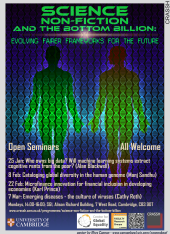 Emerging Diseases: The Culture of Viruses

Cataloging Global Diversity in the Human Genome: Promises and Pitfalls