In Sarah Turner’s Public House (2016) a chanted invocation rings out “vodka and lime, port and lemon”. This looped, inadvertent poetry is heavy with history, and its voicing causes traces of the past to seep through the walls of The Ivy House pub, SE15. Fully locatable neither to Peckham Rye nor to Nunhead, it is a space that is both specific and obscure. Under the shadow of closure and redevelopment, this is disputed territory in many senses.

The Ivy House is a resonant space of memories. It is not too far from where William Blake had his first visions c.1765. On one of his earliest psychogeographic dérives, the child Blake saw a “tree filled with angels, bright angelic wings bespangling every bough with stars”. These were the angels of Peckham Rye: bearing witness to chthonic energies and the power of the Word. Now, in the liminal space of The Ivy House, the angels are perhaps with us again, bearing witness to the power of a repeated drinks order.

Public House documents a community and the operation of collective action: the sale is blocked, the building listed, and legislation interpreted to register the pub as an Asset of Community Value under the Localism Act 2011. Ultimately, The Ivy House is claimed by its community. Having closed in April 2012, it reopens in March 2013, becoming London’s first cooperatively owned pub, purchased under the right to bid provisions of the 2011 Act.

As the film opens it becomes clear that this is no passive document. As a procession leaves The Ivy House a chalkboard to the right of the entrance proclaims “Event – Sunday 1st March – Mass Assembly For Public House Film!”. It is active. 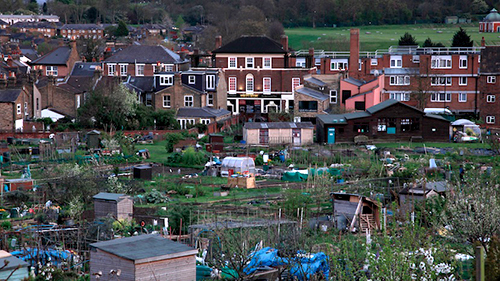 With such a committed social focus one could have expected a film placed squarely within the vérité tradition. But Public House instead carries a powerful subjectivism that resonates with Turner’s previous work. It can be seen as the final part of a trilogy, with Ecology (2007) and Perestroika (2009). In these films we are never too far from Blakean visions. They all explore the intersection of psychogeographic, social and environmental space. It is akin to the notion of residual haunting explored by Nigel Kneale in The Stone Tape (1972), where the history and experience of a place is accessible by way of its buried memories.

Ecology (2007) considers ecological concerns alongside our psychic landscapes and relationship with time. Three members of the same family recount the same violent moment, in the space of a Majorcan eco-retreat. Memory haunts the medium: shot on multiple formats and incorporating still images, the moment can be captured, but such capture does not equate to a resolution. There is also a sense of ritual here. As if working with a shamanic proxy, Turner processes her own experiences of the retreat through the imagined multiple perspectives of the family. The sequences can be screened in any order. It is unstable, personal.

Taking these themes further, Perestroika (2009) is a modernist ghost story. Turner combines footage of two trips taken on the Trans-Siberian Express two decades apart. In the intervening period a close friend and companion on the first journey suffered a fatal head injury while cycling in the region. In Perestroika, reflecting its translated meaning “restructuring”, we see (mirrored in the train windows) an alternate “Sarah Turner”, an avatar. The constructed “Sarah Turner,” suffering from amnesia as a consequence of her own cycling accident, is on something of a quest: to revisit trauma and regain memory. This is not just a geographical return, there is a sense of ritual re-enactment: a productive doubling. Perestroika emphasises that recording in all forms is a creative act. Its processes make manifest the productive power of witness. The archival soundscape, which is dominated by the voices of lost friends, bleeds into the fictional journey. Perestroika is concerned with the power of story-telling and “pictures that we make that reinforce our stories.” But at the same time, it reminds us that “pictures are not a record.”

Turner’s framing narration moves from reportage to poetry, and finally elemental visions of earth, air, fire and water: an oil-ridden Lake Baikal is seen to be aflame. The narration starts to observe “you”. The boundaries between fact and fiction, psychic and physical, past and present are fused and broken down: the visionary sees. The temporal distortions work as markers of a successful ritual. It is a process of solve et coagula: as if referencing the fracture and “end of history” which the perestroika movement had brought to the land during the interregnum between the “real” and “fictional” journeys, and the end of a personal history.

In Perestroika the liminal space of the train is noted as an unheimlich public/private space. This is echoed in Public House. The term itself queers ideas of home. The adjective becomes a noun: the punters go down their “local”. More specifically, Turner, herself a ‘local’ (and eventual community shareholder) uses the film to show that through the power of collective action and memory, the typical story of lost community spaces can be rewritten. The themes of process developed through Ecology and Perestroika, here evolve into something akin to a participatory group ritual. The film is a working: part document, part intervention. 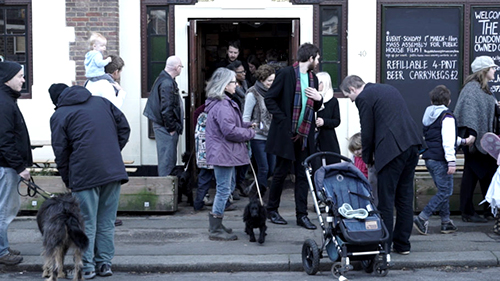 In Public House, there is no single voice: it is a polyphonic opera. The film opens with a procession out of the pub, over which memories of the past are narrated: wartime, when it was called the Newlands. But our expectation of a conventional narrative framing is quickly undermined as a choir of voices take over. We strain to overhear and follow the trail of a story: like cledonomancy, we make our own meaning. We bear witness. The geography of the Ivy House is carved out by these histories: reflecting Doreen Massey’s description of space as “a pincushion of a million stories”. This psychogeography defies linear time as we spiral between past, present and future. The soundscape of overlapping memoirs haunts scenes of the empty space of the pub: a bottle of champagne bought for £3.50 in 1974 on a last day of school and shared between twelve; memories of good music and bad lighting: like “some ancient temple that hadn’t been seen for centuries”.

Cognitive scientist Cristine Legare notes the social functions of ritual. Rituals are about process. They assist with group living, allowing the formation of a group identity, in all its diversity. Public House is punctuated by a curious shamanic channelling of experience, through spoken word performances of the Ivy House memoirs of others. Longstanding locals’ stories come out of the mouths of newcomers. It suggests a power in heterogeneous unity. The mundane is elevated to the epic. The power of the word is attested to: storytelling is productive.

The processes here take the form of typical pub pursuits: chatter and confession, spoken word, dance, song, play. In the space of the social imaginary, we create our collective life.

Testimonies are given: the soundscape is a participative record of memory. Locals remember a communal domestic space, like “opening up a curtain to another world”, where they could light a fire, bring in food from home. Stop motion tableaux document the views from The Ivy House: a fertile pastoral of Peckham allotments. The voices become more anxious with tales of closure and residential redevelopment: “gutted”, “how could they do that” and an exclaimed, indignant “flats!”. Tea lights are placed on the floor like a memorial. We see a skip. A tattered makeshift blue plaque attests that “Dr Feelgood played here lots in 1970s”. Finally, an ominous phrase: “we played the closing down gig”.

But then, a restructuring: the new community management team take the stage to reopen the pub. A swing class, a thirties dance style in a building from the era. A local choir rehearses. The performance of a children’s play unintentionally summons Blake’s angelic stars when a boy hits the switch for the mirror ball. Thoughts turn to “what does it mean to be local?”. 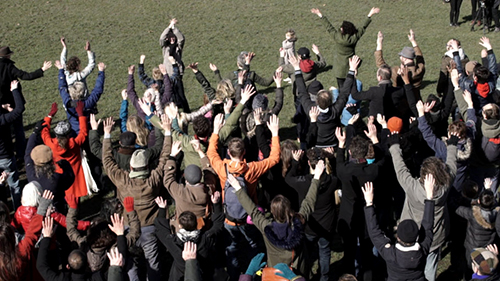 We move from fact to fiction, document to vision. The swing class becomes a queer noir set piece; we catch glimpses of footage from this film screened in the pub. Public House explores manifestation in all senses: protest and productive affect. The film’s closing stages are concerned with returns and completion. We rejoin the procession from The Ivy House, following them onto Peckham Rye Park. In a ritual reconfiguration of William Blake’s angelic witness, the “mass assembly” celebrates resistance and individuality in diversity. They spin with mirrors palm-up towards the heavens, or reflecting each other and flaring into the camera lens. Tea lights now displaced from the pub to the earth: an offering. The collective energy generated in The Ivy House action has spilled out into the open. A choreographed dance sequence reflects the arcane rules of a ritual working: a child bears a mirror ball, like a carnival queen. The choral snippet heard earlier in the film, bursts forth. Extracts of a poem (after Blake) written by Jane Yeh for the film are sung and whispered by the assembly: “Glitter in the trees” … “Stars in the dark, our collective dreams.” A completed invocation.

A swing class, a thirties dance style in a building from the era. A local choir rehearses. The performance of a children’s play unintentionally summons Blake’s angelic stars when a boy hits the switch for the mirror ball. Thoughts turn to ‘what does it mean to be local?’.