This article is republished from The Conversation under a Creative Commons license. Read the original article.

You might not be able to stomach soybeans for breakfast, lunch and dinner, but the animals you eat do. Cultivation of the staple crop takes up an area five times the size of the UK, and 85% of that area is used for animal feed. Thanks to projected rapid growth in both world population and in the meat-eating global middle class, demand for soybean is set to grow 80% by 2050 – more than any other staple crop.

With arable land at a premium, our desire for animal products is already responsible for the deforestation of vast swathes of the Amazon and other rainforests. This massive increase in demand is likely to lead to a whole lot more destruction, at precisely the time when we need to be curbing what is the second biggest cause of global warming.

But this destruction is not yet a certainty. I recently travelled to Iceland to investigate a cutting-edge commercial technology that soups up photosynthesis. It could help save the bio-diverse, CO₂-sucking ecosystems that are so vital to the health of our planet.

Light, carbon dioxide, and water are what give plants life. Through photosynthesis, plants convert these three ingredients into the vital carbohydrates needed to flourish and blossom. But conventional agriculture has surprisingly little control over these factors. It’s dependent on the sun to shine, and while irrigation has substantially improved crop yield, water scarcity is often an issue for farmers. 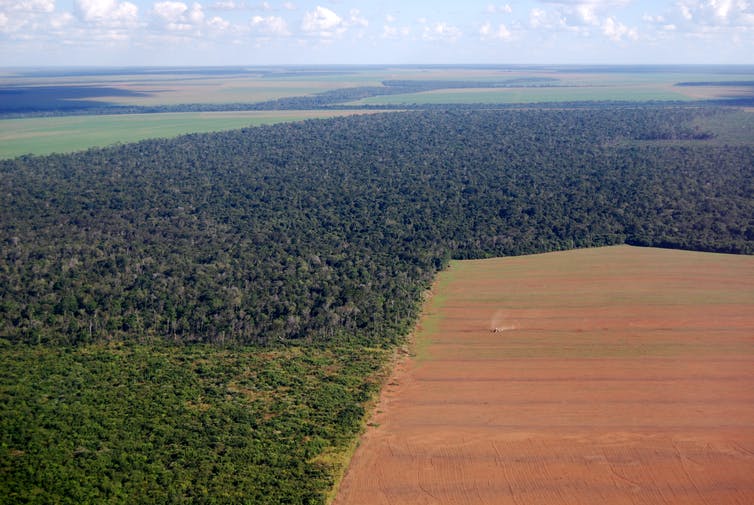 A soy field eating into the Amazon rainforest. Frontpage/Shutterstock

This novel method, trialled in Iceland’s Hellisheidi geothermal park, swaps sunlight with LED light, fresh water with saltier “brackish” water, and ambient air with concentrated carbon dioxide, controlling their concentrations in innovative modules called photo-bioreactors. Think of them as nuclear reactors, except with concentrated CO₂ and light as the inputs and organic material as the output.

These photo-bioreactors are designed to grow not soybeans, but plant microorganisms. In tubes of different shapes and sizes, fluids rich with micro-algae are stirred carefully, and exposed to light, water, and CO₂. Using the same logic as systems designed by NASA for space travel, they recycle carbon, phosphorus and nitrogen. Compared to conventional agriculture, these closed-loop modules allow for much greater control and measurement of fertilisers and water, use CO₂ more efficiently, are at lower risk of crop loss from contamination, pests, and storms.

Most importantly, they maximise the efficiency of the key ingredient in photosynthesis: light. By keeping the microalgae fluid constantly moving and closely regulating temperature and harvest timing, these microorganisms are exposed to the maximum healthy amount of light, shedding the natural constraints of the day-night cycle and the weather. 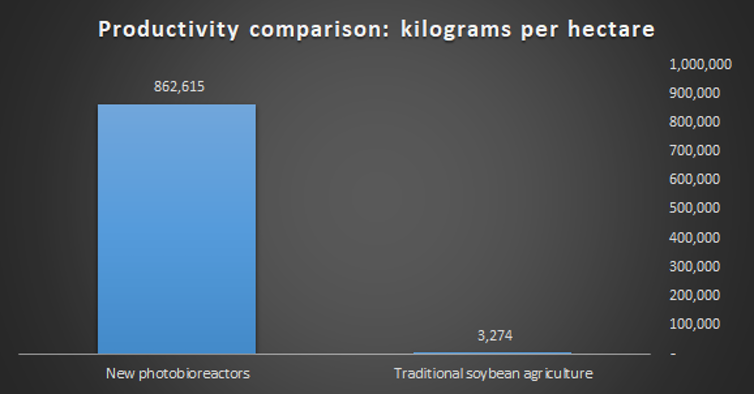 Quite a difference. Asaf Tzachor

Using this technique, photo-bioreactors can provide similar nutritional content to soybeans at less than 0.6% of the land and water use. A production unit uses 130m² to grow 10,500kg of biomass per year – a 200-fold improvement in resource efficiency.

The reactors have a minimal ecological footprint. Iceland’s reactors are powered geothermally, and can be paired with any form of renewable electricity. After the carbon costs of production, they are net absorbers of CO₂. They eliminate the need for pesticides and herbicides. They can be placed on unproductive lands, and can be stacked vertically like LEGO bricks. The modular design could even be deployed in city centres.

Crucially, the technology is cost-effective. Thanks mainly to the commercialisation of cannabis, LED technology is now much cheaper and more efficient than before, and other recent engineering innovations have further reduced costs. If the monetary costs of the environmental and social harm caused by soy cultivation are taken into account, micro-algae now represent much better value for money – albeit with a higher level of initial investment required for producers. While the shift from conventional agriculture to technical skills would require a short period of intensive training, for both farmers and states this cost would be far outweighed by greater profits and ease of production. 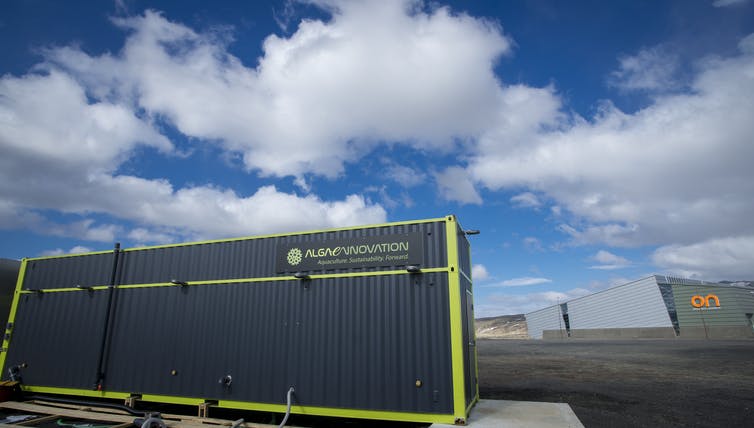 Less colourful on the outside. Pétur Már Gunnarsson

Further trials are needed to prove that a fully microalgae-based diet is not detrimental to animal health in the long-term, but research suggests that they have the potential to feed chicks, hens, pigs, and cows. Photo-bioreactors could already be used to grow microalgae strains that are suitable for human consumption too, such as popular health food spirulina.

The livestock economy, like many other industries, tends to be resistant to change. But these alternative food systems are now attainable, and if backed by soy-dependent governments, the technology could save millions of hectares of rainforest, and provide space for the rewilding of already deforested areas. As the pressure on countries to cut emissions hots up, such a switch is likely to become increasingly attractive.

It could also free up valuable land and water resources to feed a population that is expected to increase by half in the next 80 years. With more extreme patterns of deluge, drought, and crop failure expected as the planet warms photo-bioreactors like these could avert famine for millions. As with many of the planet’s existential problems, the solutions are out there. We just have to implement them.

Asaf Tzachor is a Research Associate and Lead Researcher for Food Security at the Centre for the Study of Existential Risk.