Conference convenors Anna Maria Del Fiorentino and Alexandre da Trindade tell us about their recent conference ‘The role of education in the fake news era’, held at the Faculty of Education on 24 May 2022.

Why did you choose to apply for support from the CRASSH conference competition?

We decided to apply because we needed further resources and expertise in organising a big event such as ‘The role of education in the fake news era’. We ended up having a hybrid audience of 180 people (in person + online) and we couldn’t do it without further help.

The ethos of CRASSH is highly in tune with ours which is to create interdisciplinary dialogue across the University as well as to build bridges between different groups and share knowledge with a broader audience. We learned a lot on the way and we are very grateful for the brilliant support received from Nicki and Judith.

What were you hoping to achieve from the conference?

We were hoping to have a broader discussion around education and misinformation – a work of education in itself – aiming to bring forward a collective reflection about how ‘fake news’ is a threat to our democracies. We wanted to connect academia and wider society and for that, we invited guests that are not only academics (Márcia a philosopher and professor at University Paris 8 and Jean a former lecturer at Harvard, currently doing his PhD at the University of Barcelona) but they are also public figures in Brazil (Márcia and a group of women led a TV show in Brazilian television, and she is also a writer of academic and non-academic books, and Jean was a federal MP and is also a writer), capable of communicating to a broader public in a more understandable way, a powerful tool to engage academics and non-academics in conversations.

We also aimed to share information as widely as possible, giving back the knowledge produced in such a prestigious institution as Cambridge University, to broader society. We made our event free of charge, we organised a big room to receive the people who came to the Faculty of Education and also had the event broadcast in real-time for those who registered. On top of that, as Brazilian students debating urgent contemporary Brazilian issues, we offered the transmission of the event in two languages for our online audience, enabling non-English-speaking Brazilians to follow and engage in our debate in Portuguese. 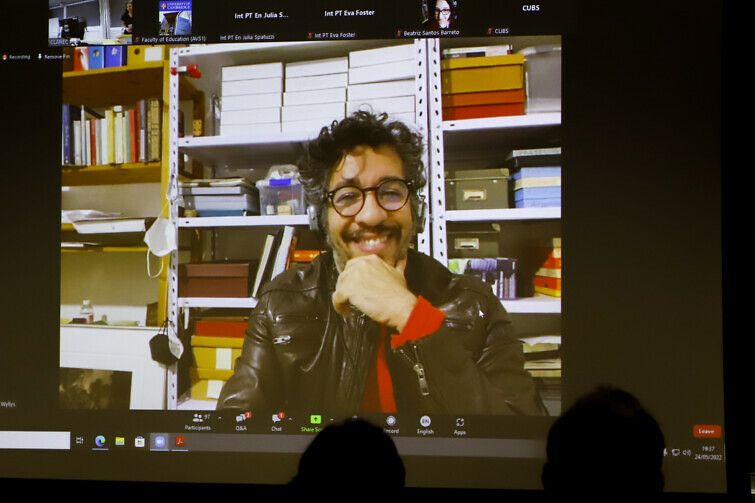 What was the highlight of your conference?

The highlight of our conference was the richness of the conversations we were able to achieve when putting together scholars of the University of Cambridge and our guest speakers. We had a variety of elements at the event, starting with the premiere of the documentary ‘The Coup d’État Factory’, introduced by London-based writer and director of the film, Victor Fraga, followed by a book signing session of Márcia Tiburi’s latest book ‘The Psycho-Cultural Underpinnings of Everyday Fascism’ (Bloomsburys, 2021) and continuing with a two-hour panel discussion between our guests, chaired by Haira Gandolfi, lecturer at the Faculty of Education at the University of Cambridge.

We believe that the debate on the role of education in dealing with the threat of fake news is still timid, and needs more initiatives like this to gain strength for proposals to change educational policies, as explained by the event’s guest speakers Haira Gandolfi and Márcia Tiburi in this post-event interview. 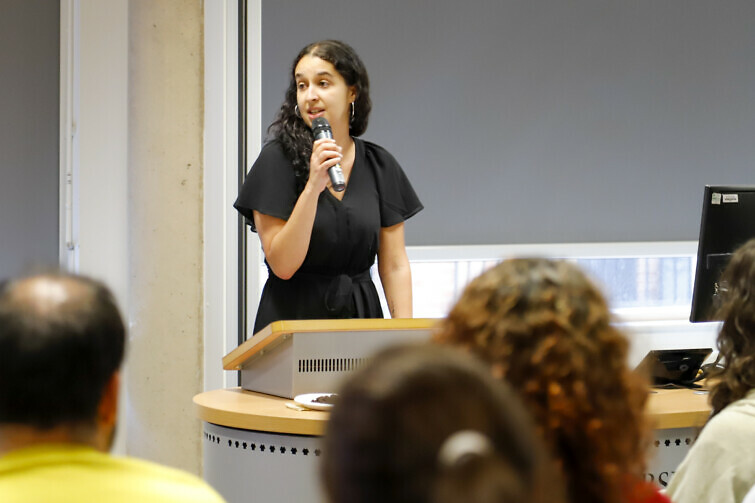 Haira Gandolfi speaking at the conference.

Two of our guest speakers, Márcia Tiburi and Jean Wyllys are well-known individuals from Brazil that had to leave the country after death threats received from the far-right, bringing to the discussion their hopes of reclaiming humanity back by collectively working with and educating people who are victims of misinformation and hatred. Together with CUBS (Cambridge Brazilian Society), we introduced the newly created ‘Sabiá Award’, and Márcia Tiburi was the first individual to be honoured receiving it for her outstanding contribution to democracy in Brazil, and her fight for women’s rights. 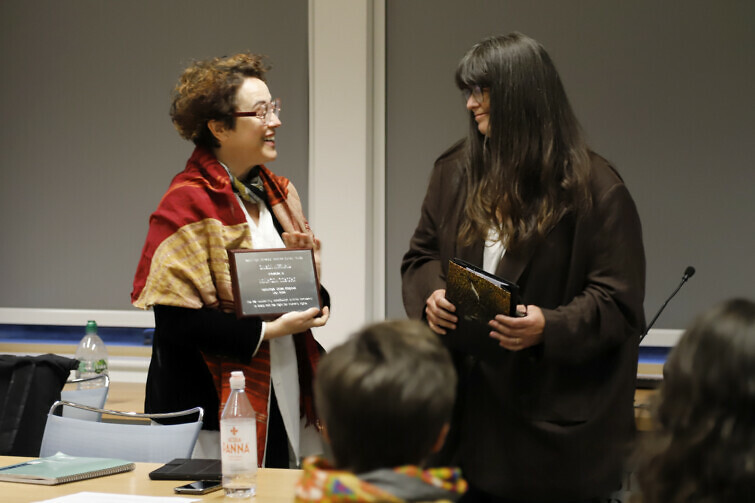 How has delivering this conference helped your research?

The in-depth conversations explored in our event about how psycho-authoritarian systems of the 1930s that led to a world war in the past, are making a comeback since Trump’s election in 2016, are key to understanding ‘fake news’ as a political phenomenon, designed for financial profit, as highlighted by our speaker Jean Wyllys.

For those like us doing research in education, it is extremely helpful to understand how the revolution of social media is already negatively impacting our educational system – and it is particularly damaging in the case of Brazil where there is an enormous deficit in quality education – as scientific consensus started to be contested by students, contesting their teachers with lies and conspiracy theories they saw on the internet.

The idea that we as researchers have an important role in fighting ‘fake news’ is particularly helpful to our work, as education is the archenemy of misinformation. Therefore “all our thoughts should be made to stop fake news”, against the psycho-power created by the spread of lies, as pointed out by our speaker Márcia Tiburi, by combining academia and activism against ‘fake news’ if we want to preserve our freedoms and democracies.

It was also enriching to hear Dr Haira Gandolfi discussing the critical and political role of education as a means of raising consciousness and transformations based on the thoughts and theories of the educator Paulo Freire.  The relations between Freire’s thoughts and the present threat of fake news, media bias and manipulation addressed in the event contributed to a better understanding of domination projects that mainly affect the Global South. 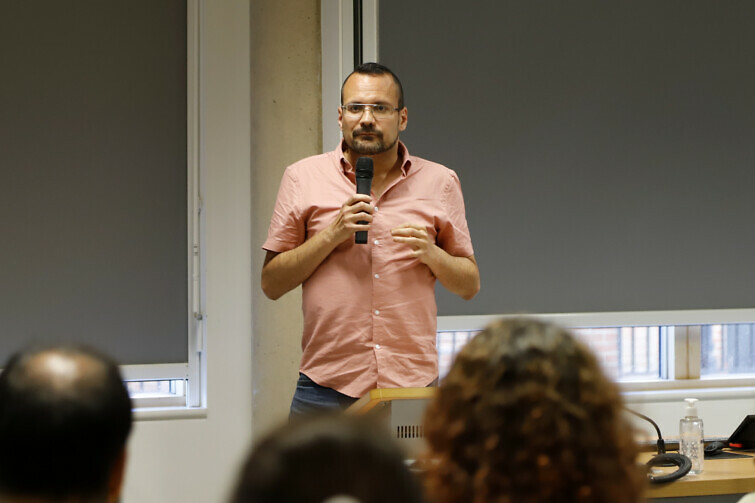 Victor Fraga speaking at the conference.

What top tip would you give to future conference convenors?

There is not a formula when you are organising an event like that. Use inspiration from other events you have attended but, above all, design yours based on your principles and objectives and dare to bring in new formats and innovative approaches. The key is to gather like-minded people that share the same ethos behind the event. We counted on the support and enthusiasm of so many others and that is what made our event possible and successful.

Starting from the impact you want to make with the event, try to broaden connections in terms of allies that could be interested in what will be presented and debated (e.g. try other departments and also outside academia to bring other perspectives to the topic; look for other ways to present and discuss the theme – in our case, we combined a seminary format and the screening of a documentary film; broaden the way of communicating your event so that other audiences get to know about it – we tried to publicise it on academic channels, but also by putting up posters around town for people in the community to join in the debate; and throughout the organisation let yourself go with other ideas, the planning can be enriched if you are open to new possibilities along the way. 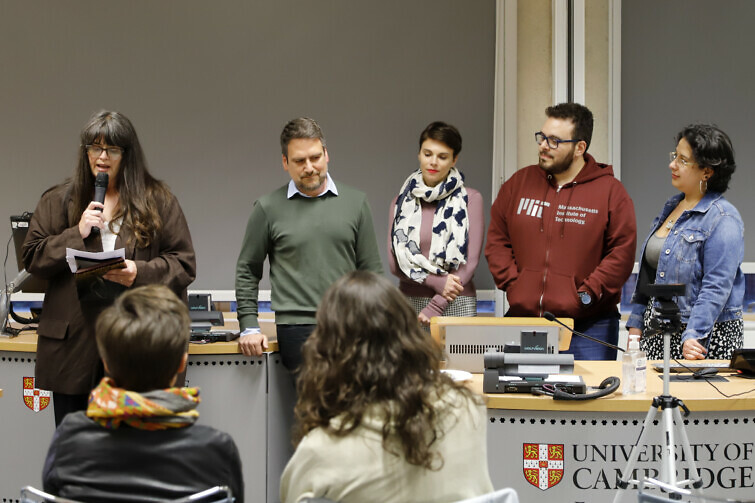 How can people find out more?

We had local media coverage about the event by the Cambridge Independent, who interviewed ourselves and two of our speakers before the event and posted an article about Márcia Tiburi speaking at the conference.

We also had coverage on the Faculty of Education’s website with ‘Academics and activists explore the role of educationin the age of fake news’ and ‘Young people need ‘education for communication’ to negotiate fake news’.

Watch a recording of the presentations and panel discussion:

You can follow more of the work we do at CLAREC (Cambridge Latin American Research in Education Collective) and CUBS (Cambridge University Brazilian Society).

We were hoping to have a broader discussion around education and misinformation – a work of education in itself – aiming to bring forward a collective reflection about how ‘fake news’ is a threat to our democracies.