In his preface to a French reissue of On liberty, Pierre Bouretz emphasizes the “unfathomable ignorance” that currently exists in France with respect to John Stuart Mill’s writings and ideas. To be sure, compared to the English-speaking world, the interest in Mill does not seem to be very vivid among French scholars. But, as Bouretz also rightly underlines, this “ignorance” is mostly a “lapse of memory”, for a mere cursory survey indeed shows that numerous books and writings by Mill had been translated in French quite quickly: The Principles of Political Economy in 1854, On Liberty in 1860, Considerations on Representative Government in 1862, The System of Logic in 1866-67, etc. Accordingly, the first goal of my research project is to provide an extensive survey of the history of the translation and diffusion of Mill’s writings thanks to an appraisal of the various intellectual and sociability networks it depended on. What is to be explained is the reason why the people in charge of these translations and their publishing decided to carry them out in the first place.

This question naturally leads to the second element of Mill’s reception: what did people find in Mill and how did they react to what they found? Once again, there is evidence that Mill’s ideas were genuinely popular in some sections of the French intellectual community, for instance among French fin-de-siècle liberals such as Charles Dupont-White, among some leaders of the French feminist movement, and among the founders of the human sciences (such as, for instance, Théodule Ribot, the first chair in psychology at the Collège de France). But there was also an interest in Mill’s philosophy, in his logic, and his ethics. The second goal of my research project is to go deeper into this positive reception of Mill’s thought in France so as to be able to chart clearly the uses made of his ideas in various fields.

However, it can also be shown that there happened to be some kind of critical convergence towards the rejection of other crucial aspects of Mill’s thought: the rejection of Mill’s utilitarianism and his consequentialism by the Kantian-oriented tradition that was predominant in France at the turn of the century ; the refutation of Millian empiricism and inductivism by key French philosophers of science such as Léon Brunschvicg or Émile Meyerson ; the criticism, most notably carried out by Durkheim in his Règles de la méthode sociologique (1895), of the methodological assumptions of the Millian conception of the “moral sciences”; and, eventually,  the ethical indictment of Millian intellectualism by conservative and reactionary circles, as illustrated by some of the writings (especially in his Journal) of Maurice Barrès. This critical convergence might well explain the long disappearance of Mill’s ideas from the French intellectual landscape. To put it shortly, it was not the case that Mill had not been read in France; in fact, his works had received a fair share of attention, but failed to become acclimatized because they were at odds with many of the strongest trends in French intellectual and cultural life. Accordingly, the narrative I will be offering will be mainly that of a “rendez-vous manqué” between the English philosopher and his French audience.

During my stay at CRASSH, I would like to address two crucial features of the reception of Mill’s ideas in France: first, the role played by the political economists gathered in the Société d’économie politique and by the sociability network existing around Gilbert-Urbain Guillaumin’s publishing house in the early translation and diffusion of Mill’s economical and political ideas (with a special emphasis on Mill’s malthusianism, which sparked a much heated debate in these circles); second, the global rejection of Mill’s utilitarianism, not only by the Kantian-oriented tradition that was then predominant in France but by the vast majority of professional philosophers and publicists alike. In other words, I would like to focus on the difficult transplantation of Mill’s ethical ideas on French soil.

Vincent Guillin is a Visiting Fellow at CRASSH, Easter 2013.

He is Assistant Professor in the Department of Philosophy at the Université du Québec à Montréal, where he teaches the history and philosophy of the human sciences and modern philosophy. Vincent was awarded his PhD in Philosophy from the LSE in 2006, for a thesis on Auguste Comte and John Stuart Mill on Sexual Equality (published as a book by Brill in 2009). From 2007 to 2009, he was Maître de conférences associé in the Chair of Philosophy of the Biomedical Sciences at the Collège de France (Paris). His current research interests center on the French reception of John Stuart Mill, the history of religious psychology and the history and philosophy of experimental social engineering. 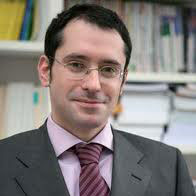