Joe is currently a Postdoctoral Research Associate on the ERC-funded project Crossroads of Knowledge. Previously, he completed BA, MPhil and PhD degrees all as a member of Christ’s College, Cambridge, where he has also been a Bye-Fellow and Supervisor in English.

Joe is currently in between two major research projects. The first, which made up his doctoral work (and which he is currently in the process of bringing to press) was a study of the influence that sixteenth- and early seventeenth-century mathematical culture exerted on popular drama in the final decade or so of Elizabeth I’s reign. The second project aims towards a new biographical study of Renaissance England’s most brilliant mathematician: Thomas Harriot. Employed by Walter Raleigh, and then by the ‘Wizard Earl’ of Northumberland, Henry Percy, Harriot made groundbreaking, often controversial discoveries in the mathematical fields of algebra, optics, mechanics, navigation, astronomy, and what would later become calculus. In parallel with his mathematical pursuits, he travelled to discover the New World, devised a method for learning and speaking Algonquian, introduced pipe tobacco smoking to England, and was accused of promoting a dangerous brand of atheism linked to his mathematical philosophy. My research on Harriot aims to promote his polymathy, by considering the deep intersections between his mathematical and non-mathematical work.

Joe is not attached to any single strand of the Crossroads of Knowledge project, but rather is helping to bring all four strands of the project together it enters its late stages. Mathematics is uniquely well poised to assist in this task, because, in the early modern period, the subject came increasingly to envelop economics, and natural philosophy, as well as substantially inform legal and theological thinking. 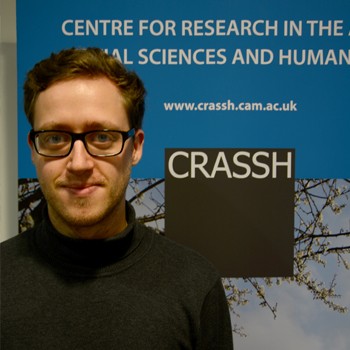