Literature as Archive II: Reading and Conversation with Elias Khoury and Susan Abulhawa

This is an online event hosted via Zoom. Please register in advance for this reading here or click the Registration Online button.
Time: 17:00 GMT, 12:00PM EST, 19:00 EET

Hanna Morgenstern (University Lecturer in Postcolonial and the Middle East Literature, Cambridge University and a Fellow at Newnham College)

Hilary Rantisi (Associate Director of the Religion, Conflict and Peace Initiative and Senior Fellow at the Religious Literacy Project at Harvard Divinity School) 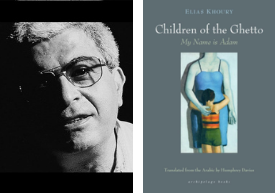 Elias Khoury, born in Beirut, is the author of thirteen novels, four volumes of literary criticism, and three plays.  He was awarded the Palestine Prize for Gate of the Sun, which was named Best Book of the Year by Le Monde Diplomatique, The Christian Science Monitor, and The San Francisco Chronicle, and a Notable Book by The New York Times. Khoury’s Yalo, White Masks, Little Mountain, Gate of the Sun, The Journey of Little Gandhi, City Gates, and Children of the Ghetto are also available in English. Khoury is a Global Distinguished Professor of Middle Eastern and Arabic Studies at New York University, and has taught at Columbia University, the Lebanese University, the American University of Beirut, and the Lebanese American University. As Though She Were Sleeping received France’s inaugural Arabic Novel Prize. 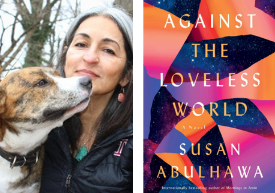 Susan Abulhawa is a novelist, poet, essayist, scientist, mother, and activist.  Her debut novel Mornings in Jenin (Bloomsbury, 2010), translated into 30 languages, is considered a classic in Anglophile Palestinian literature.  Its reach and sales has made abulhawa the most widely read Palestinian author.  Her second novel, The Blue Between Sky and Water (Bloomsbury, 2015), was likewise an international bestseller.  Against the Loveless World (Simon & Schuster, 2020) was out in August.  She is also the author of a poetry collection, My Voice Sought The Wind (Just World Books, 2013), contributor to several anthologies, political commentator, and frequent speaker.  Abulhawa is the founder of Playgrounds for Palestine, a children’s organization dedicated to uplifting Palestinian children.  She is also co-chair of Palestine Writes, the first North American Palestinian literature festival.

Dr Hana Morgenstern is a scholar, writer, and translator. She is University Lecturer in Postcolonial and Middle East Literature at Cambridge University and a Fellow at Newnham College. Dr Morgenstern is co-director of the Documents of the Arab Left and the Revolutionary Papers projects and co-convener of the Archives of the Disappeared seminar. She is currently at work on a book manuscript titled, Literary Infiltrators: Anticolonial Collaboration in Palestine/Israel.

Hilary Rantisi, Associate Director of the Religion, Conflict and Peace Initiative and Senior Fellow at the Religious Literacy Project at Harvard Divinity School.

An event from Archives of the Disappeared: Discipline and Method Amidst Ruin Network series and co-organised with Literatures of Annihilation, Exile and Resistance, Notre Dame University and Religion, Conflict, and Peace Initiative at Harvard University.
Administrative assistance: networks@crassh.cam.ac.uk

Literature as Archive II: Reading and Conversation with Elias Khoury and Susan Abulhawa

An Archaeology of Marronage: Mapping Slave Runaway Sites in Hispaniola, 1521-1822

ONLINE The Book of Disappearance

ONLINE Oral Histories of the Disappeared

ONLINE Archives of a Quarantine

Translation and Colonisation in Israel/Palestine