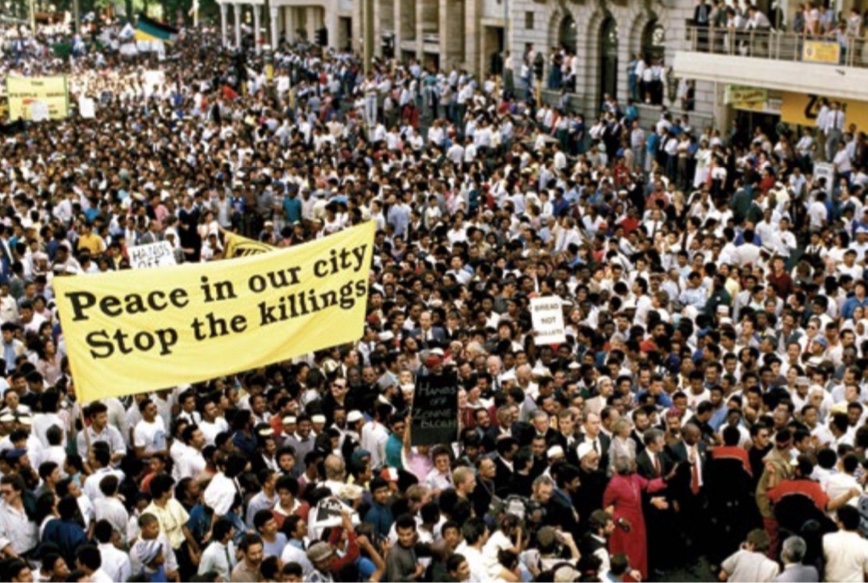 South African journalist John Allen had a unique lifelong professional and personal relationship with ’the Arch’, and was intimately involved in some of the most dramatic events during the fall of apartheid in the 1980s, before being Communications Director for the Truth and Reconciliation Commission and Managing Editor of Africa’s largest news website, AllAfrica.com. Allen will discuss the aspects of Tutu’s character, attitudes and values – especially his early grasp of image-management politics – which helped him play such an effective role in the fall of apartheid in the 1980s. Tutu’s story asks what it means to publicly perform, and how media attention works as a political force – topical questions today.
After excerpts of raw documentary footage from the 1980s, we will explore the thinking behind John’s authorised biography of Tutu, Rabble-Rouser for Peace (2006), and behind the screenplay based on the book, discussing medium, the media, and politics with the BBC’s Louise Blythe, who runs the training programmes which keep the BBC up to date with the skills to tell stories in the digital era – from social media to news to commissioners to platform-designers. Chaired by Clare Foster.
Says Allen: 'Tutu understood the power of the press as an agent of change. He was always conscious of playing a part, whether in a pulpit, in vestments, in a Mao cap, or wearing a rich Republican green jersey in Ulster. He was “a stageprop”, as he put it, helping draw attention to friends' causes’. At the same time, he understood race and identity as a public matter in which all of us are always participating, even in our most personal choices and private moments.

CRASSH is not responsible for the content of external websites

Open to all. No registration required.
Part of the Cambridge Interdisciplinary Performance Network (CIPN) Seminar series.