A public lecture with Ilya Yablokov (University of Leeds)

This event is open to all and will be followed by a wine reception. No registration required.

This is part of a series of public talks from the Leverhulme-funded project Conspiracy and Democracy. More information at http://www.conspiracyanddemocracy.org/. 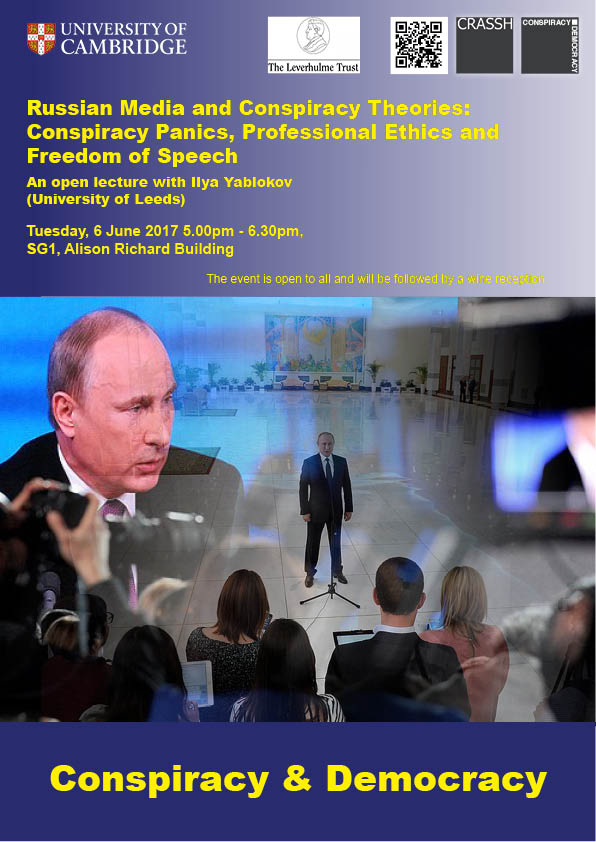 Whilst nowadays conspiracy theories are mainstreaming all over the world – the victory of Donald Trump and Brexit are the cases in point – contemporary Russia is a curious example. From the mid-2000s the Russian government have spent years and millions of rubles to spread the fears of Western conspiracy among the population and thus sustain Putin's popular support. Russian media played a key role in this process, constantly spreading falsified evidence of subversive activities of the Russian opposition with the alleged support of the West. Moreover, from the end of the 2000s the Kremlin reshaped the international television channel RT into a source of various conspiracy theories thus turning a media outlet into a sophisticated public diplomacy tool. The current attention of the US media and intelligence community to RT and Russia's alleged involvement into the US elections demonstrate that the efforts of Moscow could have reached the set goals. At the same time, the domestic media in Russia have evolved from the end of the 1980s from the beacons of democratization to the Kremlin's crucial element of the societal control.

Following the approach suggested by Mark Fenster (2008), I look at the phenomenon of conspiracy theories as a populist tool of power relations which helps relocate legitimacy and power among different political actors. I argue that in post-Soviet Russia conspiracy theories became a popular element of the media environment due to the lack of ethical principles among journalists. The failure of the journalistic community to develop a code of ethics and create a strong, united professional community caused a situation when the quality of the journalist output has been less important than the loyalty to the owner or the state. In this paper, I shall first explore how the Kremlin weaponized conspiracy theories abroad via the means of the television channel RT. Then I shall look at the evolution of the Russian media community in the 1991-2016 period, compare the popularity of conspiracy theories in the media in the US and in Russia and will demonstrate how Russian journalists became one of the main drivers of the popularity of conspiracy theories, hence, failing to sustain the democratic development of the post-Soviet Russia.

Dr. Ilya Yablokov is a Teaching Fellow in Russian at the University of Leeds (UK); he teaches a variety of modules on Russian history, politics and culture. He holds an MA degree with Distinction in Nationalism studies from Central European University, Hungary (2009) and received his PhD from the University of Manchester (UK) in 2014. His research interests include conspiracy theories, nation-building and politics in post-Soviet Russia, the history of post-Soviet journalism and international broadcasting. He has published in various peer-reviewed journals (Nationalities Papers, Politics, Democratizatsiya, Russian Politics and Slavic Review). He has recently co-edited a special issue of Russian Politics on post-Soviet Russian media elites. In 2015, he won the BASEES Prize for the best peer-reviewed article published by a post-graduate student. His book Fortress Russia: Conspiracy Theories in the Post-Soviet World (Cambridge: Polity Press) is due to be published in 2018.