A public lecture with Dr Sophia Rosenfeld (University of Pennsylvania)

This event is open to all and will be followed by a wine reception. No registration required.

This is part of a series of public talks from the Leverhulme-funded project Conspiracy and Democracy. More information at http://www.conspiracyanddemocracy.org/. 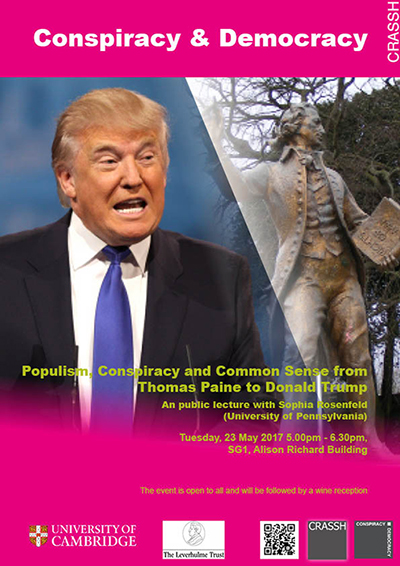 Populism is best understood as a style of politics rather than a specific doctrine. But ever since the eighteenth century, its appeal has depended upon a kind of built-in conspiracy theory: that the current crisis stems from the fact that the real people have been robbed (alternately by elites, by foreigners, or by some kind of minority force) of a power that they once naturally possessed, and the situation can only be rectified by a return to their unjustly neglected “common” sense. In the age of Paine, this theory helped spur the development of a democratic political order. Yet already by the time of the French Revolution—and to this day, as the current Trump regime in the US demonstrates—a common sense populism threatens to undermine democracy at every turn in ways that this talk will spell out.

Sophia Rosenfeld is Walter H. Annenberg Professor of History at the University of Pennsylvania, where she teaches European intellectual and cultural history with a special emphasis on the Enlightenment, the trans-Atlantic Age of Revolutions, and the legacy of the eighteenth century for modern democracy.  She is the author of A Revolution in Language: The Problem of Signs in Late Eighteenth-Century France (Stanford, 2001) and also of Common Sense: A Political History (Harvard, 2011), which won the Mark Lynton History Prize and the Society for the History of the Early American Republic Book Prize and has been translated into French and Korean.  Her articles and essays have appeared in leading scholarly journals, including the American Historical Review, the Journal of Modern History, French Historical Studies, and the William and Mary Quarterly, as well as The New York Times, The Washington Post, Dissent, and The Nation.

Currently she co-edits the journal Modern Intellectual History and is co-editing (with Peter Struck, Penn Classics Department) a six-volume book series for Bloomsbury on the cultural history of ideas since antiquity. She is also writing a book, to be published by Princeton University Press, on how the idea and practice of choice-making became so central to modern conceptions of freedom.  Among her other ongoing interests are the history of epistemology and the senses; the history of free speech, dissent, and censorship; the history of dance; the history of political language; contemporary political theory; and experimental historical methods.

Rosenfeld received her B.A. from Princeton University and her Ph.D. from Harvard University. She has held fellowships from the Guggenheim Foundation, the School of Social Science at the Institute for Advanced Studies, the Mellon Foundation, the Remarque Institute at NYU, and the American Council of Learned Societies, as well as visiting professorships at the University of Virginia School of Law and the École des Hautes Études en Sciences Sociales. Prior to arriving at Penn in January 2017, she taught in the History Departments at the University of Virginia and, most recently, Yale University.