What do we mean when we say ‘we can’t see the wood for the trees’? The expression marks the fact there are always different levels of potential awareness when we look at what is in front of us. For Polanyi, who coined the expression ‘tacit knowing’ or ‘tacit knowledge’ in his seminal work The Tacit Dimension (1966), these multiple levels are a form of tacit knowing, a comprehensive entity. Knowledge for Polanyi is above all personal: an embodied act, and always mediated.

But what happens when people share tacit knowledge – knowledge of the same comprehensive entity? This is where a concept of performance is helpful – it captures the interaction of self and community, how each shapes the other. The arts in general, I argue, have always had a key role to play in questioning and reframing our understandings by directing attention to the tacit assumptions, norms, and expectations embedded in all cultural processes.

It is easy to see how the interaction between who we are, and the environment that surrounds us, becomes a key issue in a digital environment. Engagement with and through social media networks and mobile apps are re-shaping the notion of community and family and affecting wellbeing, as well as the cultures of the workplace and institutions. The exponential rise of big data flows in networked communications causes vast gaps in translation, confusion about what is true and false, and mistrust of ‘experts’. In the shadows of machine-thinking, we are unable to engage with difference. This challenges us to come up with technological futures rooted in us as interdependent persons, not as numbers, parts, sensory mechanisms, genes, or individual bodies.

The Re- Network’s recent 3-day Tacit Engagement in the Digital Age conference at CRASSH and the Cambridge Music Faculty challenged a supposed neutrality associated with technology, evidenced in the idea that human ‘intelligence’ can, in the absence of ‘person’, be artificially re-presented, re-constructed and re-produced through computation (AI). The conference explored different ways in which the interplay of the arts and sciences is questioning what an ‘intelligence’ that is ‘artificial’ might be, resituating the purpose and possibilities of the technologies we are creating as above all human phenomena.

These are issues that come up more and more with the growing virtual worlds we inhabit with others, with constant movement between physical and online presence, and with the sociology of scientific knowledge – particularly the limits of AI, and the design of ‘collective intelligence’ Listen to NESTA CEO Geoff Mulgan’s talk that kicked of the conference: How can Collective Intelligence Orchestrate Tacit Knowledge of Different Kinds?

Husserl, in 1931, developed the concept of intersubjectivity. But this applies most usefully to systems that are more ‘friendly’, more ‘understanding’, more 'empathetic', more 'human-centred': it is a concept based on the projection of the self, about placing ourselves in the other’s shoes and understanding how we would react were we him/her/them. Hall, in 1976, showed how concepts of sympathy and empathy tend to be rooted in this identity transference, assuming or necessitating a sameness of culture. In disembodied communication, sympathy and empathy are not about engaging with difference. They do not see, and therefore cannot question, the algorithm. When we move with our bodies, or use our voices, we can empathise with difference. This is distinct from using language on its own.

The poster for the conference ‘Tacit Engagement in the Digital Age’ (below) based on designer Michael Byrne’s research on ageing dancers, reminds us that a key way knowledge is mediated, is via the body. When an elderly prima ballerina demonstrates a step to a younger prima ballerina, the older woman’s movements appear more subtly communicative than the younger dancer’s, which although as skilful in technique, are not as personally inhabited. 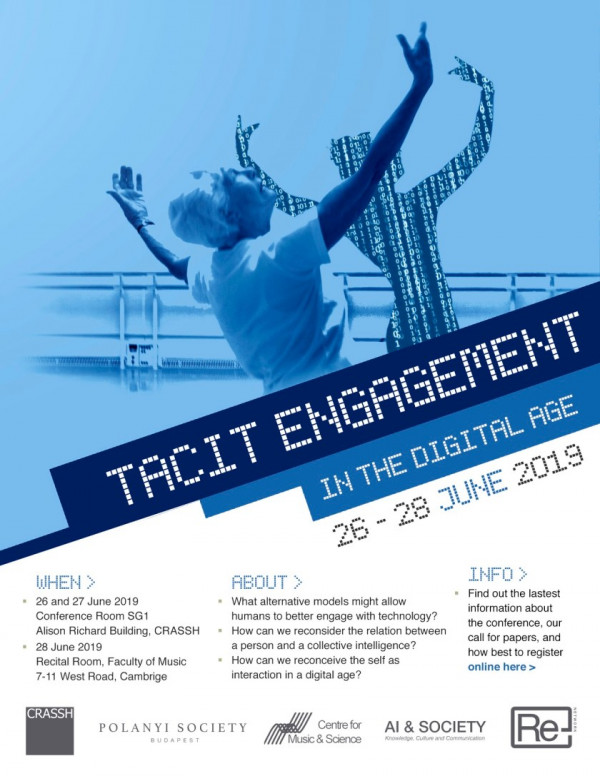 As Carl Rogers famously quotes Polanyi: “There are limits for making something more explicit than it has been…. The problem arises in analyzing and trying to put together explicitly a thing which has been broken down into parts. The tragic thing about it is, analyzing and putting together is the most powerful way of getting truth. I mean our whole biology almost exists in analyzing and putting things together. So that we are in difficulty because nobody can tell us whether what we have spilt up can be put together again or not; and if we build up a culture recklessly on the assumption that only things are valid which can be broken into parts – and that putting together will take care of itself – we may be quite mistaken, and all kinds of things may follow.”

What do we mean when we say ‘we can’t see the wood for the trees’?