This post was originally published on the ‘Re-’ Network blog.

The ‘Re-’ Network asks what repetition does. Why do we repeat, revive, re-enact, restage, reframe, remember, represent, and refer – to whom, when, where and why – and why is this a topical question in a digital era?

From history, heritage, tradition, canons, icons, revivals, re-enactments and archives to celebrity, brand and social media, the aim of the Network is to help equip the public with a more fluent grasp of how cultural repetition offers an identity, frames a particular worldview, implies a consensus and performs a persuasive past.

Our discussions raise issues such as the manufacture of consensus, the power of label, category, and association, and how different technologies have different social and political affordances. ‘Re-’ asks what starts, and changes, a prevailing narrative, and for whom. Public perceptions persist to a remarkable degree across huge changes in populations, media and infrastructure – why? Part of the answer lies in the fact that familiarity itself is its own value. Everyone wants the collectively recognisable: it is the means by which we can publicly say something. But in the process other often unnoticed dynamics work to subtly establish, legitimise and persuade. The kinds of questions ‘Re-’ asks are, for example, how we should approach artworks (e.g. Shakespeare, Mozart) that exist in reciprocity with their own notoriety. Or the relationship between material heritage and immaterial heritage – not as easily separated as it might first appear. Should archives be seen as engaging primarily with the past, or the future? How is a ‘tradition’ similar to and different from a ‘fashion’ – and how might both offer insights about the dynamics involved when something goes viral?

Whatever heading or label we are working under – history, tradition, adaptation, allusion, revival, reproduction, heritage, cultural memory – these and other iterative and referential practices are all engagements with the collectively recognisable. As such, they have three things in common:

Second, reification: of both individual item and the aggregate of which it is seen as a part. Repetition gives things weight: lends them their existence. Copying makes an ‘original’, as many have said. Traditions make ‘firsts’ in the same way. A focus on firsts and originals is characteristic of a particularly Western cultural history that likes to locate, define, classify and order: to claim a ‘source’ is an evaluative and organising gesture. But the role played by the passage of time in these processes turns out to be key: an idea, practice or position becomes normal or dominant by simply appearing to have survived, or to have received sustained attention, over time. This observation applies more widely. Contesting something – saying a statement is false, for example – can make it stronger, or sustain it, by making it more recognisable. But equally, not contesting something at a time when definitions are in flux can allow it to gradually become legitimised. Seen through this lens, inaction at a key moment of cusp can be highly consequential. ‘Re-’s subject matter, then, is not traditions, but the traditional. Not the ‘thing’ repeated, but the practice of repeating it. On reflection, the two can’t easily be separated.

Third, collectivity. Like applause in an auditorium, a tradition, narrative or label can be started by a single agent or event, but crucially depends on the complicity of others to exist. And a ‘first’ is often declared retroactively (not always: many predict or hope for ‘firsts’, and have repetition or an afterlife precisely in mind). In fact the starting point of a collusive tradition, story or trend can be located by anyone, anywhere, at any time: what is key is to keep it being repeated, being shared, being spread through collective capacities to recognise in the present: in other words, traditions only exist as performed. It is no accident that the ‘Re-’ Network arose in part from exploring the interdisciplinary concept of performance at CRASSH over the past five years [1]. Discussions in ‘Re-’ seminars always come around to who or what controls the frame or stage.

Everything can be seen as ‘performance’ in some way, as has often been said. In the same way, everything can be seen as involving ‘repetition’: it is embedded in all human practices inevitably, as well as deliberately. What gives the ‘Re-’ Network its particular focus is the question of what else is being performed other than the thing ostensibly being repeated – values such as community, identity, continuity, status, participation, nation etc. ‘Re-’ asks the basic question ‘who is it for?’ – i.e. what constituencies or audiences are implied by any particular statement, work of art, language, or other form of (re)address. These implied audiences are sometimes obviously targeted (‘not for me’), and sometimes precisely mixed, where an effort is made to capture multiple, often incongruous groups, in a single act of communication. In famously repeated works of consensual value, such as Shakespeare or Greek drama, the ability to appeal to many different levels of assumed knowledge or degrees of familiarity is often the point. Repetition connects, groups, assembles, gathers.

‘Re-’ is about constantly going back to the question of what this or that instance of repetition is doing – or did in its time, or might do in the future. The ‘same’ thing will not only mean different things to different people, but will mean different things at different times. So however accurately reproduced, no work can remain exactly the same, except in so far as it performs this paradox. The thing to ask, then, is what capacities to recognise a repetition is addressing, and whether it aims to reinforce existing expectations, challenge them – or both. And whose interests might be served by promoting belief in one, rather than another, claim to importance, priority, or ‘truth’.

As the short non-word ‘Re-’ suggests, these kinds of questions don’t necessarily belong to any one existing discipline or vocabulary. And they arise in the context of rapid change that increasingly calls for a need to move away from seeing culture as encounters between individual objects and subjects, towards seeing the sets of relations, tensions, and reciprocities that cultural practices put into play. ‘Re-’ prompts us to notice what is not being repeated, as well as what is; how attention is being distracted, as well as directed; how to include can also be to exclude, and vice versa. It advocates a systems-based approach to ‘truth’ over decontextualised analyses of objective instances; one that privileges multiple perspectives, networks of associations, and preponderances of evidence. Living under the aegis of the ‘technology of persuasion’ as the Facebook executive board recently described their field of business [2] we all need to think twice about who repeats what and why. We need to become experts not only about objects and events, but what the public repetition of objects and events makes possible.

[1] The Cambridge Interdisciplinary Performance Network and its associated seminars and conferences, e.g. the ‘Re-performance’ roundtable discussion. Also important was a 2017 conference at UCL’s Institute for Advanced Studies. 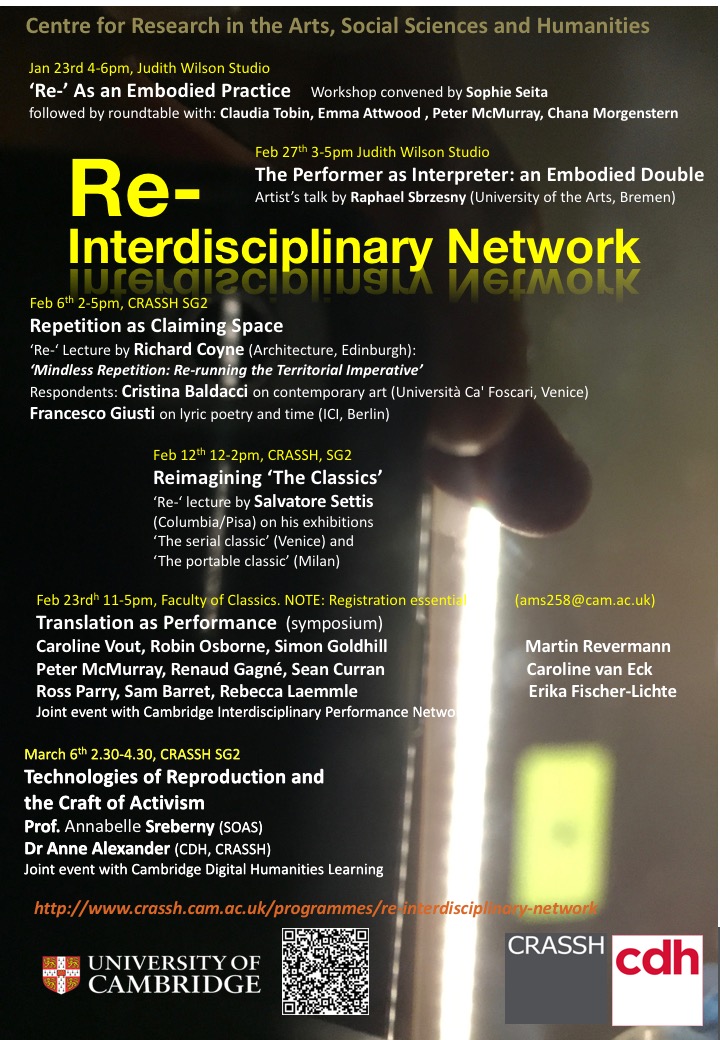 • View the Network's programme of events.
• Video: Adam Lowe and Simon Schaffer – Replicas in the Histories of Art and Science

Like applause in an auditorium, a tradition or narrative can be started by a single agent or event, but crucially depends on the complicity of others to exist.