The Expertise Under Pressure project hosted its first workshop on 27 September 2019 at the Centre for Research in the Arts, Social Sciences and Humanities (CRASSH). The project is part of the Centre for the Humanities and Social Change, Cambridge, funded by the Humanities and Social Change International Foundation. The overarching goal of Expertise Under Pressure is to establish a broad framework for understanding what makes expertise authoritative, when experts overreach, and what realistic demands communities should place on experts.

The talks and discussions of this first workshop focused specifically on a charge frequently levelled against experts who study human culture and social behaviour, i.e. that their explanations can provide justifications or excuses for ill-intentioned people, and that decisionmakers making choices on the basis of their advice might neglect to punish and react effectively to harmful behaviours.

A good way to capture the theme of the workshop is a saying attributed to Germaine de Stael: “tout comprendre, c’est tout pardonner”, “to understand all is to forgive all”. Social scientists perhaps do not intend to understand all that there is, but they generally like the idea of increasing our understanding of the social world. By and large, historians, sociologists, political scientists and anthropologists, tend to show that the people they study do certain things not just because they want to do those things, but also because they are driven by various kinds of factors. And the more knowledge we have of these factors, the more choice, responsibility, and agency seem to fade away. This begs the question: does understanding come at the price of undermining our capacity to judge, blame, and punish? And should we conceive this as a price, as something that we should be worried about, or as something that we should welcome? And how should scientific disciplines, professional associations, and individual researchers deal with this issue in their daily practice and especially in their interventions in public debates and in policymaking contexts? Indeed, these issues essentially relate to the question of how social knowledge is produced and how it circulates outside academia, and notably how it is appropriated and misappropriated by different groups in the endless disputes that divide society and in which attributions of credit and blame are widespread.

The one-day event brought together researchers from various academic disciplines, looking at the exculpatory potential of social research. Here is what they came up with. 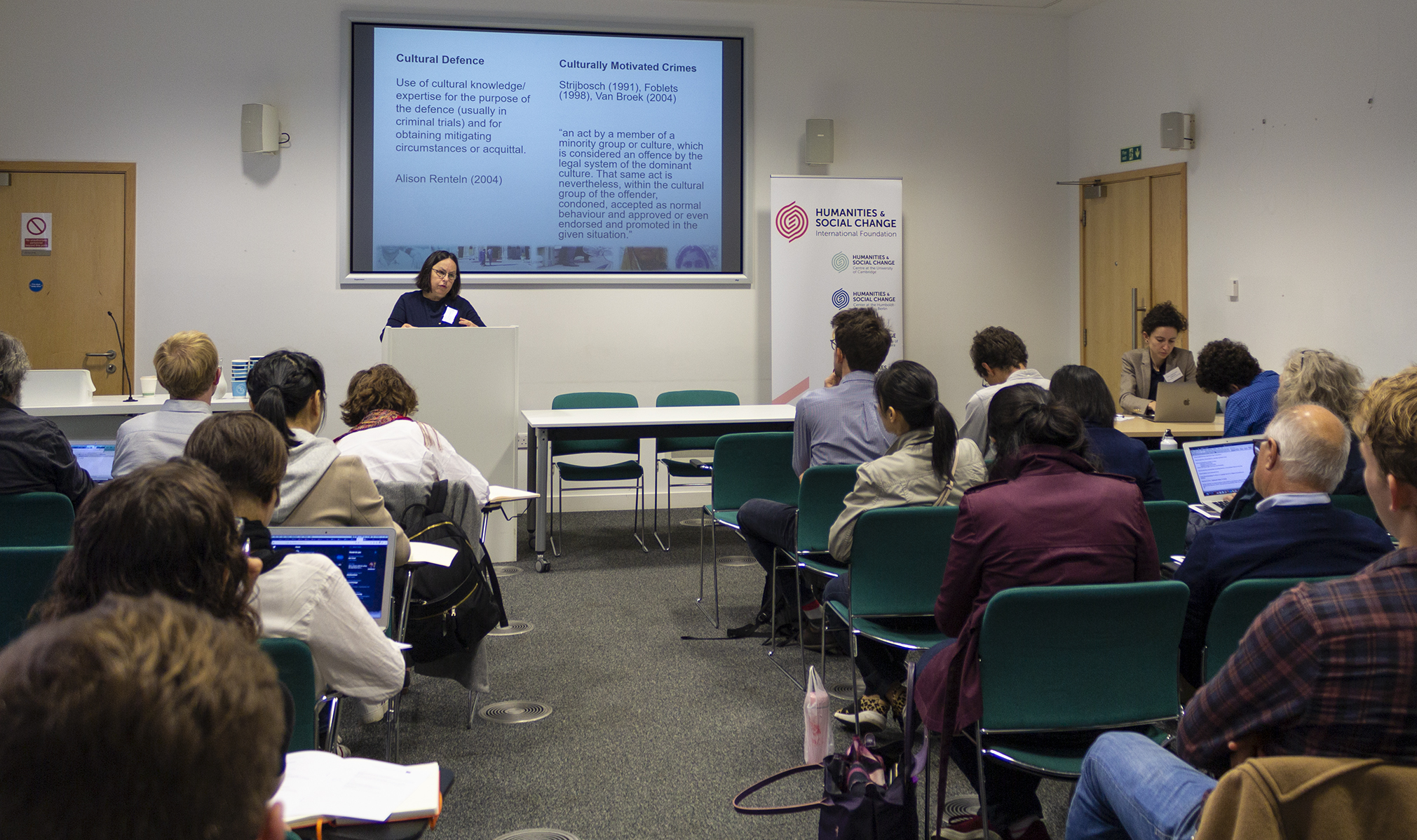 Professor Livia Holden (University of Oxford) was the first speaker of the day. With a background in anthropology and socio-legal studies, Holden leads a European Research Council project titled Cultural Expertise in Europe: What is it useful for? The project looks at the role of anthropologists and other cultural experts in advising judges in court cases and policymakers in fields such as immigration law. In her talk, ‘Cultural Expertise and the Fear of Absolution’, she analysed the concept of cultural expertise and described the specific challenges cultural experts face, especially where anthropology enjoys little credit. Drawing on several examples, including her own experience as an expert witness in family law cases, she argued that experts oscillate between the fear of absolution, i.e. concerns of excusing harmful acts (such as genital mutilation) on the grounds that they are rooted in cultural traditions, and the fear of condemnation, i.e. concerns of being complicit with colonial rule and repressive criminal justice policies. 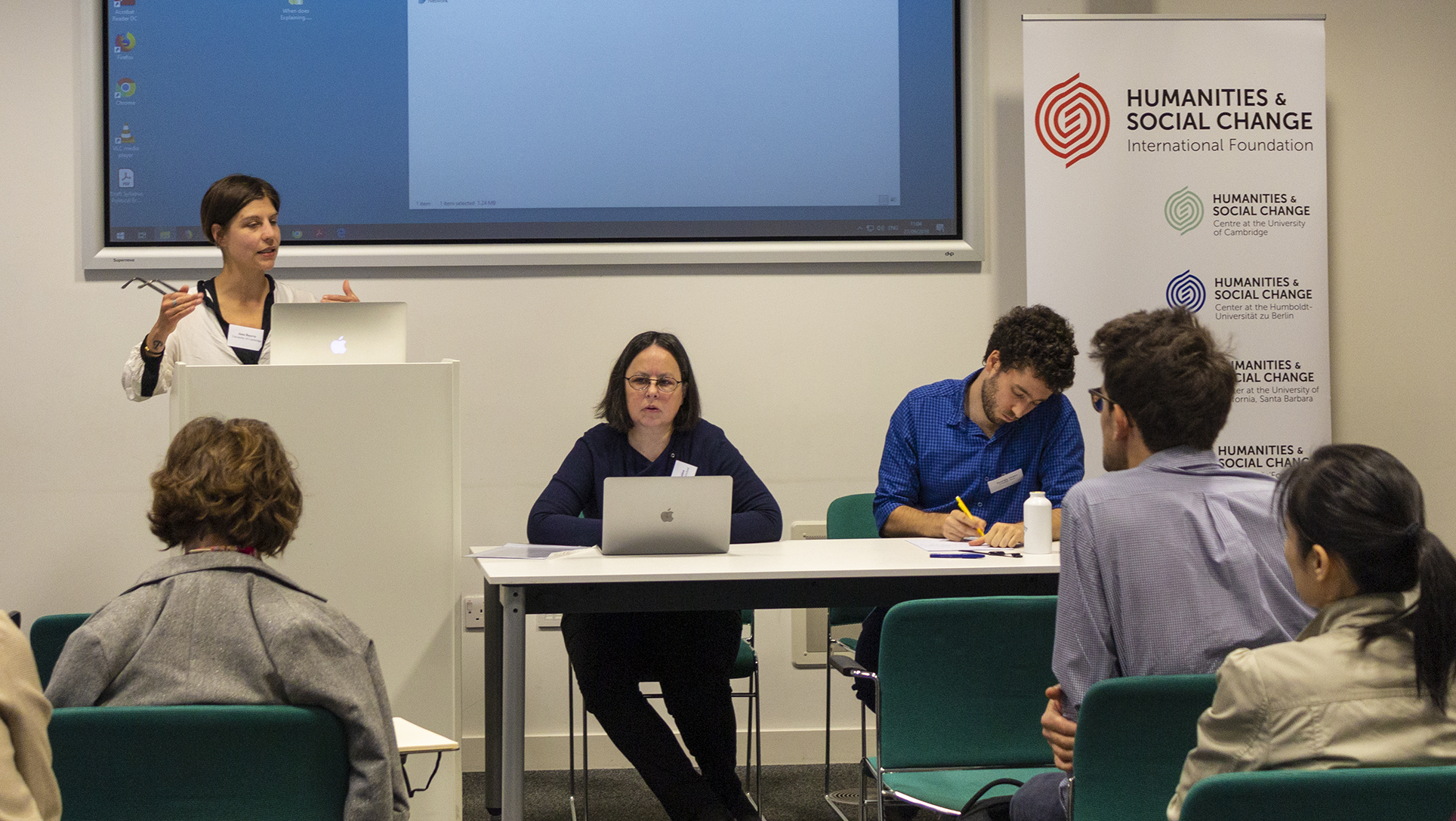 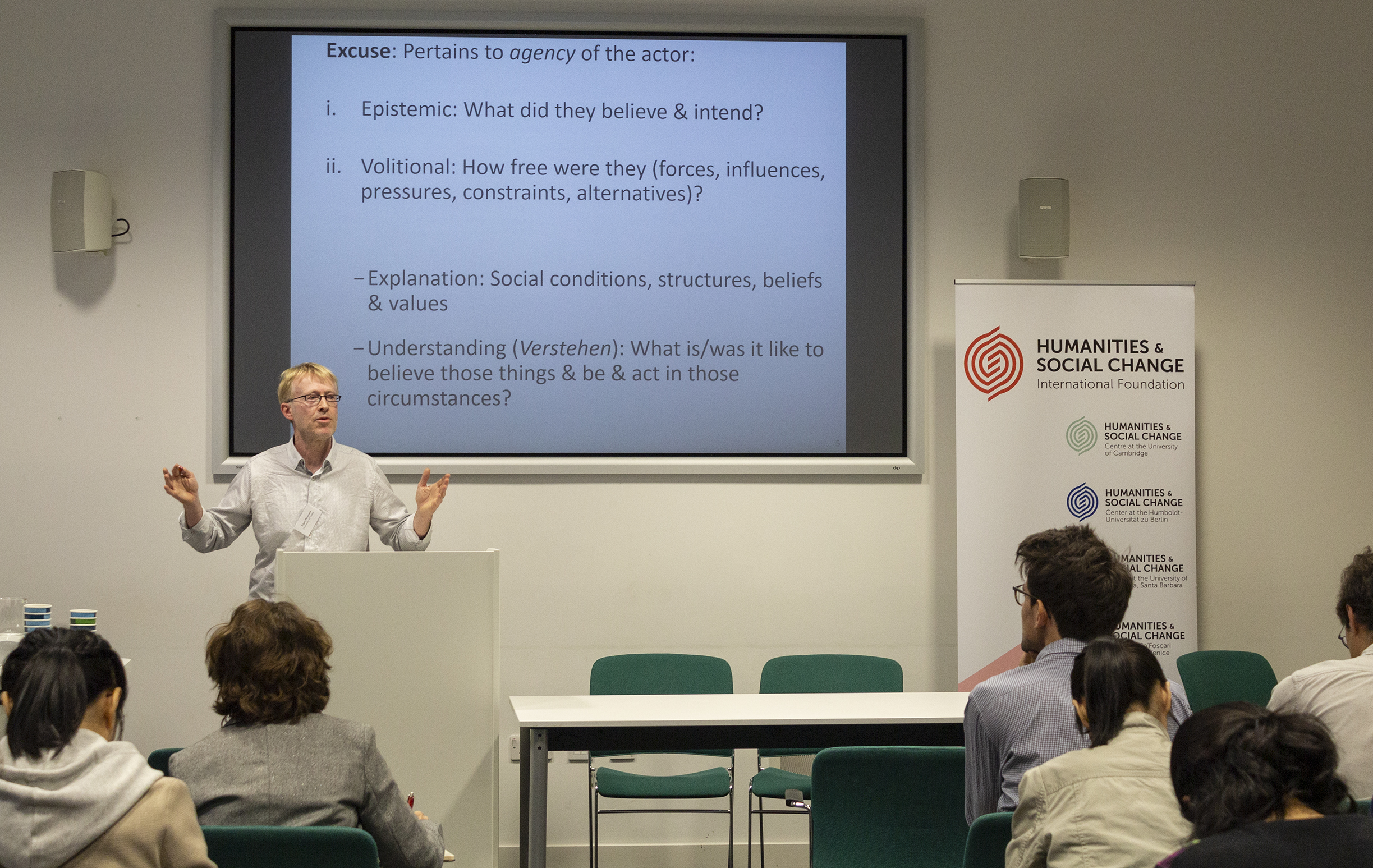 Dr Nigel Pleasants (University of Exeter) gave the next talk. Pleasants is a philosopher of social science who has written extensively on how sociological and historical knowledge influences our moral judgements. In his recent publications, he focused on various controversies related to historical explanations of the Holocaust. His talk, ‘Social Scientific Explanation and the Fact-Value Distinction’, explored and clarified the relation between excuse and justification. Excuses concern the responsibility of an actor in performing a certain action, while justifications refer to the moral status of an action (i.e. whether it is right or wrong) regardless of the responsibility of the actor that performs it. Drawing on scholarship on the Holocaust, he argued that while explanatory accounts from the social sciences are highly relevant to determine whether a certain act can be excused, the same cannot be said for whether a certain act is justified or not. 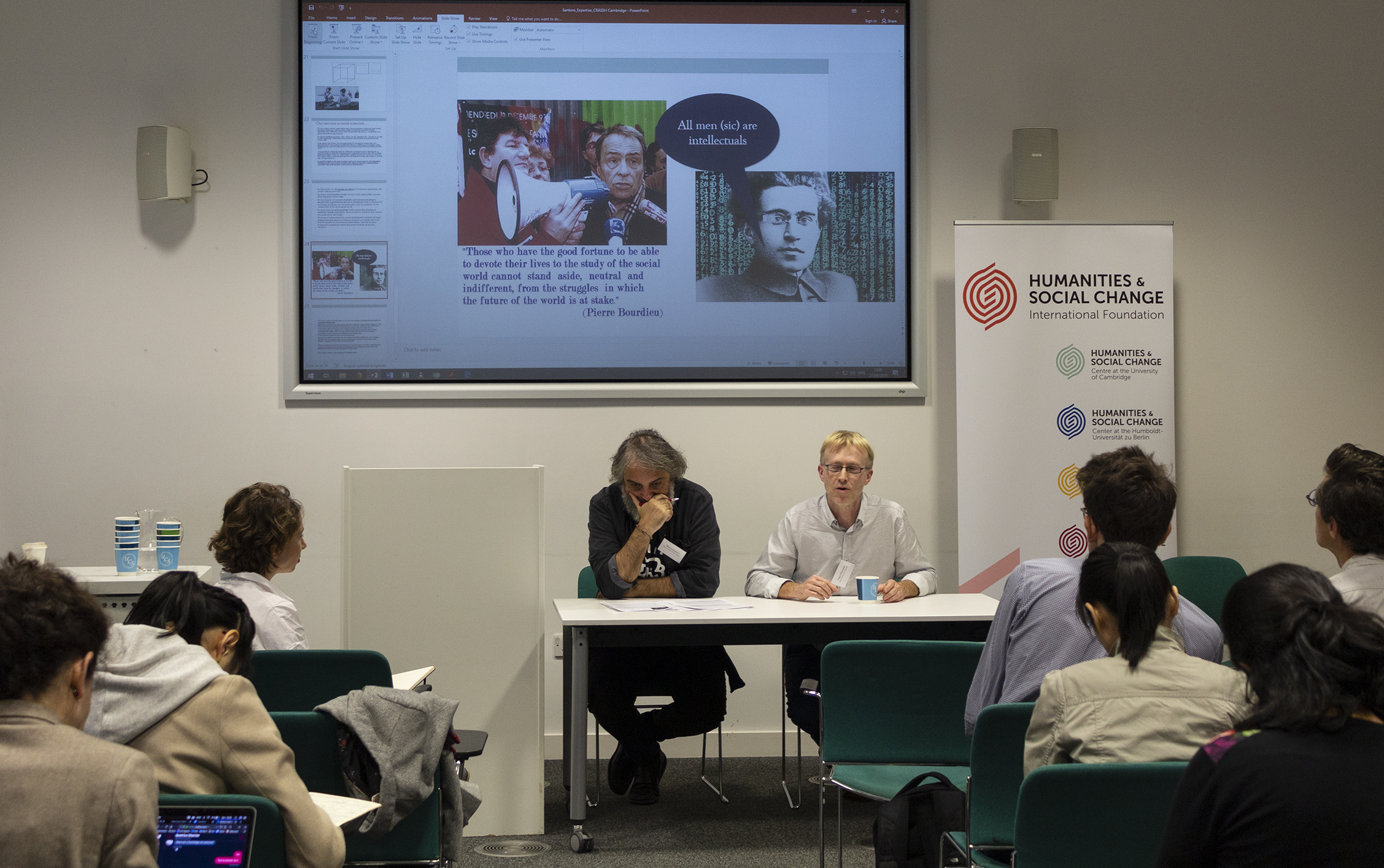 The morning session ended with a talk by Professor Marco Santoro (Università di Bologna): ‘Whose Sides (of the Field) Could We Be On? Situatedness, Perspectivism, and Credibility in Social Research’. Santoro is a sociologist who has written on such diverse topics as the notarial profession, popular music, the international circulation of social scientific ideas and the Sicilian mafia. His starting point was a personal experience in which his interpretation of the mafia was harshly criticised by a colleague. In his writings on the topic, he had argued that the mafia can be interpreted as a form of political organisation, a non-state political institution enjoying a certain legitimacy and providing protection and services to its constituency, in a region where poverty runs high and that many see as having been left behind by the Italian state.

Opening the afternoon session, Dr Federico Brandmayr (University of Cambridge) reconstructed the debate on ‘sociological excuses’ that took place in France after the country was struck by several deadly terrorist attacks in 2015 and 2016. In his talk, ‘The Political Epistemology of Explanation in Contemporary French Social Thought’, he showed that the very expression of sociological excuse has clear intellectual and political origins, rooted in US right-wing libertarianism, and argued that it is mainly used in France in relation to accounts of the urban lower class that emphasise poverty, unemployment and stigmatisation. Sociology as a discipline was at the centre of much controversy after the 2015 terrorist attacks, and sociologists reacted in three main ways: some denied the allegations, others reappropriated the derogatory label of excuse by giving it a positive meaning, while others accepted criticism and called for a reformation of sociology. Accordingly, Dr Brandmayr argued that French sociology should not be considered as a monolithic block that experiences attacks from political sectors, but rather as a heterogeneous complex of different epistemic communities. 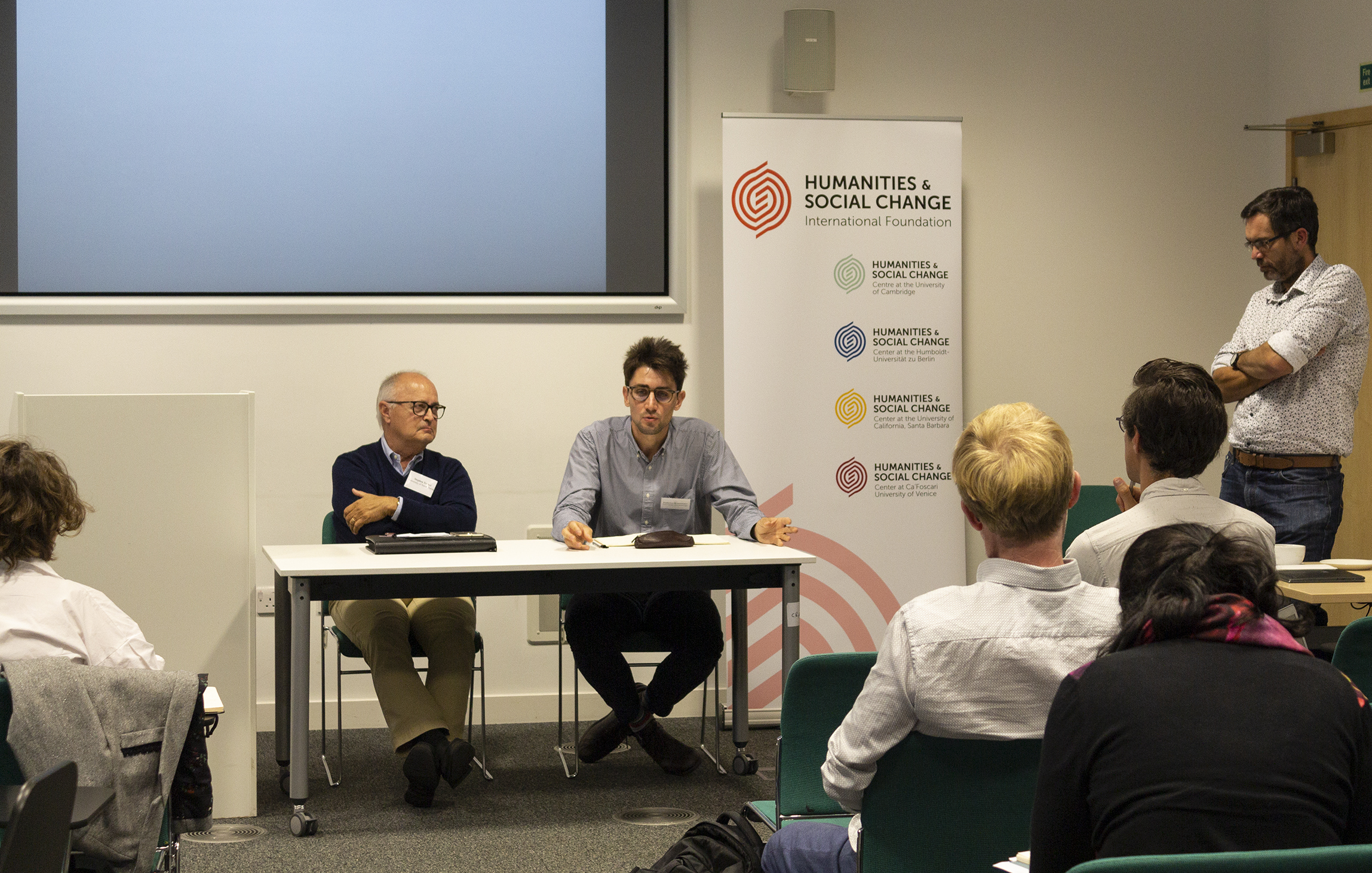 In a similar historical vein, Professor Stephen Turner (University of South Florida) gave a talk titled ‘Explaining Away Crime: The Race Narrative in American Sociology’. A renowned historian and philosopher of social science, he reconstructed the history of how social scientists have dealt with the fact that crime rates for Blacks in the US have always been higher than for other ethnic groups. Generally speaking, social scientists wanted to avoid racist accounts of this gap (like those based on a form of genetic predisposition of black people to commit crimes), but they also showed dissatisfaction with accounts that explained the gap by simply pointing to social factors such as poverty and discrimination. This is because of certain theoretical inconsistencies (such as the fact that black crime mainly targets black people, while one would assume that discrimination should cause Blacks to act violently against Whites), but also because it was seen as an excuse pointing to a deficiency in the agent and implying a form of inferiority. Spanning more than a century, Turner’s historical reconstruction identified three basic strategies US social scientists adopted to overcome this dilemma and delineated their ethical implications.

Finally, Gabriel Abend (Universität Luzern) took a more philosophical approach in a talk titled ‘Decisions, “Decisions”, and Moral Evaluation’. His talk built on a theoretical framework that he has recently developed in several publications, and which provides the foundation for the study of decisionism, i.e. the fact that people use decision (or choice) concepts and define certain things as decisions. Decisionism has clear moral and practical implications, as people are generally held accountable and subject to moral judgment when their acts are interpreted as decisions. Abend provided a striking list of examples from scientific journals in which the concept of decision was used to describe such unrelated things as bees’ foraging activities, saccadic eye movements and plant flowering. While these instances of decisionism offer plenty of material for the empirical sociologist, he raised concerns about the risk of conceptual stretching and advocated a responsible conceptual practice.

The workshop was a truly interdisciplinary inquiry, in the spirit of CRASSH. All interventions, whether their approach was philosophical, sociological, historical, or legal converged toward increasing our knowledge of the relationship between explaining and understanding on the one hand, and excusing and justifying on the other. Thanks to the lively and thorough responses given by an impressive battery of discussants (Dr Anna Alexandrova, Dr Jana Bacevic, Dr Cléo Chassonnery-Zaïgouche and Dr Stephen John), the talks were followed by fruitful exchanges. A special issue with the papers given in the workshop is in preparation and will be submitted soon to a prominent interdisciplinary journal.