On 26 – 28 June 2017, the Digital Humanities Network (University of Cambridge) and Cultures of the Digital Economy Institute (Anglia Ruskin University) will host a diverse group of researchers for a workshop exploring the relevance of John Berger’s seminal documentary series Ways of Seeing for the digital age. Ways of Machine Seeing 2017 follows on from an exploratory workshop in summer 2016, convened by the Digital Humanities Network in collaboration with Professor Alan Blackwell (Cambridge Computer Laboratory), Dr Geoff Cox (Aarhus University) and Leo Impett (EPFL). In this blog post, Leo Impett explores the themes analysed in the 2016 event.

The Ways of Machine Seeing 2016 workshop was based on a consideration of two classic texts: Ways of Seeing (Berger, 1972) and Vision (Marr, 1982). Berger’s text and documentary series was deeply influential in the history of art and its public understanding, partly in response to Kenneth Clarke’s earlier Civilisation. Marr’s book, on the other hand, lies at the heart of modern computational neuroscience and cognitive science; emphasising heavily how the whole brain can be understood through an analysis of the visual system.

Vision doesn’t consist of objective optical projections; it implies a gaze, a point of view, a way of seeing. This is the key insight of both texts; they allow us to use the image as a technical frame for the artistic, the social, the political and the biological. Given the visual-algorithmic revolutions of the few decades since these works were published, it seems pertinent to re-assess the changing ways of seeing in the face of evolving technologies, which work increasingly on a social-political-anthropological – not an industrial-economic – plane. Any consideration of machine seeing implies and requires a clearer and more precise understanding of human seeing; our project is necessarily biopolitical.

In this light, we convened as a group split in roughly equal proportions between technical specialists in machine and biomachine seeing, and humanists and art scholars. The workshop followed the Blackwell-Leach method for interdisciplinary research, developed with the Crucible research network; each participant started by giving an introduction to themselves and their work. Each participant suggested a number of topics to be addressed in detail in the afternoon; following a brief discussion, the suggested topics were voted on.

Images by machines for machines

We start from a consideration of the types of ‘seeing’ that search-engines do; as a mediator between an infinite online imagescape and a profitable algorithmic canvas, the search-engine acts as the algorithmic author of countless photoessays, comparable to Berger’s (or Warburg’s) own work. The technical and social implications of machine-learning and computer vision for the understanding (content-based) of images, replacing earlier caption-based searches, is of particular note; through machine and deep learning advances, we no longer take political responsibility for the curation of our biggest media. It was noted that this could play an emancipatory role – with the famous recent instance of the ‘three black teenagers’ Google image search highlighting a social, rather than algorithmic, problem.

The related task of image classification – one of the key tasks in computer and deep vision – gives a range of social considerations relating to classification systems, considered in by Bowker and Star in Sorting Things Out.

The effects of the search-engine on visual-algorithmic hegemony were also noted; in the simplest case, we see highly-ranked images more likely to be shared, at both a personal and institutional level. Again, machine-learning significantly complicates the social dynamics; we have machine-learning systems for aesthetic judgements, which reward images that are most similar to a labelled training set of ‘good’ images (noting that the training set is usually the opinion of amateur photographers). These can then be fed into search-engines and social networks, prioritising images most similar to those judged aesthetically-pleasing by the (socially, geographically, gender, …) restricted training group. An algorithmic way of seeing could thus emerge from the positive feedback of social networks, search-engines and mobile vision apps (which themselves change the image – Instagram, Snapchat, etc); informing the dominant visual hegemonies, learning from them, and therefore reinforcing them.

We contrasted the way of seeing with the notion of gaze, particularly in relation to authority and disembodiment. It was noted that smartphones, through the recent introduction of live-streaming, are used throughout the world to highlight political issues, from the treatment of Black people in the USA to trades-union rights in Egypt. Here, a large audience is not necessarily the goal; rather, the opening-up of the machine gaze fulfils an archival role. At the same time, our perception and understanding of world events can be formed by this multitude of gazes.

A key element of the machine gaze is distance. After public outcry over the loss of dignity caused by airport security scanners that allow the police to inspect the nude body, a temporary solution was to increase the physical (and social) distance between the viewer and the viewed; an interesting parallel to the social distance over which we experience the widely-shared videos of atrocities in Europe and the United States, state political abuses, coups and beheadings.

The state apparatus, and multinational technology companies, themselves have well-formed visual gazes; with cities surveilled by security cameras. Notions of algorithmic govermentality help us understand the ways in which state and corporate structures inform and exercise their power over data alone. At the same time, agitprop and information exchanges between powerful organisations (including states) can be compared to the biological dynamics of Gaze Signalling; with the exchange not only of images, but gazes themselves (eg. in the Ukraine conflict).

Following Agre, it was suggested that further work should be both technical and critical in nature; to inform both fields, instead of transferring concepts from one to the other. Participants, many of whom had not met before, were enthusiastic both for sustained further collaboration and collective funding proposals. By analogy to Berger’s project, it was suggested this work might be pedagogical in nature.

This year’s Ways of Machine Seeing event will take up threads of discussions started at the workshop last year, and develop them further in conversation with a wider group of presenters and participants, who will explore critical responses to computer-generated art and the use of drawing robots, cultural value and the networked image, and the political economy of the selfie, alongside the themes discussed in 2016. 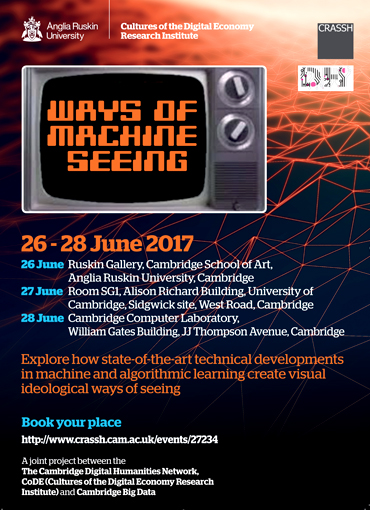 Vision doesn’t consist of objective optical projections; it implies a gaze, a point of view, a way of seeing.