Trish Lorenz is the winner of the 2021/2022 Nine Dots Prize. She has been a journalist for almost 20 years and divides her time between Berlin, Lisbon and Madrid. Formerly a columnist for The Independent and Monocle magazine’s Portugal correspondent, she continues to write about culture, business, politics and people for titles including The Financial Times, The Guardian, The Telegraph and The New York Times, among others. Trish has reported on stories across Africa, including Cape Verde, Senegal, Burkina Faso and South Africa. In 2021 she spent a term at CRASSH as part of her Nine Dots Prize fellowship.

Soro Soke will be available to buy, and for free and via Open Access, from 26 May 2022. 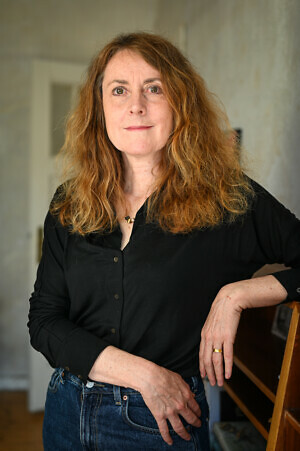 Q: Trish, What is your book Soro Soke about?

Focusing on Nigeria – one of the youngest countries in the world, where more than 42% of the population is under 14 years old – the book seeks to answer the question: what does it mean to be young in an otherwise ageing world? It features in-depth interviews and discussions with young urban Nigerians, exploring topics including the impact of urbanisation, the role of technology, the growth in youth activism and the vital role of social media.

Q: What drew you to the subject and what do you find particularly interesting about it?

This book came about in response to the 2020/2021 Nine Dots Prize question, which asked ‘What does it mean to be young in an ageing world?’.

I was a little frustrated that the question ignored the fact that although much of the global North is ageing, sub-Saharan Africa most definitely is not – all of the world’s 20 youngest countries are in the region. By 2050, Africa will be home to 1 billion young people, almost half of the world’s youth. I believe that no question of what it means to be young in the 21st century can ignore this vast cohort, who will be the entrepreneurs, scientists, creatives and activists that will lead the world into the next century. And they are emerging from an Africa that is very different to the continent of most Western imaginations.

In particular, growing urbanisation and access to new technology are defining this generation. Enabled by the megacities in which they live and by access to technological advances – which together offer opportunities that were out of reach or simply did not exist for previous cohorts – a creative, entrepreneurial and self-assured generation is emerging; global in outlook but rooted in and proud of their Nigerian and African identity. The Yoruba expression Soro Soke, meaning ‘Speak Up’, has become a clarion call for young Nigerians seeking to make their voices heard, and the phrase is resonating across the African continent and around the world via social media. (When correctly spelled, sọ̀rọ̀ sókè includes accents and tone marks. But, as the words have been co-opted as a protest slogan, the usage has simplified and it is this colloquial version that is used throughout the book.) The term first became a generational battle cry in the #endSARS youth protests against police brutality but has grown into the calling card of an entire cohort as it speaks up to demand opportunities and recognition.*

Q: Around which themes did you decide to structure the book, and to what end?

The book is structured around three key themes that emerged in conversation with young Nigerians.

The first is the role that megacities, such as Lagos, play in influencing this cohort’s economic opportunities, lifestyles, life choices, values and culture. Lagos has a nominal per capita income more than double the Nigerian average, is home to a pan-African banking industry, and is a leader in the Fintech and crypto currency sectors. Cities like Lagos give young people access to jobs and entrepreneurial opportunities, create income and growth and by their density, enable a leap forward in the ability to innovate. They help cultivate an ‘everything is possible’ attitude.

Growing urbanisation is also impacting identity – for this generation being Nigerian and being African has new meaning. Living in big cities that offer a host of opportunities, enabled by their creativity and by the possibility of setting their own narratives, this generation is celebrating its identity and is using music, fashion, literature and film to inspire the rest of world.

Technology, which lies at the heart of this cohort’s transformation, is the second key theme. Technology is enabling this generation to unearth novel solutions to some of the continent’s more intractable problems. For young Nigerians, leveraging the Fourth Industrial Revolution is not about copying traditional approaches from the west but conceiving, creating and delivering entirely new, pan-African opportunities. Entrepreneurial at heart, this generation is focused on turning problems into business opportunities and does so with a sense of social justice.

Africa may be the world’s youngest continent, but its leaders are among the oldest, many are approaching 80 and have been in power for decades. The final third of the book talks with the young activists who are also using technology, in particular social media, to challenge for power.

Q: In your view, wherein lies the book’s main contribution to our understanding of young Nigerians?

I think the main contribution of this book is that it relies heavily on the voices of young Nigerians. Unlike many works on Africa, this book does not assume that an outsider can speak for the African experience. In each chapter, it is young Nigerians who set the agenda, discussing the issues that concern them. They speak about the reality of 21st century life on the continent, air their hopes and dreams, and share their frustrations and experiences. The result is an optimistic and energetic perspective that challenges assumptions widely held in the global North.

The Nigerian writer and novelist Chinua Achebe is an important figure in modern African literature. In an interview with Paris Review magazine in 1994, he said: “There is that great proverb – that until the lions have their own historians, the history of the hunt will always glorify the hunter. [Storytelling] is something we have to do, so that the story of the hunt will also reflect the agony, the travail, the bravery, even, of the lions.”

This book aims to try to do just that. It documents the lives, ambitions, challenges and concerns of a group of young Nigerians living in the cities of Lagos and Abuja. It is their voices you will hear throughout the book – their hopes, their fears, and their aspirations. By listening to these young Nigerians, by telling their stories, this book aims to reflect the dreams, the travails and the bravery of the young lions who will inherit the 21st century.

Q: What would readers be surprised to learn about in your book?

Sub-Saharan Africa is a very urbanised continent – almost half of sub-Saharan Africans live in cities and by 2050 that number is projected to reach 60 per cent. In 2020, the continent had 74 cities with a population of more than 1 million people, equivalent to the US and Europe combined and over the next three decades an additional 950million people will be absorbed by the region’s humming, thriving, bustling megacities. As the OECD notes, ‘this transition is profoundly transforming the social, economic and political geography of the continent’.

*An earlier version of this interview contained wording that suggested the author had invented the phrase ‘soro soke generation’. This was not her intention and the interview text has now been corrected. No such claim is made in the book. Soro Soke was chosen as the title due to its use as a rallying cry and call for change among young protestors in Nigeria – something which is made clear in the text of the book (you can download and read the book for free at cambridge.org).

I wish this book existed when I was writing Welcome to Lagos. Trish Lorenz has done an excellent job of collating the hopes, dreams and frustrations of the young people of Lagos. They’re savvy, ambitious and they won’t take no for an answer. Watch out world. The soro soke generation is coming.

Chibundu Onuzo, Author of 'Welcome to Lagos', 'Sankofa' and 'The Spider King's Daughter'