Adrian Currie is a Postdoctoral Researcher at the Centre for the Study of Existential Risk, where he’s looking at the relationship between the culture of science, and our capacity to understand, predict and mitigate low probability, high impact events. We asked Adrian five questions about his exciting new book, Rock, Bone & Ruin: An Optimist’s Guide to the Historical Sciences, which will be released in March 2018. 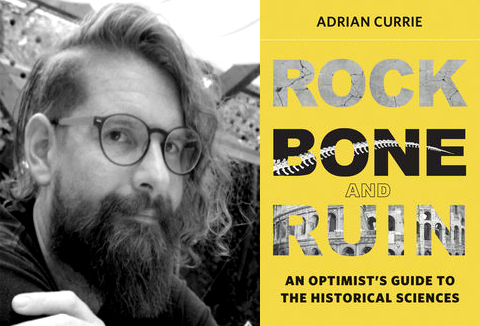 Adrian, what is it you do at CSER?

I’m a philosopher of science primarily concerned with the conditions and nature of knowledge-generation. That is, what are the methods and strategies scientists adopt to draw plausible hypotheses, create powerful tools for intervention, and build useful models? Existential Risks – that is, those which might end the human species or civilization – are tricky to understand, predict and mitigate. At CSER, I’m interested in whether current science is well set up for that task: And I’m worried that it isn’t. In particular, a science of existential risk would be both creative and speculative, both properties that scientists are not incentivised to be. As such, I’m interested in how we might change science’s governance and incentive structures to promote that creativity. Some of these ideas are summarized in my recent article in Aeon.

What is your book about? Why this particular topic?

It’s called Rock, Bone & Ruin: An Optimist’s Guide to the Historical Sciences and, in a nutshell, it says we should expect scientists to tell us a lot about prehistory. I examine sciences in the business of uncovering and understanding the deep past such as paleontology, geology and archaeology. People considering historical evidence often emphasize how impoverished it is: the past’s record is gappy and degraded, and we can’t generate new evidence with experiments. However, historical science is highly progressive: we know a lot more about the deep past than we did, say, twenty years ago. So, why so much success in the face of such impoverished evidence? My central message is that we’re just wrong that the evidence is so impoverished. Rather, historical scientists adopt surprising, creative strategies which allow them to reach deeply into the past. We should, then, be optimistic about our capacity to uncover many surprising and interesting features of prehistory.

Why this topic? Well, there’s something fascinating about both the deep past and the creativity of the scientists who study it. I think it really challenges our ideas of what good science looks like. Where philosophers trying to understand science often focus on the big events and great successes – the Copernican Revolution, the discovery of DNA, the Michelson-Morley experiment and so on – I’m interested in how science proceeds (and perhaps succeeds) when the going gets tough: when resources and evidence is thin and targets are obscure and obstinate. And historical scientists often face really challenging circumstances. There also isn’t all that much philosophical work on paleontology, geology and archaeology which is a real shame because there’s an enormous amount of juicy philosophical questions in there (check out the range of topics on Extinct, the philosophy of paleontology blog, if you don’t believe me!).

Who did you have in mind when you wrote the book? Would it make sense to someone outside your discipline?

I certainly hope it makes sense to non-philosophers! The book is firmly rooted in the philosophy of science – and tries to make some real progress on issues within that discipline – but I’d love for it to reach far beyond us philosophers. Most obviously, historical scientists can themselves potentially benefit from an outsider’s perspective on their methods. I’ve tried to write it so that both those unversed in philosophy, and those unversed in science, should be able to keep up. It would be wonderful if it managed to introduce scientists to philosophy and vice-versa. I should also emphasize that the book is often really fun. My arguments are drawn from fascinating case studies: explanations of the size of sauropod dinosaurs, the Neoproterozoic ‘snowball earth’ scenarios, ritual sacrifice in the Pre-Columbian Americas, and so on, and there’s more than a dash of whimsy in some of the writing. On that basis, I hope the book has a broad appeal and I’d be delighted if it found its way into the hands of at least a few people with a more casual, non-professional interest in paleontology, geology or archaeology (or philosophy for that matter!).

What do you find particularly exciting about your work?

This is a very exciting time to be a philosopher of science. The traditional boundaries of what kinds of questions fall within the field are breaking down. A few examples: the increasing acceptance that ‘non-epistemic’ values play a crucial role in how science works, increasing acceptance in the importance of understanding how science is practiced (as opposed to simply the outputs of scientific work), increasing acceptance of new tools and approaches, such as the use of simulations to model scientific communities. This has opened up a multitude of new questions and avenues of research. I think, when done right, this new pluralistic and integrative philosophy of science can be both incredibly valuable and, well, fun. I’m excited to learn just how to do it right.

Where might I find a copy of the book?

The book should be physically manifested around March 2018, but it is already up for pre-sale on Amazon for a rather amazingly reasonable price, if I don’t say so myself.

Scientists know about the past cos they’re creative and speculative!

[T]here’s something fascinating about both the deep past and the creativity of the scientists who study it. I think it really challenges our ideas of what good science looks like.