Hannah Bower and Rebekah King reflect on organising an in person conference at Churchill College enhanced by a sculpture tour and an evening concert.

Our conference, The Multimedia Craft of Wonder, took place at Churchill College on the 1st December 2021 as a hybrid event. It was followed by an evening concert (‘In the Shadow of Notre Dame’) produced by the Cambridge performance collective Marginalia, which reimagined some of the unique and experimental musical traditions emerging in twelfth-century Paris.

Both events were designed to explore the relationship between wonder, translation, and multimodality in medieval and early modern worlds and to ask whether wonder is represented – and incited – differently by different media. How did rope, steel, paint, narrative, music, metaphor, and theatre create and encode wonder differently in these eras? How did writers, artists, and actors translate wonder between media when commemorating a spectacular event, or putting instructions for such an event into practice and motion? How did media speak to—and define themselves from—one another?

During the conference, we explored these questions from many angles, thinking about topics as diverse as the staging of religious drama amongst early modern Spanish colonial architecture, the silent stage angels of early modern English drama, the luminosity of Hapsburg steel armour, and the use of knots in medieval Islamic dragon iconography. The conversations were wonderfully rich because participants included practitioners, artists, and scholars from many disciplines—including literary critics, art historians, historians of science, and music scholars. Our desire for a truly interdisciplinary discussion was one of the main reasons we applied to CRASSH for the conference funding: they are great at reaching and linking together different faculties and institutions in Cambridge and beyond.

Both of us learnt a lot from organising the conference. Below we each offer some reflections on that valuable process and what we will take away from it:

Hannah: I spend a lot of time researching on my own in libraries and archives and so, for me, one of the nicest things about organising a conference was the chance to work collaboratively with Rebekah, Nicki, and Marginalia. In our current time of uncertainty, we navigated many pandemic-related obstacles and last-minute changes, but being able to talk these problems through as a group—and with the benefit of CRASSH’s experience—made them a lot less stressful! Collaborating with Churchill College to create a smooth and meaningful hybrid format for the event also showed me that remote speakers and audiences can still feel part of the day, zooming up on the screen almost instantaneously to engage in conversation with speakers in the room. Remote attendees seemed at first to be slightly apprehensive about asking a question without being physically present but, once the ease of doing so became clear, more were keen to be involved. The hybrid format ended up giving our conference a much greater reach, attracting several speakers and attendees from the US as well as the UK and Europe. 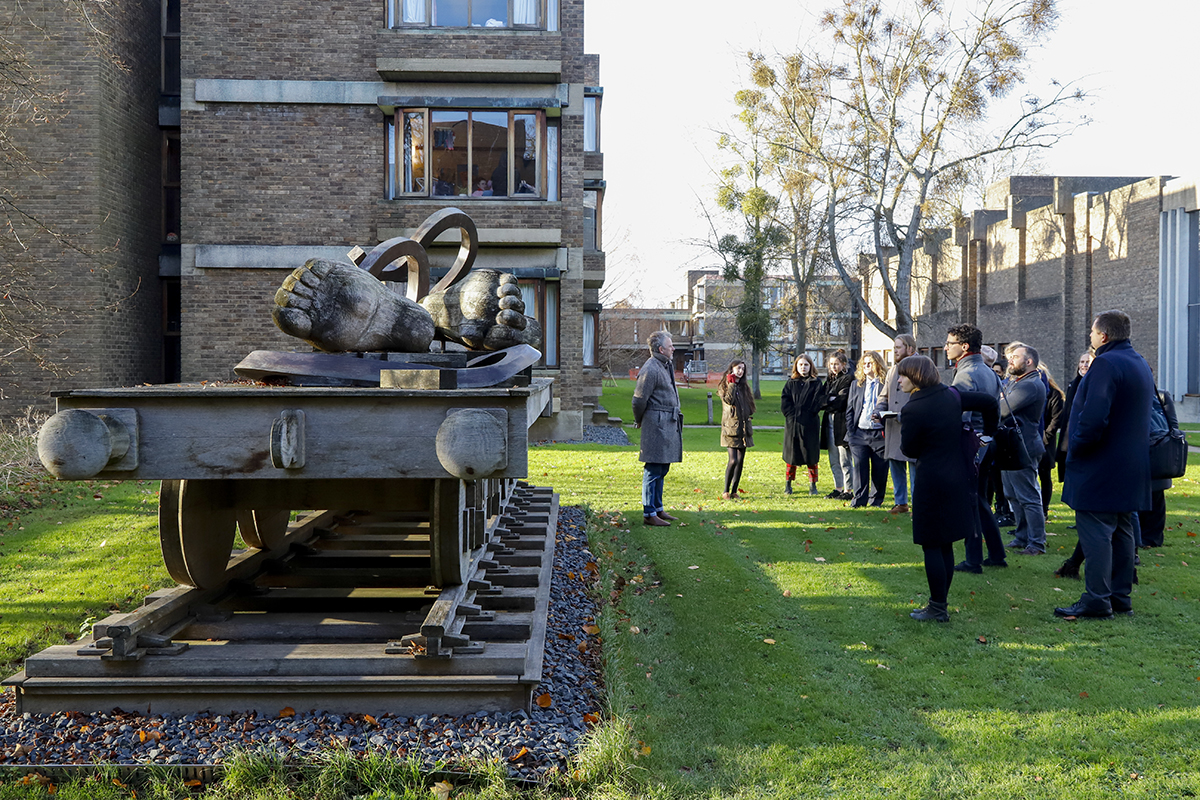 A highlight for me–and something I feel worked particularly well to structure the day–was the lunchtime sculpture tour around Churchill College’s grounds led by Churchill’s Curator of Works of Art, Barry Phipps. The sculpture tour not only gave us a modern perspective on our theme, but also allowed participants to stretch their legs and refresh their minds! I’d recommend to future convenors including some kind of activity like that in a programme; it is a great opportunity for everyone to reset.

Rebekah: It was something of a miracle that this conference was able to go ahead given the various unforeseeable disruptions, not least of all Covid, which loomed large as we entered the final stages of preparation. Nicki was a wonderfully reassuring influence; Hannah and I both felt supported by her and by CRASSH through all the ups and downs. The conference was an incredible experience, both CRASSH and the team at Churchill College helped ensure that everything ran smoothly on the day. I was able to enjoy myself and be fully present and focussed without worries lurking in the back of my mind. The sheer breadth of fascinating research which we were able to curate made for an energising day from which many ongoing friendships and collaborations will develop.

My top tip for organisers of conferences in the future would be to be mindful of inclement weather! There happened to be quite a severe cold spell and the room became pretty chilly. It’s always worth double-checking things like heating arrangements and all those simple practical things that are easy to forget but can make a big difference on the day.

A highlight for me was the lunchtime sculpture tour around Churchill College’s grounds led by Churchill’s Curator of Works of Art, Barry Phipps. The sculpture tour not only gave us a modern perspective on our theme, but also allowed participants to stretch their legs and refresh their minds! Both events were designed to explore the relationship between wonder, translation, and multimodality in medieval and early modern worlds.