On a recent trip to Ranthambore – a tiger reserve and wildlife sanctuary in the north Indian state of Rajasthan – I encountered a number of talking big cats. To be precise, these are large, lifelike, painted cut-outs of big cats that are friendlily asking one to meet them or have a party or, as in the third case, beseeching one to be given some land to walk on. Ranthambore, furthermore, is replete with tiger-paraphernalia or, as I prefer to term it, ‘tigeraphernalia’. You are welcomed into the tiger reserve through a large, pink fort-like entrance gate that carries an image of a languorously spread out majestic tiger. In our hotel there were images or stripes of tigers on our mugs, coasters, bed-sheets, towels, and furniture such as chairs with tiger claw feet and air coolers with golden/black stripes painted atop. Photographs and paintings of big cats were to be found absolutely everywhere. Big cat prints – tiger stripes, leopard spots, and pugmarks – were impressed upon all sorts of clothing and fabrics ranging from pajamas and T-shirts, to bedcovers and aprons. On leaving Ranthambore, I felt myself missing this deep immersion in a tiger-y world, even though we had spent but a few days there. A month later, as I dry my tiger coffee mug with my tiger-print tea towel in very distant Cambridge, I vividly recall the cattish material world of the tiger sanctuary. This capacity of tigeraphernalia to endure, not just materially as an everyday object of use, but also at a deeper, more affective level makes me mull its efficacy. Put differently, it’s worth asking if these talking big cats are capable of making themselves heard. 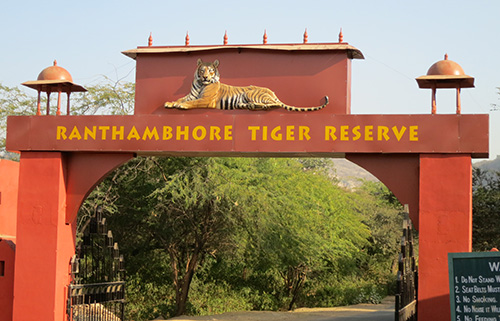 The endangerment of big cats, especially the tiger and the leopard, is a very real problem. There is a widespread consensus emerging on the need to preserve them with the likes of Leonardo di Caprio and Vladimir Putin lending their names to the cause. According to the World Wildlife Fund, there are approximately 3,200 tigers in the wild out of which almost half, about 1,411, are to be found in India. In more recent figures from the 2011 tiger census undertaken in India, it was estimated that the tiger population has gone up to approximately 1,706. The difficulties of authoritatively counting wild tigers aside, the fact remains that whatever the precise number, it is a significant and startling drop from the figure of over 40,000 tigers that were supposed to live in India at the turn of the 20th century. The reasons for this near-decimation of the species are well known and range from hunting, poaching, trafficking, human-big cat conflict, disease, neglect, lack of finances/knowledge/political will to protect wild animals, habitat destruction, climate change, a general disregard for other species, and, even, inbreeding. Against this backdrop, it becomes even more pertinent to query the social and psychic effects of big cats that, charmingly, speak out to you with a direct and simple message, and the tigeraphernalia that is increasingly publicly visible around the world. 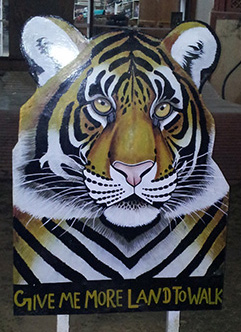 One approach would be to regard tigeraphernalia as yet another instance of the commodification of everything that can conceivably be thus rendered under the forces of advanced neoliberal capitalism. In keeping with the tendency to put a monetary value on all things and beings, an estimate by Travel Operators for Tigers (TOFT) claimed one Ranthambore tigress generated $130 million in direct tourism revenue in the 10 years of her adult life. India-wide figures for the tourism revenue generated by its 41 tiger reserves are hard to come by. But a mere visit to Ranthambore and the sheer numbers of tourists, high end hotels, safaris, and safari guides one sees there is evidence enough of the commercial importance of tiger tourism. Controlled and regulated tourism of the form in place in Ranthambore is generally not considered to be detrimental to conservation, and it has obvious benefits for the local economy. The commodification of big cats is most visible, to my mind, in the manner in which big cats are being strategically utilized to market, for instance, Cartier jewelry. An advertisement for a particular range of jewelry starred a leopard and has had over 17,322,893 hits on YouTube. This commercial epitomizes the manner in which big cats are visualized as sleek, exquisite and beautiful, just like – this video clip tries to convince us by recourse to some incredibly Orientalist imagery – the brand’s products. The ending of the advertisement when the model walks into the sunset, nay jewelry box, with the cuddly big cat sends a chill of horror down my spine. One central strand of my research focuses on human-big cat conflict in India and as I had the (ahem) privilege of living with a man-eating leopard in a small Himalayan borderland town for over three months, this ending fashioned by Cartier is my idea of the ultimate nightmare! In that respect, the Bosch vacuum cleaner advert is a much more realistic portrayal of tigers. Of course it, too, renders the tiger as somewhat cute with its human-like snoring and the funny, sleepy-but-annoyed expression on its face when it is rudely woken up by a loud vacuum cleaner. 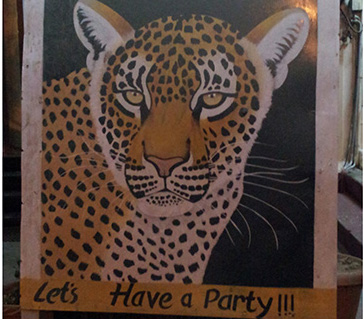 Another way to approach the anthropomorphizing and cute-ification of big cats through tigeraphernalia is to think of them, more benignly, as a means whereby we can come to relate to them, to feel for them, and thus to, in the end, protect them. This is surely the thinking behind all the cute animal products that conservationist organisations such as the World Wildlife Fund have taken to producing and displaying on a mass scale. Witness the profusion of cute and cuddly tiger, panda, dolphin, and other endangered animal products they use for campaigning and advocacy purposes. The question is, does this work? I found the friendly tigers and the partying leopard of the images reproduced here charming, and I definitely felt like giving them the space to walk freely. But was this because I am in any case, given my social and economic positioning, predisposed to fully signing-up to the central tenets of conservationism? Can it be that other than general cooing over the ‘cuteness’ of these talking big cats and a faint nostalgia for a wonderful safari experience, tigeraphernalia has no utility? It would be interesting to conduct an empirical study of the shifts in people’s perceptions when they are exposed to the material world that dominates the Ranthambore landscape. I am inclined to believe that images and things designed to strike emotive chords in humans must leave a trace, however faint or fleeting. And, indeed, the ‘material turn’ in the social sciences and the burgeoning literature on material culture would support this claim of mine. The failure of protectionism as an idea and practice is evidenced in the continuing imperilment of not just big cats but also other animals, charismatic or otherwise. If these talking big cats and tigeraphernalia can contribute even ever-so-slightly to the development of a sympathetic stance towards the preservation of big cats then, hey, let’s have a party, as our friendly Ranthambore leopard suggests.