Bronwen Everill is Class of 1973 Lecturer in History at Gonville & Caius College, University of Cambridge and an Early Career Fellow 2020 – 2021 at CRASSH. 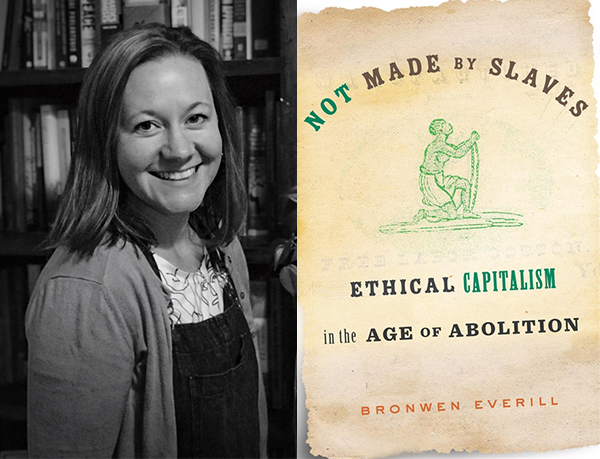 Q. Bronwen, what is your book Not Made By Slaves: Ethical Capitalism in the Age of Abolition about?

The book looks at the development of arguments for consumer-led activism in combatting the Atlantic slave trade and enslaved labour in the period from the late eighteenth to the late nineteenth century. Businesses run by abolitionists in this period attempted to use consumer self-interest to guide the market through adjustments to supply and demand towards more morally acceptable production practices.

I had worked on the abolition movement in West Africa for my first book, and I was struck by the similarity of the ethical consumer movements – boycotts, the ‘free produce’ movement, and the ‘legitimate commerce’ movement – to the kinds of ethical consumerism that is all around us today.

The chapters investigate different problems that arose in the supply chain as businesses and consumers attempted to create a more ethical capitalism: problems with defining the morality of different commodities; with determining acceptable levels of profit; with fraud; with debt; with using government influence. It then shows how the creation of these arguments about what was and was not ethical influenced the development of ideas of global capitalism more broadly.

Q. In your view, wherein lies the book’s main contribution to our understanding of the history of capitalism and slavery?

The book argues that West Africa is essential for understanding the development of commercial arguments against the slave trade and enslaved labour, and for understanding how ethical capitalism came to embrace ideas of ‘acceptable’ forms of slavery and imperial expansion.

They might be surprised to learn about the anti-slave trade movements taking place during the period in West Africa. The book argues that international commerce in West Africa was an important place for the development of these new ideas of ethical capitalism in part because there were both West African, and European and American merchants interested in shifting away from the Atlantic slave trade. It was the cross-cultural nature of this trade that forced new negotiations of the morality of consumer capitalism.

• Not Made By Slaves: Ethical Capitalism in the Age of Abolition was published by Harward University Press in January 2020

Everill repositions West Africa as central to the broader Atlantic story of 18th and 19th century economic morality, its relationship with commercial ethics, and the expansion of capitalism.