The #MeToo in China exhibition takes place in the Alison Richard Building from 21 – 25 March 2022.
It has been curated by a group of young UK-based Chinese feminists who support the #MeToo movement and Chinese feminism. None of them are professional curators. However, they are enthusiastic about introducing the Chinese feminist movement to a UK audience through this exhibition.

This exhibition charts the history of the Chinese #MeToo movement since 2018 and seeks to resonate with people beyond and across borders. By using a variety of visual, audio, and textual materials, this exhibition presents the personal struggles of sexual assault survivors and collective feminist actions against sexual violence in the Chinese context.

The theme of this exhibition is ‘The Voiceless Rise Up’. It reveals the spirit of the #MeToo movement in China. This movement has allowed those sexual violence survivors to tell their own stories and construct their own narratives in both individual and collective ways. This enables them to stand up against sexual violence and reverse power relations in a patriarchal society.

We were inspired by the #MeToo in China exhibitions held in Beijing, Guangzhou, Chengdu and New York in 2019. We think that an exhibition is a creative and effective approach to showcase the history of the #MeToo movement in China. Thus, we are eager to introduce this exhibition, with new elements and stories added to it, to the audience in the UK.

As #MeToo stories are increasingly censored in the official and public discourse of mainland China, we urgently want to hold this exhibition to keep telling stories of the Chinese #MeToo movement from both local and global perspectives, before these stories are forgotten or neglected in Chinese and global society. As Chinese feminists in the UK, we hope to support the #MeToo activists in China through this exhibition and honour their courage and actions that push this movement moving forward regardless of all the constraints and oppressions. 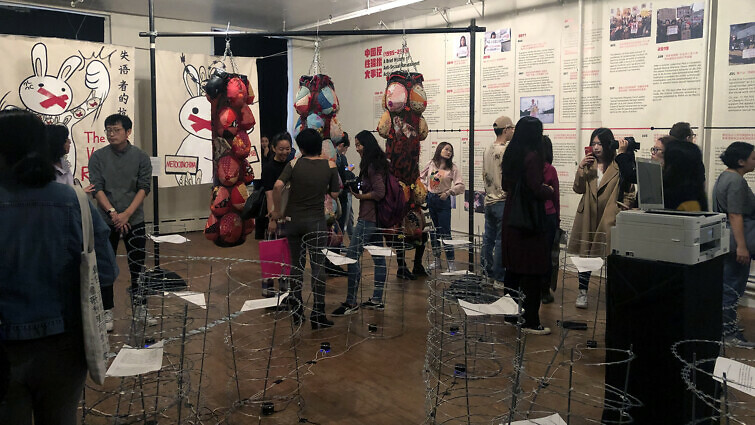 Q: Who is the artist in the exhibition?

The exhibition also features works by artist and photographer Qi, born in 1990, who has been working as a photojournalist since 2015. Her multimedia project Beneath the Scars, which traces the traumatic memories and lives of survivors of sexual violence, reveals the truth of the damage caused by sexual violence through a mixture of third-person and first-person spoken accounts. ‘Beneath the Scars’ received the ‘Inter Art Center New Documentaries Prize 2019’ ‘KG + Award 2020’ Grand Prix and it has been exhibited in three cities, including Beijing, Liangzhou and Kyoto.

We think that it is important to tell the story of the Chinese #MeToo movement in both personal and collective ways and from both local and global perspectives. #MeToo movement in China was not an organised movement. Rather, it was initiated and promoted by individual sexual assault survivors and their supporters. One voice echoes another. Gradually, #The MeToo movement reached the momentum to ignite public debate on sexual violence and gender inequalities in Chinese society. In this process, overseas Chinese feminists also joined in this movement and became an indispensable force in keeping the momentum of this movement, especially when the situation in China has become increasingly difficult for local activists to push forward.

In this specific context of the Chinese #MeToo movement, this exhibition presents the stories of the #MeToo movement from different angles. From an individual perspective, by exhibiting several private objects such as an umbrella and a T-shirt belonging to individual sexual assault survivors alongside the captions of their personal stories, the exhibition presents individual experiences about sexual violence. It also uses several photographic works of Qiqi to retell the lives and traumatic memories of survivors of sexual violence. From a collective perspective, this exhibition showcases a brief history of anti-sexual harassment activism in China that offers the audience an overall impression and understanding of the #MeToo movement in China.

On a transnational and global level, we also exhibit a series of photos of #We support Jingyao action in London in 2020 to present the engagement of several Chinese feminist activists in the Global feminist activism. A banner and a placard used in this action will be presented.

We hope that, by (re-) telling stories of individuals and collective actions in the Chinese #MeToo movement from a variety of perspectives, this exhibition can reveal the strengths and spirits of those #MeToo activists and the power of this movement. We hope these stories will empower and heal sexual violence survivors and feminist activists from different racial, gender, sexual and social backgrounds.

Q: Apart from those interested in, art and photography, who would this exhibition be of interest to?

This exhibition would be of interest to anyone who is concerned with the #MeToo movement, Chinese feminism, third-world feminism, ESEA activism in the UK, grassroots feminism and activism, and feminist art.

Q: Where can we find out more?

When the tide of #MeToo Movement came, we answered it with a big wave.