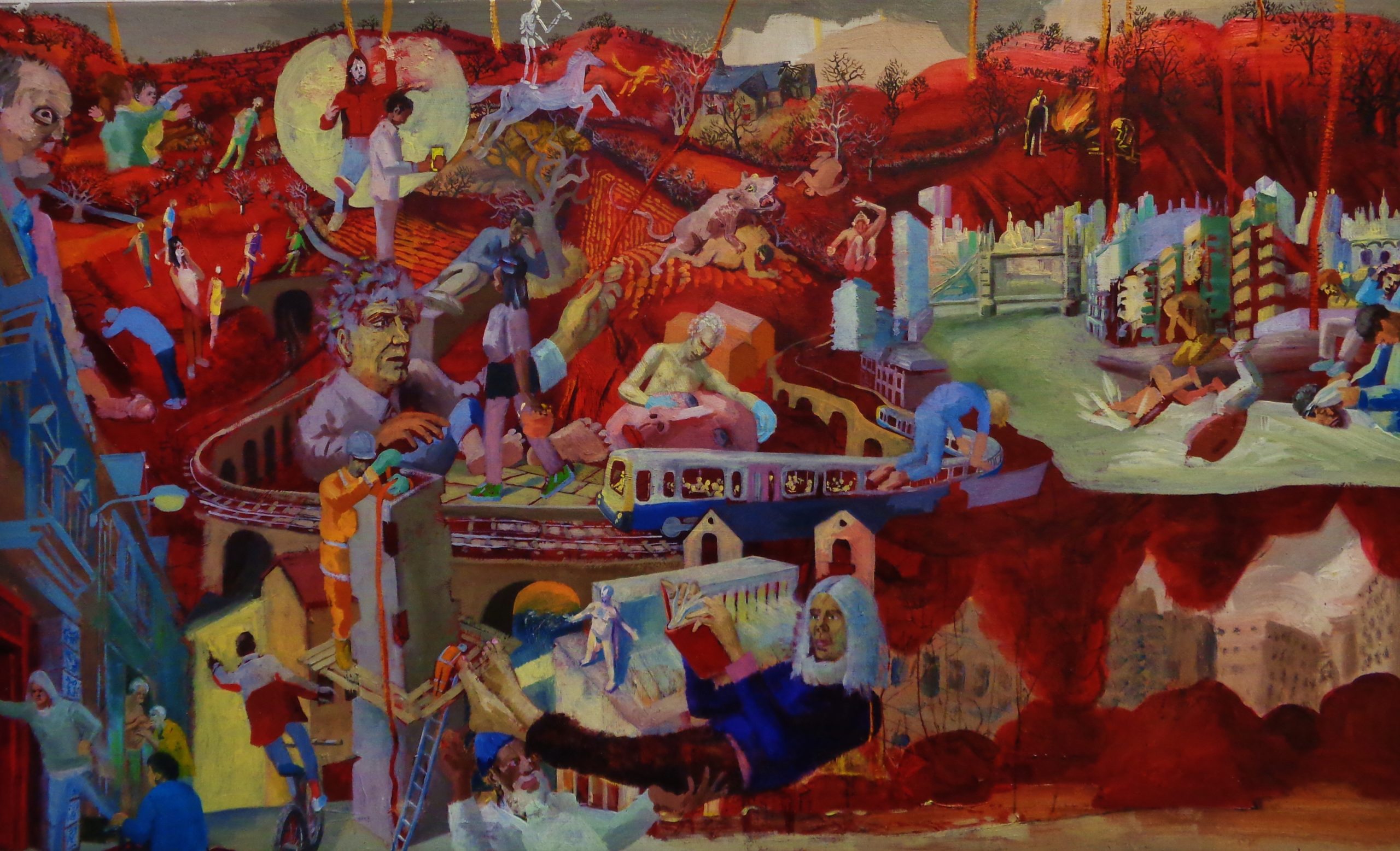 Q: Frank and Michael, what is your exhibition about?

The title of the exhibition Good and Bad Government refers to the Lorenzetti murals in Siena. Equally, our paintings embrace the city and the wider country and the links between them, their vitality and humanity, but also the huge problems we face. The murals in Siena were a touchstone for our collaborative project.

We have spent many happy hours, working alongside our communities, at the bottom of the telescope looking upwards at the machinery of government; making images of how this labyrinthine and ever-growing institution works in practice in some of the most challenging communities in this country. 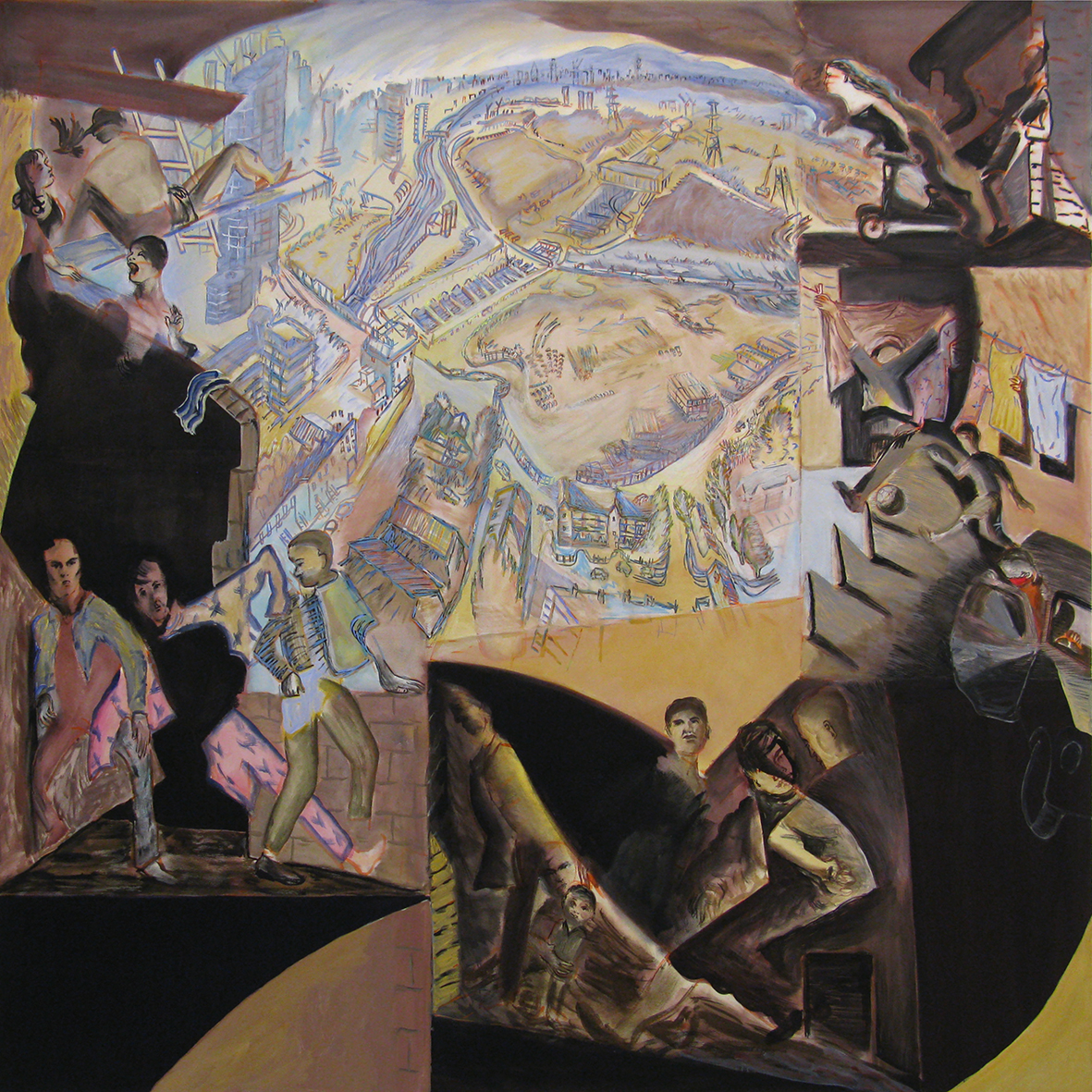 The Lorenzetti murals in Siena are panoramic views of the city and countryside. On opposite facing walls there is a city and countryside, ruled by a good government and a bad government. These inspiring murals visually demonstrate the effects upon the environment and people. This core idea set both of us off on different journeys after the project was conceived three years ago. 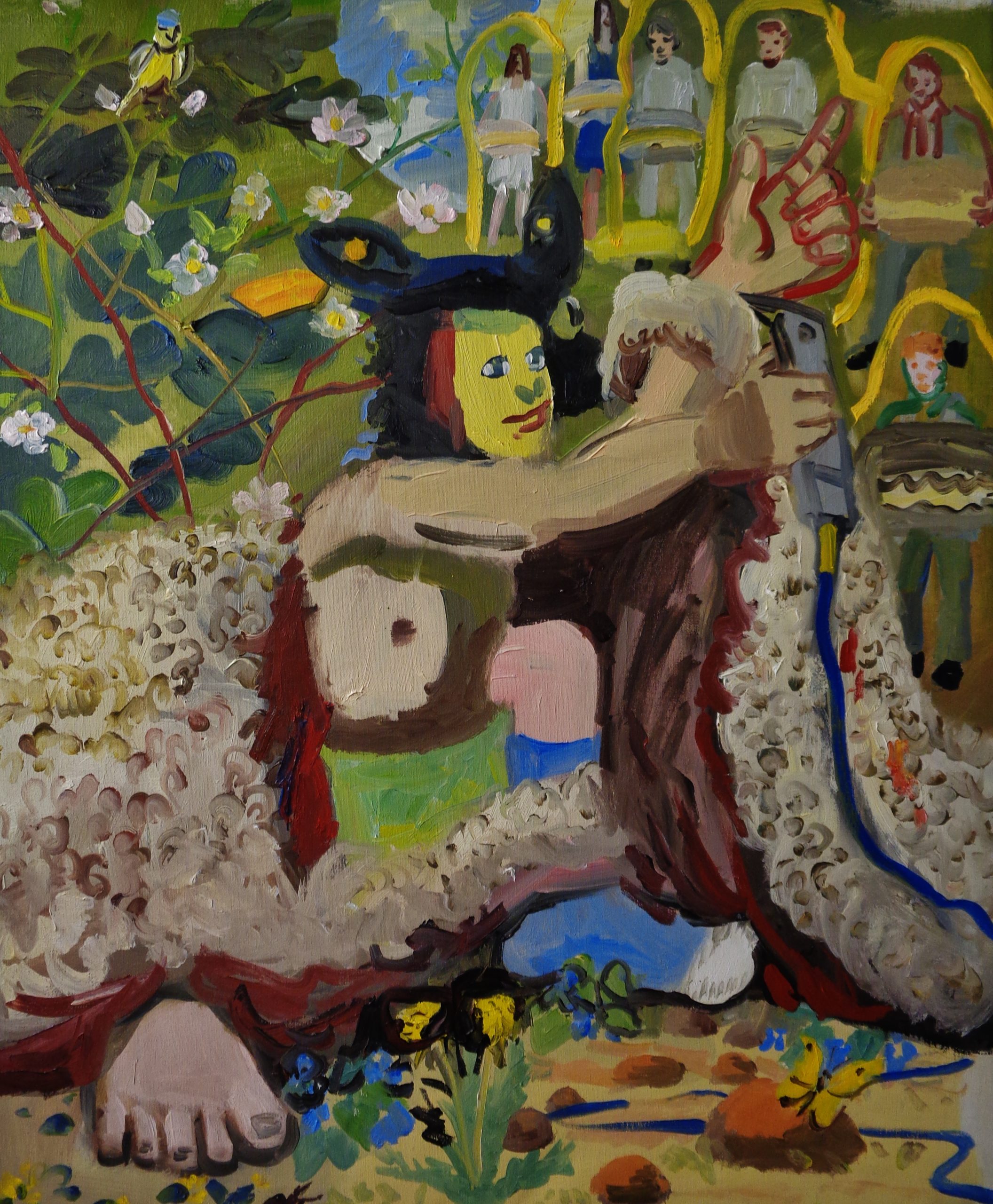 Q: How did you each interpret and work with the theme?

Frank Creber: For thirty years I have been based at Bromley by Bow Centre*, and my paintings in this exhibition are underpinned by many of the insights and conversations resulting from being part of the development of one of the biggest ‘Social Enterprises’ in the UK. Over the thirty years, we have come to realise that Government operates in one world and as an innovative Community Project we occupy a very different world.
The ‘Government’ world view is delivered through siloed structures, top-down management that is all about process/strategy/policy and reports. It is not overly interested in people and relationships, it creates a culture that fears uncertainty, is risk-averse, separates different functions and is not interested in connection. It can only see health in biomedical terms, anything else is just too complicated, it is interested in big things rather than small/micro things, and has mistrust at the core of its belief systems. Learning is about the tablets of stone that are handed down, it does not come through human experience and engagement, it creates soulless environments.

The ‘Innovative Community Organisation’ believes the future survival of the world depends on us looking forward and taking risks, new ideas here come out of the connections between different things, they are life-giving. It is deeply interested in life, it is curious about the world. It embraces chaos and sees it as a positive opportunity if harnessed, accepting that a lot of things are still very unknown, it embraces uncertainty as a positive. It believes health is about the whole of life, it doesn’t sit in a compartment, Its interested in quality and difference – it embraces people’s foibles and differences and doesn’t try to dumb them down.

The paintings on display are informed by the ideas above, and by many topographical cityscape drawings made on location in East London; drawings of local people made from observation and memory feed into the narrative process that is part of an unfolding personal visual chronicle, about the new emerging East London, both physical and social. As a painter I am focussed on an interplay of people and cityscape, this allows me to create motifs about hope, identity, regeneration, community and the tension between failure and success.

*Today, the Bromley-by-Bow Centre is internationally known and has been used frequently by the government as a national exemplar for integrated health care and a template for the successful regeneration of communities. The Centre is, today, a complex organisation, running a huge range of projects across different sites, both independently and in partnership with others. It works with 2,000 people each week, and its services are tailored to the needs of the whole community: families, young people, vulnerable adults and elders. It houses the first integrated health centre, children’s nursery, art studios, business and enterprise hub, café, communiversity and a range of other integrated services.

Michael Johnson: We had the challenge of taking on our theme without recourse to the prescribed menu of commonly recognised visual symbols for good and bad governance placed before the medieval artist. For me there has been ethical discomfort in that, not being subject to the strictures under which Lorenzetti worked, we arrogate to ourselves the ability to divine the nation’s best interests. It would be disingenuous of me to claim that the apparently random nature of my response reflects the liberality of a form of ‘Good Government’, especially as the strong reaction by some users of the Alison Richard Building resulted in several of my works having to be removed from display. Given the fundamental changes to our democracy unfolding as we painted, I found myself compelled to respond to these events in a more or less spontaneous manner.

Working between London and a provincial town also gave me a particular perspective which we felt complemented Frank’s London-centred paintings. If there was one defining theme for me it was the undermining of trust in government and our democratic institutions, initiated by the run-up to the Iraq war, continued recently in attempts to bypass Parliament, denigration of the same, undermining of the Supreme Court etc. Travelling across the Fens to London, past the great medieval seats of Church and University really feels as if the traveller is passing out of the City gates in the Siena murals. One feels so aware of that fragile crust of reclaimed, flood-threatened fertility upon which wealth early English power was established. This sense of history and vulnerability fed into my appreciation of momentous socio-political events unfolding around us. I started to sketch fellow passengers in order to connect but also as a metaphor for citizens from all walks of life sharing a wondrous but also perilous journey, all of us carrying a burden both personal and political. Being the Cambridge train one was drawing a builder one minute, a young mother or Physics professor the next. Many passengers encouraged my work and loved the narrative into which I revealed that I was weaving them. 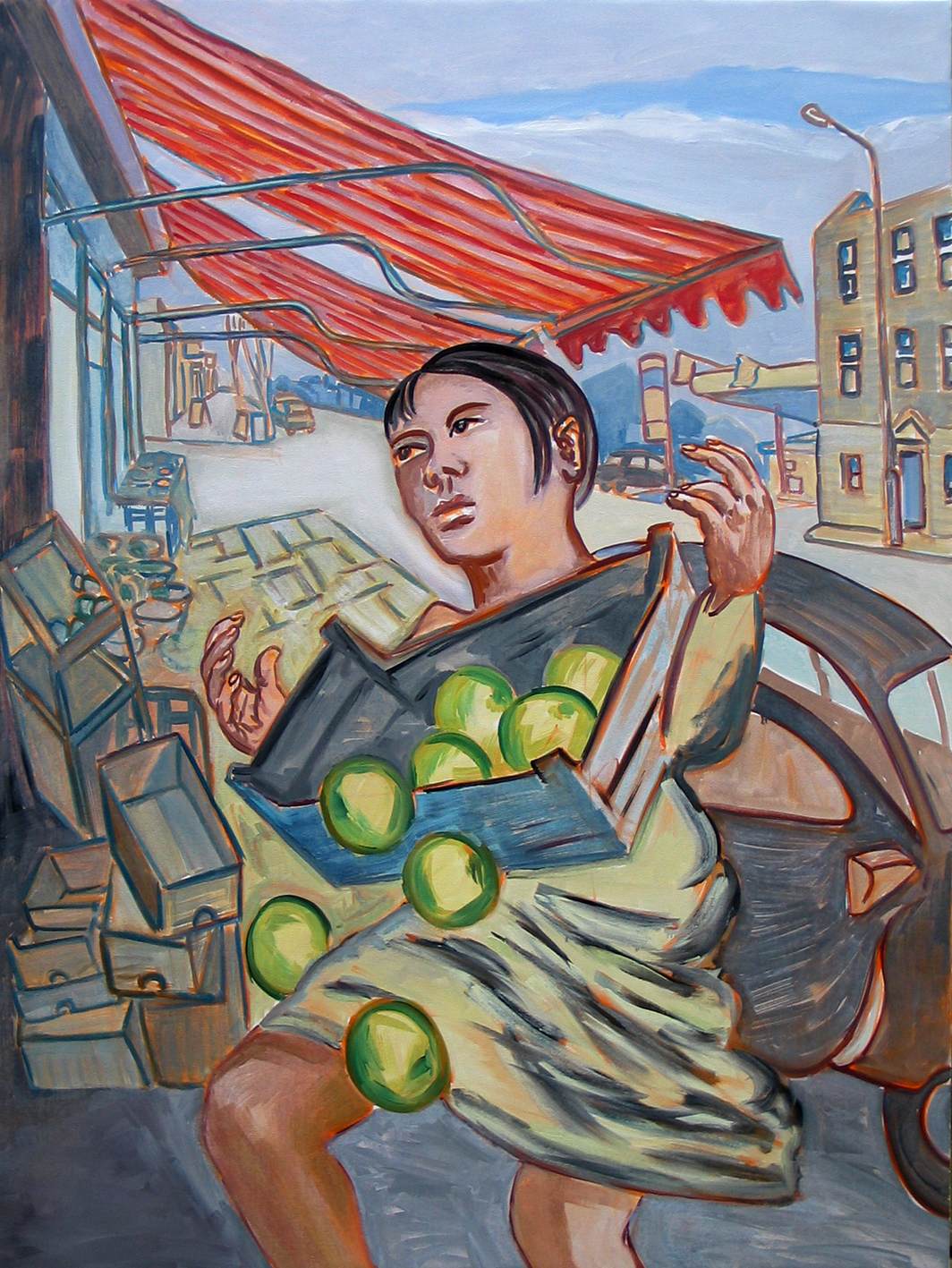 Q: Apart from those interested in art, who will the exhibition be of interest to?

Michael Johnson: As I said above, I have sketched members of the wider public who were intrigued by the idea and how I was ‘doodling’ my way towards it on the train. It would also prove a talking point for students as many of the paintings touch upon their areas of research and study.

Frank Creber: I have experience as a public artist making many murals with communities and Children in Schools and in partnership with Business. This long engagement with public art has led me to believe that art should in some way be a narrative for the community, and I have deliberately steered away from the work becoming self-referential. I think the work could be of interest to anyone who is involved in Community development and Public Art. 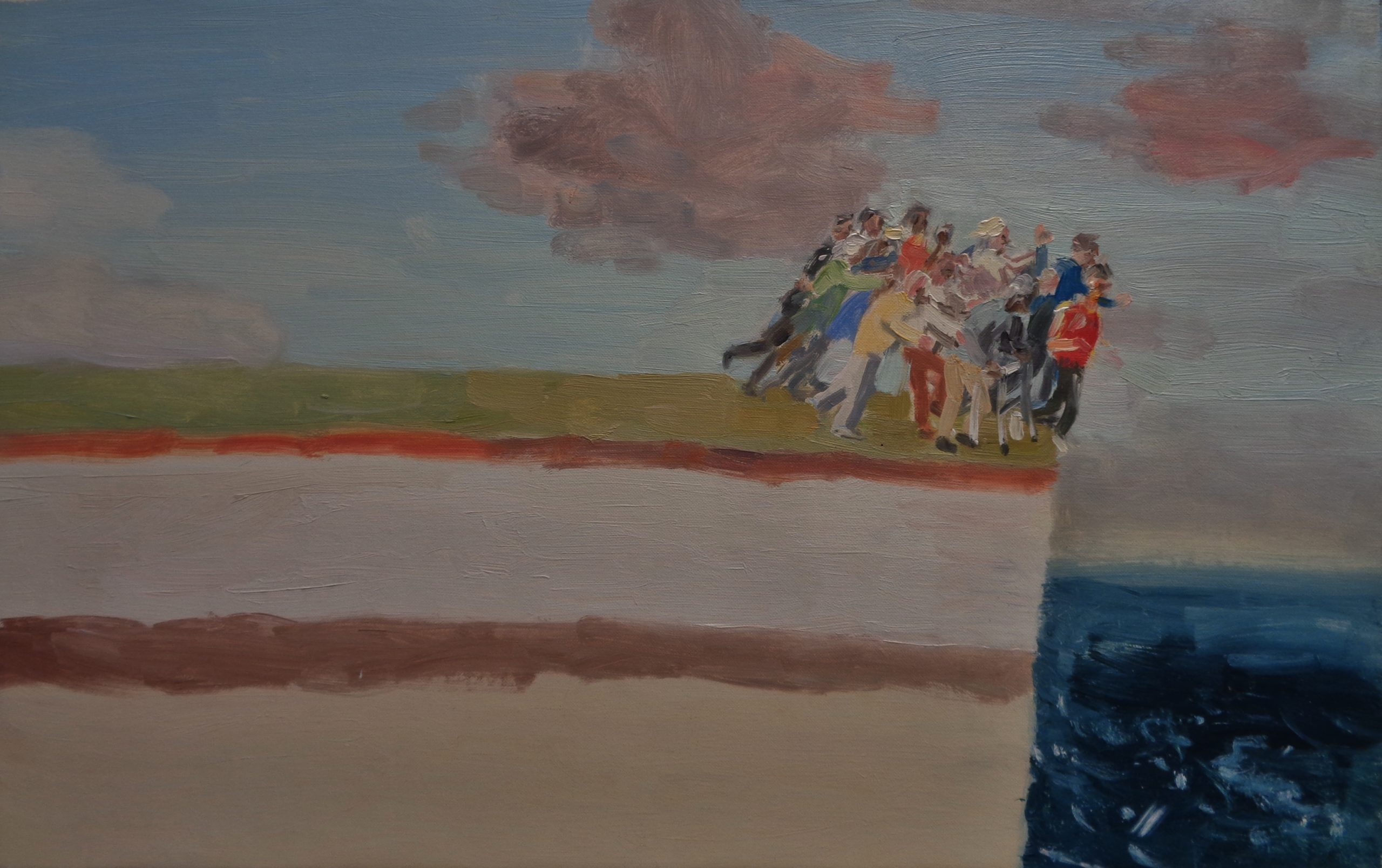 Michael Johnson, Englishmen Herding Themselves off a Cliff

Michael Johnson took a First in Fine Art at Reading University followed by a Postgraduate Scholarship at Byam Shaw School of Art. He has exhibited widely in solo and group shows. He has been shortlisted for the Ruskin Prize, selected for the Threadneedle Prize, The Marmite Prize, Lynn Painter Stainers Prize, The Derwent Art Prize, Discerning Eye and is a frequent exhibitor at the Royal Academy Summer Exhibition. He has work in the Museum of London and is represented in collections around the world. He has recently been an Artist in Residence at Dumfries House, Scotland.

Working for 35 years at the celebrated ‘Bromley by Bow Centre’ and for many years as Creative Director and Artistic Director of Water City CIC, Frank Creber draws upon his knowledge of the detail of people’s lives and their stories of community engagement. He has spent many years working alongside colleagues to develop programmes and activities that integrate art, health, training, enterprise and the environment, with a track record of enabling local people to develop positive relationships, create a healthy home and achieve a sense of purpose.

The most profound (and simple) insight from our experience at @Bromley_by_Bow over the years is that more medicine is far less effective at driving better health than having more friends, a sense of purpose in your life and the feeling that you belong in a strong community.