Karen Pinkus is Professor of Romance Studies and Comparative Literature at Cornell University where she is also editor of the journal diacritics. She is author of numerous publications in Italian studies, environmental humanities, film and literary theory. She is Leverhulme Visiting Professor at CRASSH and the Department of Modern and Medieval Languages, University of Cambridge. 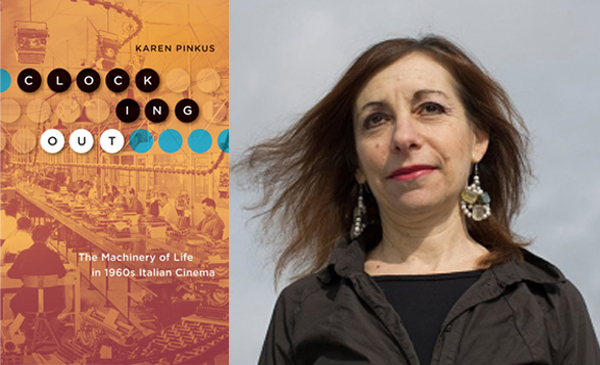 Q. Professor Pinkus, what is your book Clocking Out about?

I look at the intertwined relationship of cinema, machines and labour in the early 60s in Italy. This is a moment of transitions: post-war desolation gives rise to very fast economic boom (experienced by some, but not all, of course); in cinema, a transition from stark neorealism to ‘boom comedies’ that foreground the foibles of normal Italians trying to adjust to a modern and industrialised culture; from the analogue and artisanal to the digital and mass-produced. It’s the height of Fordism (at FIAT, in Turin), tinged with a peculiar Italian benevolent paternalism (at Olivetti, the office machine company in nearby Ivrea). Workers struck, but we are not yet at the full-blown anticapitalist movements that will characterise the later part of the decade and beyond. There is a historical/archival dimension to the project, but it is also broadly speculative, with implications for what it means to work and live today. These were early years in the perennial debate about automation. I ask, also, about the possibilities and limits of representing work in the factory or office.

Honestly, most of my academic life for the past decade has been focussed on climate change so I wanted to write a book that would take me away from that very depressing subject. Italy in the 60s is a very attractive subject. A typical commedia del boom might include lively scenes at crowded beaches (difficult to watch in the days of the coronavirus) or people riding around on Lambrettas, or drinking cocktails, accompanied by up-tempo jazz music. There might be a melancholic ending, but you’ve also managed to escape grim reality, for a period. I’ve written on Italian culture under fascism and in the immediate post war. I’ve always been attracted by the design and culture of this period in Italy. I have studied it in various contexts and in fact, at one point this was going to be a book about Olivetti, the office machine company founded in the early 20th century in Ivrea, a small mountain town between Turin and Milan. Olivetti is still a crucial element in Clocking Out, but there has been so much written on the company that I felt there was little room to intervene. Along with all of these elements, I was and still am interested in forms of anticapitalist resistance in Italy, especially as they developed later in the 60s in movements like Autonomia and Operaismo. These movements have also received a lot of attention by scholars and activists. It would be easy enough to dismiss the more escapist narratives or elements of design that give one pleasure, but I wanted to actually take my own attraction to these elements seriously, even if nostalgia seems to operate counter to a political position. In the end I hope to have captured a certain ambivalence toward and in the period.

I experimented for a long time, as I mentioned. After several years of writing and thinking, I took a rather risky decision to structure the book around a series of scenes from an admittedly rather minor film called ‘Renzo and Luciana’, an episode from the 1962 omnibus, ‘Boccaccio ’70’. Each of the ‘scenes’ allows me to explore themes from the period. It’s a kind of freeing structure as opposed to a more traditional book. Like the film itself, my book offers vignettes but without dictating a precise solution to various social problems or ends of narratives.

Q. In your view, wherein lies the book’s main contribution to our understanding of our work, social and cultural lives then and today?

I’m not good at this kind of question. I always have modest aims for my books. Maybe that’s related to a certain feminist training or sensibility. Someone said this is a good book for thinking with: thinking about what the possibilities were and are for living and working (or refusing to work), creatively, but within limits.

Many of the themes or anxieties that seem to us entirely new today turn out to be cyclical and well-rehearsed, perhaps with less intensity: the beginning and ending of the work day, the implications of a universal basic income, ambivalence about automation, Keynesianism as ‘common sense’ versus ‘new’ financial instruments, nationalism/populism and technology, worker safety versus the need for productivity, and on and on. I didn’t start out to write a book about the present and to be sure, I do my best to provide rigorous context, but the resurfacing of these still unresolved questions, perhaps even more during the pandemic, strikes me as quite uncanny.

In this wonderfully inventive and beautifully written book, Karen Pinkus adopts a cinematic lens to capture the dynamism of cultural production and social life in early 1960s Italy. But the questions she investigates – about the transformations of work by technology, the relations between humans and machines, and the powers of cinema for social analysis – are just as urgent for understanding today’s social world.