Dr David Moshfegh is a Visiting Fellow from IE University in Madrid. He was at CRASSH in Michaelmas Term 2017.

My manuscript project, Ignaz Goldziher and the Rise of Islamwissenschaft as a ‘Science of Religion’, engages the historical understanding of the emergence and development of Islamwissenschaft from a standpoint distinct from the ‘Orientalism debates’ of the last decades, arguing they have down more to occlude than illuminate it.  Since the work of Edward Said, scholars have become mired in often bitter polemics about whether Orientalism (and the study of Islam, particularly) represented an inherently political, imperialist discourse of subjugation and dehumanization, or an exemplary epistemic venture of growing professionalization or a primarily cultural project of European encounter and projection in an increasingly multi-cultural, global world.  By refusing to choose between Orientalism as politics, knowledge or culture and keeping each of these moments alive, I provide a radically different narrative of the trajectory of Islamwissenschaft by deriving its development out of the ‘science of religion’ tradition in nineteenth century European scholarship.  In reconstructing this scholarly tradition, I argue that our familiar concept of ‘religion’, while putatively encompassing one of the oldest and most definitive aspects of human civilization, emerged in fact within the liberal Protestant theology of the nineteenth century.  In this context, it represented a bid to deflect ongoing attempts in the Enlightenment to reduce ‘religion’ to other aspects of human experience, particularly the epistemic and the moral.  To make this possible, ‘religion’ was defined in terms of 'religious experience’: an autochthonous, autonomous facet of human life and history that was the most universal experience available and as such connected each person organically and even ecstatically with the whole.  The ’science of religion’ tradition and its critical historical approach to religious texts and phenomena emerged within liberal Protestant theology over the course of the nineteenth century to account precisely for this posited trans-historical, trans-cultural facet of human experience.  The ’science of religion’ and its critical historical methodology of historicizing and humanizing sacral texts and experience have most often been viewed in a debunking light, namely, as having decisively enervated religious energies and ultimately reduced religious life normatively to little more than moral and social uplift.  I argue, by contrast, that the science of religion encompassed a sincere religious endeavor, whose critical historical approach aimed at the historicist purification of ‘religious experience’ and whose very undertaking was thus viewed as part of the teleological development of ‘religion’ towards the fully universal experience it was meant to be.  Over the course of the nineteenth century, distinct liberal Protestant branches of the science of religion emerged, almost all of which interpreted the requisite critical purification and idealization of Christianity in terms of the invidious Aufhebung of the Jewish sources, the Jewish particularism, within it.  But, this Protestant science of religion came eventually to be flanked by a rival Jewish one in Jewish Reform, namely, Wissenschaft des Judentums, which sought to project the Jewish tradition as the one meant to fulfill the teleological task of ‘religion’, namely, to become critically purified as the universal faith of humankind.  In this fashion, the reformist Jewish thinker, Abraham Geiger, arrived at a Jewish supersessionism, projecting the ultimate Jewish mission of overcoming the alleged Christian descent into paganism. What I argue is that Islamwissenschaft emerged, at the turn of the twentieth century, in the work of the Hungarian Jewish Orientalist, Iganz Goldziher, as yet another rival bid at the critical historicization and idealization of a religious tradition, this time, that of the Islamic heritage, as the one capable of the purification necessary to encompass the religion of all humanity.  Viewing Islam as a sister monotheistic tradition to Judaism, and unable to secure an autonomous position in the Hungarian Jewish and academic context to fulfill his critical reformist mission with regards to Judaism, Goldziher shifted this mission to Islam and thereby founded Islamwissenschaft.

David Moshfegh earned his BA in History and Philosophy from Stanford University and his PhD in History from U.C. Berkeley, where his work in European intellectual history focused on the intersection of the histories of scientific and academic disciplines, Orientalism and imperialism. His manuscript, “Ignaz Goldziher and the rise of Islamwissenschaft as a ‘Science of Religion’” places the advent of the ‘Science of Islam’ within the nineteenth century context of Protestant and Jewish reformists who competitively historicized and idealized their respective traditions. He is also currently working on a second project, entitled, “From Kulturpolitik to Jihad: The Rise of Islamwissenschaft and German Orientalism in the Era of WWI”, that examines the development of the new Islamicist discipline in German Orientalist scholarship in the closing decades of the nineteenth century and tracks the field through the ‘Jihad debate’ within it during WWI. In conjunction with his work in European history, he has undertaken significant research within the Middle-East field on the trajectory of religious minorities in Islamic history and has co-authored the sections on Jewish communities in the Islamic context for the third edition of Ira Lapidus, A History of Islamic Societies. He is Professor of History and Humanities at IE University in Madrid, Spain and was a Visiting Fellow at CRASSH and Wolfson College, Cambridge University in 2017. 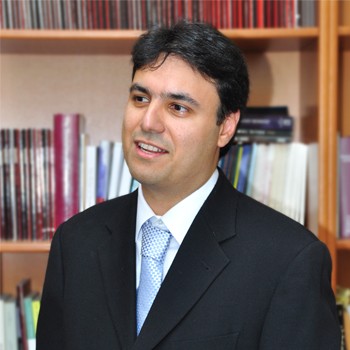