Dr Brahma Prakash is the Charles Wallace India Trust Fellow 2019-20 and will be at the Centre in Michaelmas Term 2019.

When Indian elites were celebrating freedom at midnight with Nehru’s Tryst with Destiny, a poor farmer from a village in Bihar was witnessing something more amazing. He ‘literally’ saw the sun of the empire setting down and the flag of the nation (Tiranga) flying on the moon. The empire on which sun never sets was too real for him to be more than real. The epics and stories of the subaltern communities in India are full of such imaginative realities.  While the communities remain oppressed in the caste-feudal and colonial structure, their epics and narratives often tell their (moral) conquest over the caste-feudal and colonial values.  They are still performed, appropriated and re-created to serve contemporary politics which make them ideological powerful and a major site of contestations in India and SouthAsia. Their stories often have no connection with the historical realities, but they play vital roles in their everyday struggles. I call them ‘epical subalterns’, the dormant social agents whose meaning of life, struggles to live in and the potency to resist the injustices can be located in the epical formations of the subjects and events.

The Epical Subalterns try to understand the imaginative and performative practices of the subaltern communities in relation to their everyday lives and struggles in the north Indian state of Bihar.  It will particularly analyze the epics and narratives that situate the self and imagination of the subaltern communities at the centre. Epic emerges as an important analytical category to address the aesthetico-political dimension of the performance.

Dr Prakash will discuss his recent book Cultural Labour at 4pm on Wednesday 20 November at the English Faculty Board Room, organised by the Graduate Seminar for Postcolonial Literatures, Faculty of English.

Dr Brahma Prakash is Assistant Professor of Theatre and Performance Studies at the School of Arts and Aesthetics, Jawaharlal Nehru University (JNU) in New Delhi, India. He is the author of Cultural Labour: Conceptualising the ‘Folk Performance’ in India (New Delhi: Oxford University Press, 2019). He earned his BA from JNU, MA from National Central University, Taiwan and PhD from University of London, UK. His research intersects theatre and performance studies, ritual, festival and protest studies in relation to the questions of marginality, aesthetics and cultural justice. He teaches courses on Living Traditions of Indian Performing Arts, Regional Theatre and Performance Traditions, Non-Western Aesthetic Theories and specializes in the folk culture and performance traditions of North and Eastern parts of India. 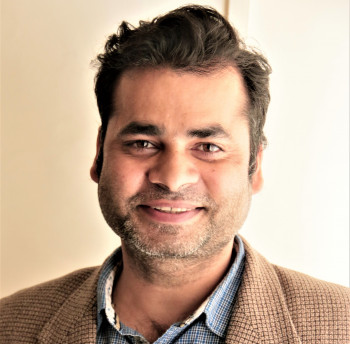