Witchcraft, the Devil and Emotions in Early Modern England: 5 Questions to Charlotte-Rose Millar

The biggest thing that surprised me was the lack of change in how witchcraft was described across the centuries. 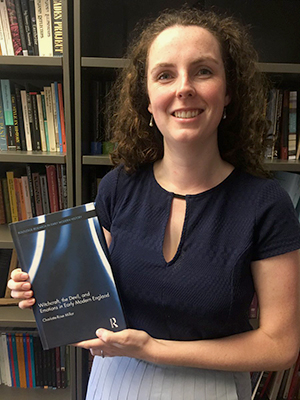 Charlotte-Rose Millar is a Postdoctoral Fellow in the Institute for Advanced Studies in the Humanities at the University of Queensland and an Associate Investigator with the ARC Centre of Excellence for the History of Emotions (1100–1800). She is the author of numerous works on witchcraft, diabolism, emotions and sexual practices in early modern England and has won two prizes for her published work. During Lent Term 2018 she is a Conversions in the Early Modern Period Fellow at CRASSH – and we were able to ask her a few questions about the recently published Witchcraft, the Devil and Emotions in Early Modern England.


Q. Charlotte, what is it like being a Visiting Fellow at CRASSH/Cambridge?

It’s great! It’s such a wonderfully stimulating environment and I have really benefitted from being around so many brilliant and diverse researchers. The main danger is not getting completely distracted by all the seminars!

Q. What is the subject of your monograph, and how did it come about?

My monograph is called Witchcraft, the Devil and Emotions in Early Modern England and the title pretty much sums up what it’s about. The book really came about because of my interest in the role of the Devil in English witchcraft. Traditionally, historians have viewed English witchcraft as a largely non-demonic crime. In my book I wanted to challenge this long-standing view by arguing that the Devil played a central role in English witchcraft pamphlets. In these pamphlets, the devil often appears as a familiar – a small, helpful, often malicious demonic animal that takes the shape of a common or domestic animal such as a chicken, dog, cat or ferret. Think Hedwig in Harry Potter or Salem in Sabrina the Teenage Witch. In the book I explore how witches were believed to make pacts with these familiars, to send them to perform malefic acts and to even engage in loving, sometimes sexual relationships with them.

The other main point of my book was to analyse the importance of emotions in witchcraft accusations and to demonstrate how strong emotions such as fear, love, lust, malice, vengeance and hatred were crucial in defining a witch. I looked at the types of emotions that were attributed to witch/devil encounters and showed how emotions help us to understand witchcraft belief.

Q. During your research for the book, did you stumble across something unexpected that you’d like to share with us?

Yes! The biggest thing that surprised me was the lack of change in how witchcraft was described across the centuries. One of the main things I wanted to do in turning my thesis into a book was to expand the timeframe – my PhD covered the 17th century, but the book explores the entire period of state-sanctioned witchcraft accusations and prosecutions in England – that's from 1563 until 1735 when the witchcraft statute was finally repealed.

I assumed that by looking across this almost 200 year period that I would find distinct differences in how witchcraft was represented in print – but I really didn’t! The only thing that really changed was the context, particularly in terms of how witches were associated with whatever religion or sect was currently being maligned. In the 1560s witches were sometimes aligned with Catholicism, in the mid 17th century witches were sometimes compared to Quakers, and by the early 18th century witches were more likely to be associated with non-conformist religious groups.

But this really is one of the few changes. At the very start of witchcraft prosecutions in the 1560s and right through into the 1700s I found depictions of witches interacting with the Devil in the shape of a familiar; witches as practitioners of malicious magic; witches as collaborators who work with each other to supposedly spread evil; and witches as female. These tropes continue throughout the entire period.

Most academic libraries will have a copy – and if they don't, you should ask them to get it! The Cambridge University Library has a digital copy which you can go and read – but I’m also hoping that they’ll get a print copy soon. If you’d like to read it, please ask the library to order the print copy!

Q. Could you tell us a bit more about your current project?

Absolutely. I’m currently working on a new project on ghosts in early modern England. What got me started on this project was my interest in changing supernatural belief in early modern England, particularly after the Reformation. Many Protestant reformers argued that ghosts were not humans coming back from the dead but, rather, were devils (or sometimes angels) disguising themselves as the deceased. This really should have led to ghost beliefs going into decline; but ghost beliefs actually increased after the Reformation.

I want to look at why this was, at what relationship ghosts had with devils and, importantly, how emotions can help us to understand changing attitudes towards ghosts. I am interested in tracking emotional responses to ghosts – whether these be fear or delight or curiosity or amazement – and analysing what particular form that emotional response takes. There are some great descriptions of bodily fear – such as people dropping into fainting fits or soiling themselves with fear. By looking at these descriptions I hope to shed light on how men and women viewed ghosts and whether these views changed over time.

Bonus question (if you dare): Please summarise Witchcraft, the Devil and Emotions in Early Modern England in a tweet.

New book highlighting the overlooked role of the Devil in EM English witchcraft and exploring how emotions were key to witchcraft acts and accusations. #emostorians #twitterstorians 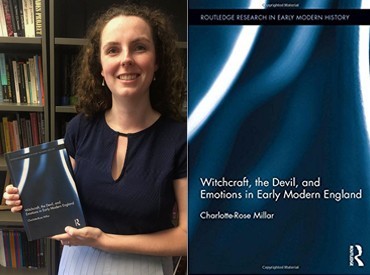