The discussions sparked by the presentations and the creative energy unleashed by the workshops testify to a growing interest in translation as both a highly intellectual and refreshingly experiential practice. The second series of Cambridge Conversations in Translation (CCiT), our CRASSH-based research group, concluded in style on Friday 26th May 2017 with a suitably trans-disciplinary one-day event. Translation & Multimodality explored intersemiotic translation across a variety of artistic forms and innovative multimedia formats. Setting up laptops, positioning and timing projectors, displaying a wandering exhibition, moving tables and chairs, not to mention sourcing a piano, was no mean feat. To our great relief and amazement all went smoothly (including the Skype connection to Japan), and, crucially, the participation of an enthusiastic audience made it all the more worthwhile. The discussions sparked by the presentations and the creative energy unleashed by the workshops testify to a growing interest in translation as both a highly intellectual and refreshingly experiential practice.

The day opened with a talk by Gunther Kress on the concept of translation as a social semiotic form of communication. Kress’s discussion challenged the traditional centrality of language in processes of intersemiotic translation. Drawing from a wide range of multimodal interactions and environments – from education to the operating theatre, from Western to East-Asian traditions – he showed us why this is such an important topic in the modern world. Among the many fascinating examples he provided, that of a primary school child’s renderings (textually and visually) of a visit to the British Museum was characteristic in its complex simplicity. The boy’s description of the school outing was a very factual and dry account of travelling to the museum and back, with only a fleeting mention of the visit itself ('we saw the mummies'). In the drawing, on the other hand, the chronology that dominates the narrative is absent, and the museum takes centre stage, with its imposing and elegant columns in the background and the mummies in the foreground, one of which has the bandage undone and appears scarily alive!

The challenges, and delights, of intersemiotic translation were tried out by attendees themselves in the afternoon workshops, but before engaging with that, they were confronted with a unique experiment, and a rather sui generis presentation. Because the speaker, Rosa van Hensbergen, could not be present on the day, she prepared two short b/w films to reflect on Japanese experimental performance, in particular the butoh work of Hijikata Tatsumi and the performance work of Dumb Type founder Furuhashi Teiji. Projected at the same time, one above the other, on the side wall of our seminar room, the features included extracts from the performers’ work (top film) and van Hensbergen’s commentary and other visual/textual material (bottom film):

Discussing Tatsumi’s work on the ailing body and Dumb Type’s work Lovers (see clips below) van Hensbergen explored notions of mediation through the body. The audience was able to ask van Hensbergen questions (via Skype) about some of the issues raised by her work. Kress’s thoughts about moving beyond linguistic translation and expanding the domain of meaning, found a perfect echo in this presentation, as did his argument in favour of overcoming superseded notions of multi-disciplinarity to embrace trans-disciplinarity.A further exploration of these possibilities was offered by Manuela Perteghella’s work with TransARTation!, the inter-art exhibition of translated objects which she co-curated. Funded by the Arts Council England, the exhibition opened in Scotland in March 2017 and then moved to Norwich in April, and we were delighted to be able to host part of it at our CCiT event in Cambridge. The exhibition rests on the assumption that translation (both the process and its outcome) can manifest itself in artistic and multimodal outputs, and therefore by bringing together a heterogeneous group of creative individuals – writers, poets, visual artists, performers, and translators – the exhibition has generated a remarkable opportunity for collaboration across genres and artistic media. Perteghella presented a selection of representative examples, among them Elise Aru’s The Shadow’s Skin [pictured below], the creative translation and installation of selected aphorisms and reflections from La Peau de l’ombre written by Joël Gayraud. 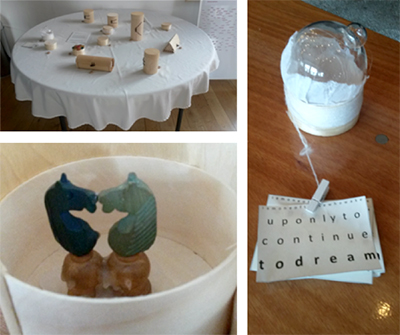 The last part of Perteghella’s session was devoted to a hands-on experiment of intersemiotic translation. The audience was asked to provide a visual translation of the 1916 poem ‘Tramonto’ [Sunset] by Giuseppe Ungaretti. Armed with only markers and paper, but also a crib and a published English translation of the poem, the activity produced an array of renderings that ranged from black-and-white drawings to three dimensional paper artefacts, to smart phone digital ‘art’ [pictured below]. It was striking to see how a seemingly simple but evocative three-line poem elicited the most disparate responses, a powerful reminder of the intimate relation that we establish with a literary text, and how an interpretative response to it conjures up images that are ultimately the result of a dialogue, possibly a tension, between many voices, experiences and subjectivities. 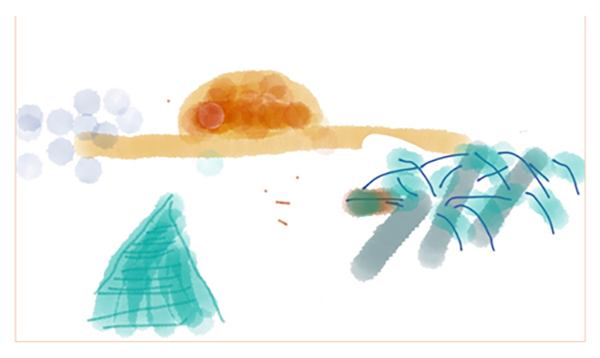 The creative energy of our group had been sufficiently warmed up at this stage, to the extent that we readily dispensed from the reassuring composure of the chairs and stood up in a circle at Hannah Conway’s request, eager to explore the next multimodal frontier. How do composers make decisions, translating narrative, movement or tactile stimuli into music? Through Hannah’s amazing conducting and creative abilities we caught a glimpse of how musicians translate visual, written or kinetic input into sound, rhythm, mood etc. to influence and affect the perceptions of an audience. Following her prompts and some basic beats, clapping our hands tentatively first and then with increasing confidence, by the end of the session we were a chorus line singing the poem by Ungaretti with Conway improvising at the piano.

If the morning sessions provided us with some theoretical frameworks for a discussion of multimodality, the afternoon workshops offered us the opportunity to put it into practice and for a good hour we translated into music and ‘drew’ poetry. There was a palpable sense of purposeful creativity, chuckling child-like excitement, and an equally tangible awareness that our outcomes, especially our visual renderings, paled in comparison to the school child’s drawings discussed by Kress. It also turned out that some of our attempts at music making were decidedly of pre-school standards. But we had great fun and we left the Alison Richard Building uplifted and inspired, multimodally, of course. 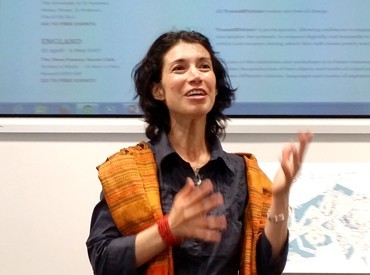