The Many Masks of Dr Tulp

Nowhere else is the lived experience in Covid spaces and their muted theatricality made more tangible than in Tulp’s Theatre of Zoom. It acts as a magnifying lens for our current moment. Tulp’s virtual autopsy cuts across the experience of online teaching, acting as it does in a void with next to no audience responses. 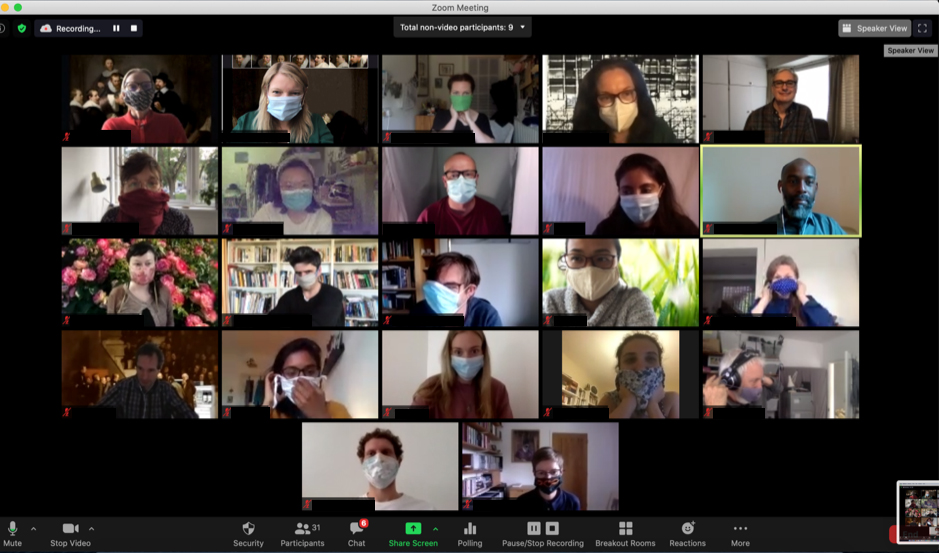 Figure 1: (centre) masked finale of the CDH Open Workshop engaging with Dr Tulp and the Theatre of Zoom on 16 July 2020; (right) Annja Neumann setting the scene for the workshop, screenshot by Annja Neumann.

ACTOR 2/ MINISTER
They’re not actually in the room,
are they?

DR TULP
Don’t be silly, none of you are.
We’re on Zoom.

A final shift. To the quietest, most intimate space.
Tulp refers to the body. 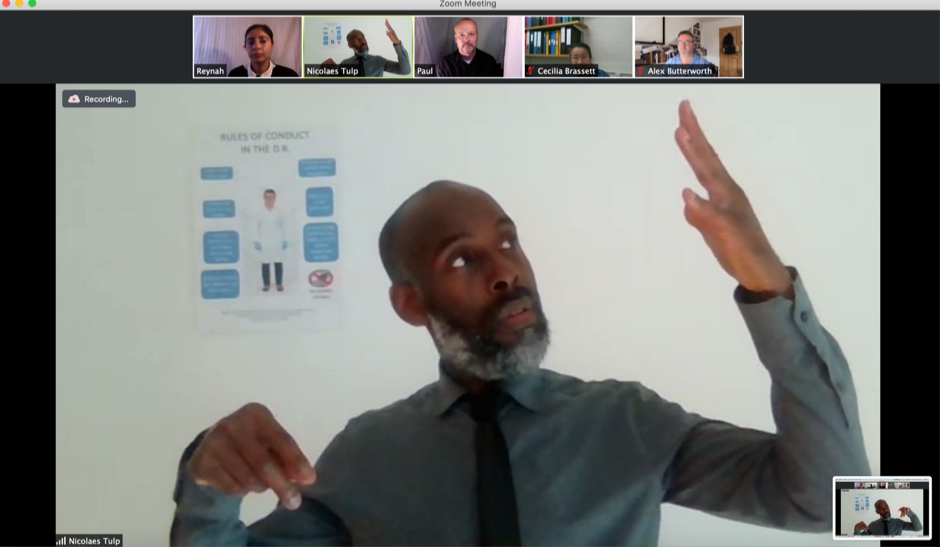 Figure 2: Martin Edwards as Nicolaes Tulp in the final scene of the live-streamed online performance of Dr Tulp and the Theatre of Zoom, 16 July 2020, also starring Reynah Oppal as Reynah/ Actor 2 and Paul Panting as Paul/ Actor 1, screenshot by Annja Neumann.

We’re here because of the Covid-19 outbreak which led to the lockdown of public life in Britain at the end of March 2020. ‘Here’ refers to a virtual environment during a live performance on Zoom.

Stationary bodies, boxed into the frames and views of a Zoom meeting, have become the eerie mise-en-scène of the Covid-19 Pandemic; a global health crisis which poses significant questions about embodiment and our shared experience in public and private spaces.

Our own bodies and lives have been unduly reduced to rectangles.

Inspired by the intense theatre of looking in Rembrandt van Rijn’s group portrait The Anatomy lesson of Dr Nicolaes Tulp (1632) and by the presence of Tulp and his surgeons on social media during lockdown, a group of academics, writers and artists co-produced a Zoom theatre performance. Dr Tulp and the Theatre of Zoom engages with the experience of embodiment and medical ethics in the wake of the Covid-19 Pandemic. 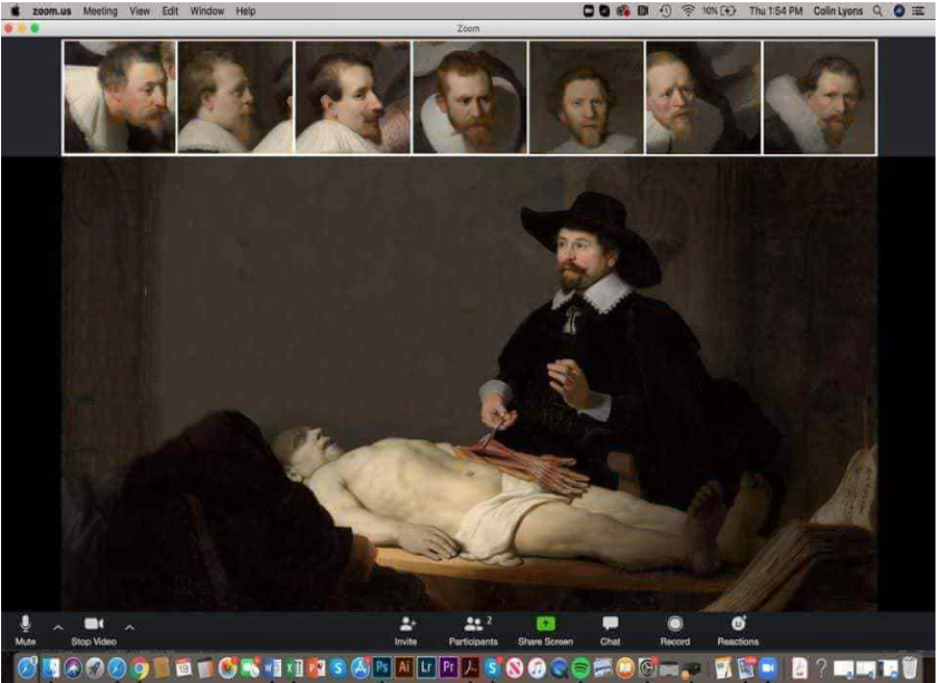 Figure 3: Meme of Rembrandt’s De anatomische les van Dr Nicolaes Tulp (1632). Tulp’s Zoom lesson received 10.7k likes on Twitter at the end of April 2020. The scenography of the Zoom performance of Dr Tulp and the Theatre of Zoom was based on this re-working of Rembrandt’s canonical painting by Colin Lyons, source: Twitter.

The performances (and a workshop following) were commissioned and funded by Cambridge Digital Humanities. They aimed to intervene in current digital technologies by framing the digital as a theatre, a critical play with spaces that allows us to re-perform, re-locate and re-think our real and virtual bodies.

The powerful theatrical setting in Rembrandt’s group portrait The Anatomy Lesson of Dr Nicolaes Tulp (1632) and more recent re-workings of the stage setting (see figure 3) acted as a prompt for the production. The performance asked about the theatrical qualities of the virtual environment now used by so many to interact on a daily basis. We produced a series of online performances in which participants were invited to point and click themselves into the narrow confines of a virtual autopsy. All the while, the Tulp theatre played with the dynamics of virtual spaces by testing the limitations they impose on our bodies. Audience members first arrived in an anteroom where they were welcomed by name and instructed on the rules of conduct in the dissection room. The protocols for the ‘Tulp trial’ require military precision: after passing the ‘screening’, four participants at a time were sent to another waiting room, before being admitted to the main theatre, and exposed to the piercing gaze of Dr Tulp as much as their own glances.

The Tulp performance created ‘a memento mori seen through a series of contemporary events.’ ** Appearing only from the chest upwards (see figure 2), master surgeon ‘Tulp’ examined a twenty-first-century politics of embodiment, ranging from the George Floyd autopsies and the Grenfell Tower inquiry to an analysis of the governmental response to the Covid-19 outbreak.

DR TULP
[…] Judging by the lungs I think there were things that took your breath away.
You used your lungs but maybe there were ways you could have used them more.
Did you sing often enough? I don’t know. 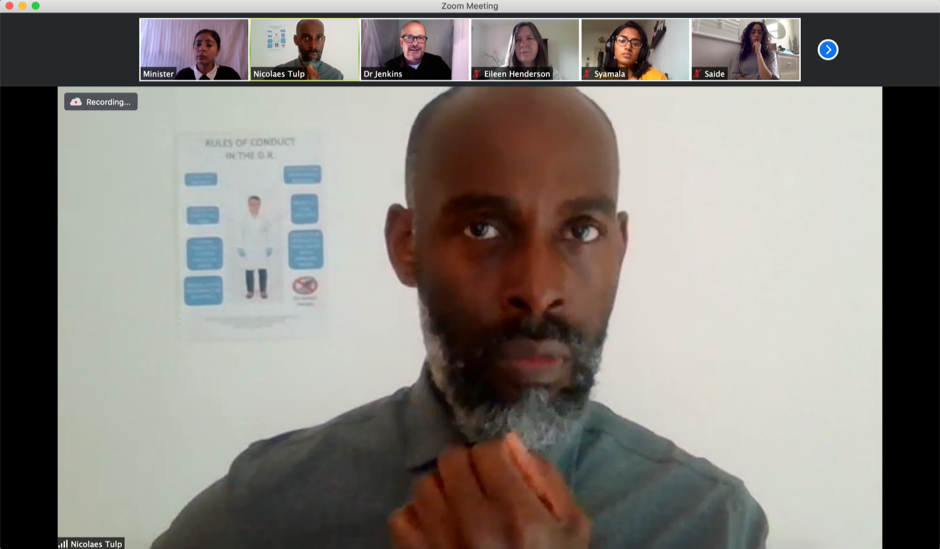 Figure 4: Dr Tulp addressing the audience who participates in a medical trial, Dr Tulp and the Theatre of Zoom, 16 July 2020, also starring Reynah Oppal as Minister and Paul Panting as Dr Jenkins, screenshot by Annja Neumann.

Nowhere else is the lived experience in Covid spaces and their muted theatricality made more tangible than in Tulp’s Theatre of Zoom. It acts as a magnifying lens for our current moment. Tulp’s virtual autopsy cuts across the experience of online teaching, acting as it does in a void with next to no audience responses. Tulp’s theatre resonates with self-isolation in our homes and Covid ICU wards, cutting off people, patients and medical staff from direct communication.

‘It’s unnerving to watch and brilliant to listen.’ ***

The theatre of Zoom requires us to listen in stillness. Furthermore, Tulp’s role changes relate to the identity shifts we are now so accustomed to performing within the confines of a single room.

Looking back on this as the director I am left with many observations and questions. The performance was first and foremost about the audience. Creating a fictive theatre of medicine on Zoom heightened participants’ awareness of their virtual bodies. Did actors, participants and producers, boxed and made rectangular, experience this peculiar theatrical environment as a shared practice? Or might Tulp’s theatre teach us how to seek hidden faces? Is it enacting a lesson about how we co-construct our realities in hybrid spaces? And why is this important? Many of these questions were raised in discussion in the accompanying CDH Open workshop, succeeding the first set of live performances of Dr Tulp and the Theatre of Zoom, on 16 July 2020, which brought the actors into conversation with co-creators and workshop participants.

In the performance, changes of location and character were driven by two actors in the head panel of the Tulp theatre. Remarkably, over the course of eight twelve-minute performances which ran back-to-back across two hours, the actors started to feel each other’s presence on Zoom. What this brings home to me is that presence is not only constituted through Zoom’s virtual environment, but also intersects with the here and now of our living rooms.

I (as a viewer in the gallery) am not sure if this close-up connects or disconnects me. My gaze inhabits a space in which touch is suspended. The consequences of my actions remain uncertain. I can’t touch things or make things. It is as if I have been excluded by a crisis that prevents me from meeting you in three dimensions.

* This quotation and the following quote are excerpts from the script ‘Dr Tulp’s Anatomy Lesson’ by Wendy Bevan-Mogg which served as the dramatic text for the Tulp performance.
** Description of the production by collaborator Carina Westling.
*** Comment raised in the workshop by Caroline Bassett, director of Cambridge Digital Humanities.

The set of live performances on 16 and 17 August 2020 were recorded. You can watch an edited version of Tulp’s virtual autopsy (his final ‘consultation’ on 16 August 2020) below.

My sense is that this has only just begun.

Other comments on the performance or the issues it raised are welcome. An interactive canvas is available for your feedback on both the blog post and the performance (no account needed): https://bit.ly/300TW02.

Dr Annja Neumann is a Postdoctoral CDH Fellow in Digital Humanities. Her practice-based research engages with theatres of medicine and Tulp’s communities of reading. Her most recent publications include a blog post on medical spaces, inside and outside the hospital.

The performance and workshop Dr Tulp and the Theatre of Zoom was produced by Annja Neumann in collaboration with artistic producer Carina Westling and scriptwriter Wendy Bevan-Mogg. 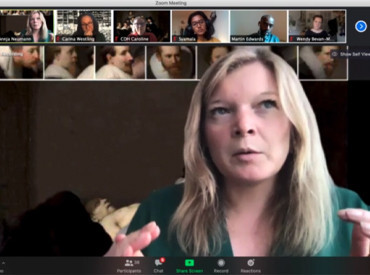