We had no idea whether we were reading the proposal of a professor, a novelist, a postman, a student or a lawyer.

35-year-old James Williams, a doctoral candidate researching design ethics at Oxford University, was announced yesterday (Tuesday 30th May 2017) as the inaugural winner of the US$100,000 Nine Dots Prize.

Up against competition from over 700 other entrants from around the world, Williams’ 3,000-word answer to the set question ‘Are digital technologies making politics impossible?’ was deemed the most original and innovative by the ten-strong Board of leading academics, journalists and thinkers.

His entry Stand Out of Our Light: Freedom and Persuasion in the Attention Economy argues that digital technologies are making all forms of politics worth having impossible as they privilege our impulses over our intentions and are ‘designed to exploit our psychological vulnerabilities in order to direct us toward goals that may or may not align with our own’. He covers:

Born in Cape Canaveral, Florida and raised in Texas, Williams is currently a doctoral candidate at the Oxford Internet Institute and Balliol College, Oxford, where he researches the philosophy and ethics of attention and persuasion as they relate to technology design. He is also a member of the Digital Ethics Lab at Oxford and a visiting researcher at the Uehiro Centre for Practical Ethics. Prior to that he worked for over ten years at Google, where he received the Founders’ Award – the company’s highest honour – for his work on advertising products and tools. He is also a co-founder of the Time Well Spent campaign, a project that aims to steer technology design towards having greater respect for users’ attention. He holds a master’s in design engineering from the University of Washington and as an undergraduate studied literature at Seattle Pacific University.

On being awarded the Prize, Williams said: 'I'm honoured, grateful, heartened, energised and overjoyed to have won this opportunity. I know that many others thought deeply about this question and put substantial time, attention and care into answering it. I'm looking forward to getting to work on producing a book that is worthy of the competition.

'As Neil Postman pointed out in the 1980s, we’re far more attuned to Orwellian threats to freedom such as coercion and force, than to the subtler, more indirect threats of persuasion or manipulation of the sort Aldous Huxley warned us about when he predicted that it’s not what we fear but what we desire that will control us. Yet today these Huxleyan threats pose the far greater risk, and I’m extremely encouraged that the Nine Dots Prize Board has chosen to give its attention to these pressing matters. Their important question is not only compelling but also timely, and this competition is a fascinating and original way of putting such a crucial subject on the societal radar.'

The Nine Dots Prize was established to promote and encourage innovative thinking to address problems facing the modern world. It is judged anonymously by a Board chaired by Professor Simon Goldhill, Director of CRASSH.

Professor Goldhill said: 'This competition was uniquely exciting: all the entries were anonymous, and we had no idea whether we were reading the proposal of a professor, a novelist, a postman, a student or a lawyer. It turned out afterwards we had plenty of all of these among our more than 700 applications. We aimed to discover a new voice, and luckily we have: an as-yet unpublished individual with experience of the tech industry and of academia. There were several proposals that the Board felt would make excellent books, but we think we have the best – and we hope that a really lively public debate will follow its publication. The issue it addresses is hugely important, and this is a new and thrilling way of starting such a discussion.'

• Click here to learn more about the Nine Dots Prize. 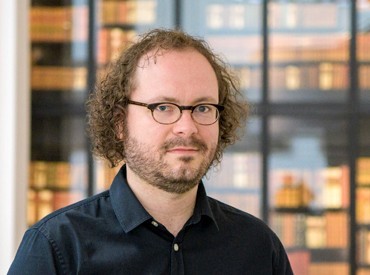