It is an exciting time – a time when everything is up for grabs, a time when the old cultural gatekeepers have fallen away. No longer, do we have obvious figures of authority choosing what gets included or excluded, or institutions dictating what gets reframed and restaged. What has taken their place is the possibility of turning the tables, of giving the audience – or end-users, or consumers – the power.

Clare Foster, British Academy postdoctoral fellow at the Centre for Research in the Arts, Social Sciences and Humanities (CRASSH)

Lucy Jolin of CAM magazine interviews CRASSH researcher Clare Foster. This article was originally published in the Easter edition of CAM Magazine (Issue 87) and is here re-posted with their kind permission.

Emily Zhang is loitering with intent in Grantchester Meadows. She is on a mission: to overthrow a mysterious artificial intelligence that has been terrifying her people. Eventually, she does a deal: the AI will live inside Zhang’s head so that it can see through her eyes, making sure she does not betray it. No matter that Zhang’s robes are from a charity shop, or that her ultimate fate will be decided at the next session in the Unitarian Church Hall. What is important is the Game. And in the Game, her name is I Forgot: of no tribe, surgeon, technosis and explorer, and inhabitant of the Patchwork.

Zhang is a member of the Cambridge Larp Society – that’s live-action role-play – and, along with around 100 others, spends her weekends participating in a year-long fantasy game where the outcome will be determined through play. They’re not alone. Because whether you characterise this as a logical response to the digital world, the rise of the uber-fan or performance without an audience, fully immersive role-playing is on the increase.

“The attraction of Larp is that it is a chance to play a different self,” says Zhang (Churchill, Linguistics MPhil). “Dressing up reminds you that you’re in the game world, not the real world, and that’s important. In the real world, there are consequences, but in Larp you can be bolder. You care less about those consequences, more about what kind of story you can make around what you do.”

The urge to play is as old as humankind itself: the earliest board games date back as far as 3100BC. The idea of adults playing isn’t particularly new either: Dungeons and Dragons (D&D), the paper-and-pen fantasy game, first appeared in the 1970s, while it could be argued that Larping in its basic form – adults dressing up and playing out scenarios – has existed for centuries. But in the early 21st century, something about this adult desire to play is new: it is mainstream. What were once slightly odd, nerdy pastimes are now ubiquitous. Board games cafes and D&D groups have sprung up across the UK, while cosplay – dressing up as your favourite character from popular culture, taking in everything from Pokémon to Captain America – is now a multimillion-dollar industry. “In my first year as a member of the Cambridge University Roleplaying and Tabletop Gaming Society, we had maybe 20 people at our squash,” says third-year medic Alasdair Philbey (King’s). “At our last one, they were spilling out of the door.” 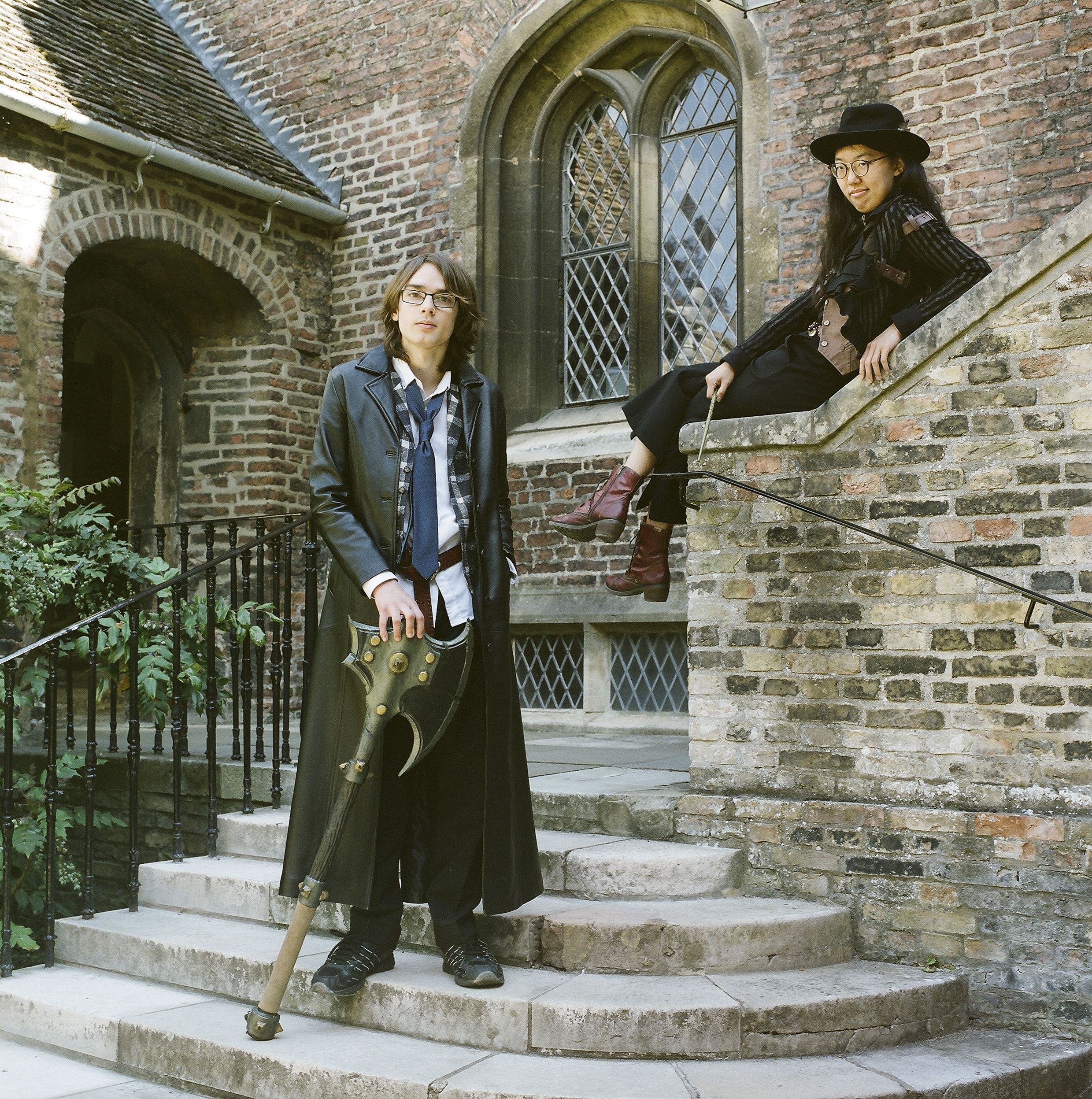 Why now? Dave Neale, of the Centre for Research on Play in Education, Development and Learning, points to cultural change: our adult lives, he says, have become far more fluid and open to new thinking. Our relationships change more quickly, we move locations frequently. In the workplace, new skills are valued – the iteration and invention that flourished when we played as children. There is, he says, a reason why Google has a Lego play area in its office.

“Historically, when you became an adult, you entered a fixed profession,” Neale says. “Your need to engage in the exploration and creativity involved in play was reduced: you knew what you were doing, you kept doing that thing and you just got better at it. But now, we are starting to value the type of thinking that play involves. It keeps the creative brain engaged in developing and coming up with new ideas.”

Clare Foster, British Academy postdoctoral fellow at the Centre for Research in the Arts, Social Sciences and Humanities (CRASSH), also thinks that the rise of what she calls “embodied ways of working together” tells us something about our times. She is the founder of the ‘Re-’ Interdisciplinary Network, created to discuss how and why we repeat, revive, re-enact, restage, reframe, remember, represent and refer.

“In the old days, there were traditions and institutions and you could know who you were by how you reacted to them,” she says. “Today, we don’t share fixed points of reference: in a digital world, there are fewer norms. So it makes perfect sense that how we know who we are now involves these specially made moments, these opportunities, these repeating spaces that create an opportunity for acting together – often around something already familiar in popular culture.”

Dungeons and Dragons is a perfect example of those moments. At its simplest, it is a paper-based role-playing game: players create characters using dice rolls to determine characteristics according to a pre-created table. Those characters are then led through a scenario by the dungeon master (DM) or referee. On paper, it sounds dry. In action, it’s what Philbey calls “an act of collective storytelling”, a rich alternative world where storylines can play out over years, and a single dice roll can determine whether a character lives or dies. Indeed, Philbey says he has been DMing a game for his two younger siblings for 10 years, in an adventure that follows the activities of crafty thief Laura Morel (his sister) and an elven warrior called Xanven (his brother). “Xanven’s like Legolas [the elven prince who accompanies Frodo on his adventures in the Lord of the Rings],” explains Philbey, “but thick as two bricks.”

Meanwhile, he is currently playing a drunken sailor called Fedrick (sic) who takes up with a band of magic-users, and is DMing a third game in which a band of miscreants is trying to save the world from evil darkspawn, while dealing with people who are almost as bad as the evil demons themselves. “It’s all about how they can convince the politicians to stop stabbing each other in the back and stop disaster from coming,” he says. (Parallels with contemporary politics are, he stresses, unintended.)

Philbey sees the rise of collective, immersive play as a celebration of social connection. “I disagree with the idea that we are becoming less connected due to technology: actually, people are always going to find things that bring them together,” he says. “Board games, and D&D, are a fantastic way of doing that. The entire game is about talking to others, about experiencing stories together. Win or lose, you are always hanging out with your friends and having fun. Some of my best game experiences come when the chips are down and we make a big gamble and lose. And someone might die. It’s hilarious, and we talk about it for years afterwards.”

Part of the thrill of real-life gatherings is not knowing what is going to happen, says Foster. “In theatre studies, we use the word ‘contingency’ to describe the possibility of things going wrong in ways even the performers can’t predict. But it’s not just this that makes something ‘live’: it is the fact that it is a collective experience. Anything could happen and we are all experiencing that ‘anything-could-happen’ thing, which makes us into a ‘we’. Play offers this very particular kind of participation. And if it’s also engagement with the familiar – the famous, the historical, an author like Jane Austen – the participation is even richer, connecting us to others in the past and future.”

Matthew Dunstan also understands this urge to connect and create those moments: he has built an entire second career around it. By day, he is a postdoctoral research associate in the Department of Chemistry and a Junior Research Fellow at Clare. By night, he plays and designs board games. In his most recent game, Raids, co-designed by Brett Gilbert, players take on the role of Vikings, sailing to new territories and fighting each other for resources and treasure.

Dunstan says the past 10 years have seen a new style of gaming: so-called Eurogames such as Carcassonne, The Settlers of Catan and Ticket to Ride, which are complex enough to engage adults and simple enough to be played by children, too. Originating in Germany, this style has now spread across the world, creating a new space between simple childhood games like Monopoly and vastly complex tabletop war games, which remain niche in appeal. Raids is typical: it can be picked up in a few minutes, it relies on a recognisable cultural framework (warriors fight for treasure) and one game only takes around 40 minutes.

It has enabled people who loved playing games as children to enjoy them again, he says, without the worry that they won’t be able to participate or understand what to do. “There aren’t many people who have not had any experience playing a game round a table, ever,” he says. “It’s still something that people are comfortable with and that they enjoy. It’s a different way of interacting in a social space, a real space. That’s actually a relatively rare thing. In a way, it’s a privilege to get four adults around a table on the same night to play games. But I think when we are able to do that, we realise that we always wanted to do that.”

It is an exciting time, says Foster – a time when everything is up for grabs, a time when the old cultural gatekeepers have fallen away. No longer, she says, do we have obvious figures of authority choosing what gets included or excluded, or institutions dictating what gets reframed and restaged. “And what’s taken their place is the possibility of turning the tables, of giving the audience – or end-users, or consumers – the power.” 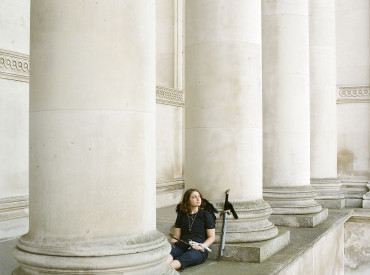 Let the games begin: Rhei Ammaturo (Churchill), who is studying for an MPhil in Earth Sciences, dressed as the murderer Thomas Nait-Kro, a character in the Cambridge Larp Society game, Citadel.