Dr Yannis Galanakis is an Early Career Fellow at CRASSH in Michaelmas Term 2016-17.

The Antiquities Trade in 19th-century Greece

In the past few decades a new research area has emerged focusing on how antiquities came to be accumulated in museums. There is currently, however, a lacuna in our knowledge between studies of excavations on the one hand, and of dealers on the other. Museum archives contain the material to fill this lacuna. My earlier work has highlighted a complex relationship between the various factors –aesthetic, economic, political and legal– which shaped the collections that museums now house. Understanding this relationship in the context of the 19th-century explosion of collecting in Greece, and in Europe as a whole, is essential if what has happened since is to be properly understood.

This project aims to introduce for the first time in a structured, comparative and detailed manner a new model for identifying and assessing the local response to the rising demands in smaller portable antiquities in 19th-century Europe. Using primarily archival material, it aims to discuss the basic instincts of the people involved in the trade and to assess the impact of archaeological legislation on identity politics and the discipline’s development in Greece. It also identifies and interprets the organization of the trade, and the operations of dealers and diggers in the framework of the country’s first archaeological law (1834-1899), one of the earliest of its kind in the world. The story of the antiquities trade in Greece in the mid to late 19th century also plugs into many other contemporary stories: from the story of European foreign policy around the original ‘sick man of Europe’ to the story of the Great Exhibition and the development of archaeology and of the modern museum.

The ultimate aim is to give voice to and explain the motivations and world-views of the local protagonists of the trade –diggers, dealers, agents and the local authorities. Scholarship has for a long time focused on the ‘Grand Collectors’ in the ‘host countries’ but has hardly ever presented the views of the people sourcing and trading them in the ‘countries of origin’. Our understanding of the trade is thus often informed by more recent, sensational and highly politicized, debates and agendas. Using the archival material that is still available for study, there is an opportunity to reconstruct the complexity, social importance and multi-faceted dimensions of this trade, and to re-assess the role of ‘private archaeology’ –alongside that of ‘professional’ or ‘official’ archaeology– in unearthing the past and shaping our understanding of it in the present.

Yannis is a university lecturer in the Faculty of Classics and a fellow and Director of Studies at Sidney Sussex College, Cambridge. He has a D.Phil. and M.Phil. in Classical Archaeology from Oxford University, where his research focused on burial practices and monumental funerary architecture of the Late Bronze Age in the Aegean. Following his studies, Yannis was the Curator of the Prehistoric Greek collections at the Ashmolean Museum, where he was responsible for preparing a number of exhibitions including the permanent gallery of ‘The Aegean World’. His diverse studies in archaeology and archaeological history emphasize on the need to read early excavation reports and archaeological publications in general with an awareness of the political, economic, aesthetic, and ethical conditions of the day they were produced. Yannis is currently preparing the publication of a number of Late Bronze Age tombs from Thessaly, Messenia and Crete and is involved in archaeological fieldwork in Boeotia (Greece). His other major research explores the antiquities trade in 19th-century Greece within the framework of the country’s first archaeological law (1834-1899). 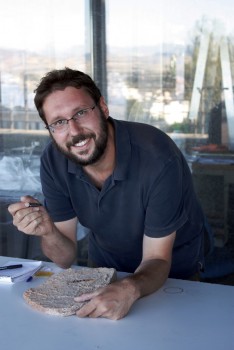