Sovereignty in Times of Empire: Islam, Preachers, and Gangsters

This research aims to provide a cultural history and theoretical critique of the present terms of violence that pit a rule of law, normally represented by states, against a rule of terror, normally represented by non-state actors. The nineteenth-century encounter between Islamic societies and colonialism is the launching point for a re-examination of violence and sovereignty from the perspective of local forms and networks of embodied power, which further illuminates an alternative history of the modern international order. Rather than being born out of bloody wars between states in Europe as the standard Westphalian model posits or forged from the clash of empires and civilizations, the modern international form imposed on the world might be regarded as the product of a global reconfiguration of relations of power, which took place between and betwixt nations and states. Hence, contrary to the typical history of the colonial encounter as an inherent conflict and protracted struggle for the state between colonial rulers and nationalist movements, my research reframes that history in terms of the contest between “traditional big men” and the modern abstraction of Man that came with universal claims about law and order made both by representatives of Empire and by representatives of “the colonized.” This approach promises a route for rethinking present formations of violence along more complex and nuanced lines that question the reductive clash-of-civilizations framing of post-Cold War geopolitics while offering an alternative historical-theoretical framework for analyzing the politics of terror. The theoretical investigation that seeks to access, and potentially recast, the terms of political modernity from a new vantage point will be grounded in the histories and ongoing social lives of an unlikely pair of figures, the “preacher” and the “gangster.” I traverse mostly forgotten contact zones between “Islam” and “the West” excavating along its borders these two problematic figures of embodied sovereignty: the mystical, peripatetic sayyid and the criminal, heroic futuwwa. Exploring the putative abjection of the two figures, which represented archaic forms of politics and personhood to the West and to modern Islam, provides a unique perspective from which to re-materialize the vanished realm of their mutual birth and to reconsider their shared future.

Wilson Jacob has been Associate Professor in the Department of History at Concordia University in Montreal since 2011. He was awarded his PhD in History and Middle Eastern Studies from New York University in 2005. His major monograph Working Out Egypt was published in 2011 and his articles include 'Of Angels and Men: Sayyid Fadl bin Alawi and Two Moments of Sovereignty', Arab Studies Journal 20, 1 (Spring 2012): 40-73 and “Overcoming Simply Being: Straight Sex, Masculinity, and Physical Culture in Egypt,” Gender and History 22, 3 (November 2010): 1-19. 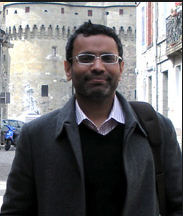