The hermeneutics of conversion: early-modern theories of cognition from Desiderius Erasmus to Richard Hooker

One of the key ‘forms of conversion’ to contribute substantially to the intellectual transformation of Europe and its worlds during the early modern period is a decisive reorientation of epistemology with its consequent recasting of hermeneutics on the part of both humanist scholars and reforming theologians.  In the course of the sixteenth century, an epistemology of ‘illumination’ exemplified by Erasmian humanism inspired a radical rethinking of semiotics—of the relation between ‘signs’ and ‘things signified’—which contributed in turn to a thorough reassessment of the hermeneutical assumptions of religious reformers and counter-reformers alike.  This ‘epistemological conversion’ of deep-rooted assumptions of the theory of cognition underpins other contemporary forms of conversion as well, including such ‘conversions’ as expressed in the translation of the scriptures and other ancient texts, the transformation of sacramental elements according to diverse theories of ‘presence’, and a profound reorientation of fundamental cosmological assumptions.

In his landmark first edition of the Greek New Testament published by J. Froben in Basle in 1516 under the title Novum Instrumentum omne, diligenter ab Erasmo Rot. recognitum et emendatum…, the formula ‘recognitum et emendatum’ in the title can only refer to Erasmus’s ‘revision and improvement’ of the Latin text of the Vulgate which appeared in the right-hand column parallel to the koine text.

The second edition of 1519, which substituted ‘Testamentum’ for ‘Instrumentum’ in the title, went even further in its project of ‘recognitio’: Erasmus replaced Jerome’s text with his own more classically elegant translation. In this edition Erasmus rendered the admonition of John the Baptist in Matthew 3 ‘Μετανοεῖτε, ἤγγικεν γὰρ ἡ βασιλεία τῶν οὐρανῶν’ as ‘Resipiscite, in propinquo est regnum cœlorum’ (later translated by William Tyndale as ‘Repente ye, for the kingdome of heven is at honde’).  This translation of μετανοεῖτε was enormously controversial for its replacement of the Vulgate version ‘pœnitentiam agite’—literally translated ‘do penance’—and added fuel to the imminent conflagration ignited by Martin Luther’s root-and-branch critique of the received doctrine of penance in his Ninety-Five Theses of 1517.

For Erasmus, the hermeneutics of conversion begins with cognitive conversion, a conversion of the faculty of understanding together with the assumptions concerning the relation between the intellect and the senses. His account of metanoia in the Enchiridion and its application in the Novum Instrumentum omne provides an exceptionally useful point of departure for an exploration of the momentous shift in sixteenth-century cognitive ecology.

By the end of the century Richard Hooker is able to reaffirm a positive role for the lower faculties in the fourth book of his treatise Of the Lawes of Ecclesiasticall Politie (1593). Hooker paraphrases the sixth-century Syrian Neoplatonic theologian Pseudo-Dionysius the Areopagite when he observes that ‘the sensible things which religion hath hallowed are resemblances framed according to things spiritually understood, whereunto they serve as a hand to lead and a way to direct (IV.1.3)’ The phenomena of human aesthetic experience are understood here as ‘resemblances’ of their original ‘causes’, and their ‘participation’ (methexis) works in both directions—causes dwell in their effects, and effects in their causes. The goal of the proposed research is to explore the tension between these two humanistic accounts of the relation between intellection and imagination, and to trace the unfolding of the ‘conversation’ between alternative approaches to epistemology and the role of the senses in conversion over the course of sixteenth century.

Torrance Kirby is Professor of Ecclesiastical History and Director of the Centre for Research on Religion at McGill University, Montreal where he has been a member of the Faculty of Religious Studies since 1997. He holds BA and MA degrees in Classics and was a Commonwealth Scholar at Christ Church, Oxford University where he received a DPhil degree from the Faculty of Modern History in 1988.  He is a Fellow of the Royal Historical Society and has held Visiting Fellowships at St John’s College, Oxford, New College, University of Edinburgh, the Folger Shakespeare Library, and the American Academy in Rome. He has been a member of the Princeton Centre of Theological Inquiry since 1996 and is a life member of Corpus Christi College, Cambridge. Recent books include Persuasion and Conversion: Religion, Politics and the Public Sphere in Early Modern England (2013), The Zurich Connection and Tudor Political Theology (2007), and Richard Hooker, Reformer and Platonist (2005). He is also the editor of A Companion to Richard Hooker (2008), Richard Hooker and the English Reformation (2003), and co-editor of A Companion to Peter Martyr Vermigli (2009) and Paul’s Cross and the Culture of Persuasion, 1520-1640 (2014). 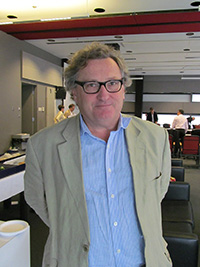