Dr Suparna Roychoudhury is  a  CRASSH  Conversions Fellow in Michaelmas 2015.

Phantasmatic Shakespeare: Imagination in the Age of Early Modern Science

How did Shakespeare think about mental images? He clearly knew the principles of faculty psychology, handed down to the Renaissance from antiquity, according to which “imagination” (also called the “fantasy” or “fancy”) is the faculty of the soul responsible for creating the “phantasms” or mental images needed to carry out cognitive acts. Phantasmatic Shakespeare contends that Shakespeare’s treatment of imagination also points to the various ways in which ideas about imagination were reshaped by the scientific revolution—by developments in such fields as anatomy, medicine, natural philosophy, mathematics, and natural history. The project proceeds by examining Shakespearean texts alongside the work of such figures as Andreas Vesalius, Francis Bacon, and Robert Burton. I argue, for instance, that Shakespeare’s sonnets contemplate the anatomical status of imagination, and that Love’s Labour’s Lost parodies the scientific method with its academy of fancy. Macbeth deals with the ever-expanding pathology of hallucination, while The Tempest brings imagination in relation to natural historical classification. These and other texts in Shakespeare’s corpus raise questions about imagination that were newly underlined by early modern science: for instance, where in the brain does imagination happen? What are its diseases? Can imagination produce knowledge? Overall, the book establishes that Shakespeare thought about imagination in varied contexts, among them the mind’s relation to the body, the make-up of the universe, and the place of humankind in nature. More crucially, the project demonstrates that the Shakespearean view of imagination is finely attuned to scientific thinking insofar as it is derived from, and offers to resolve through aesthetic representation, epistemic conflicts between older and newer forms of knowledge.

Suparna Roychoudhury holds a Conversion in the Early Modern Period Fellowship at CRASSH in 2015. She completed her doctoral degree in English from Harvard University in 2011, earning an Honorable Mention for the J. Leeds Barroll Prize (awarded by the Shakespeare Association of America) for her dissertation. Her essays on early modern science, medicine, psychology, and travel have been accepted for publication by ELH: English Literary History, SEL: Studies in English Literature 1500-1900, Modern Philology, and The Journal for Early Modern Cultural Studies. Since 2012, she has been an Assistant Professor of English at Mount Holyoke College. 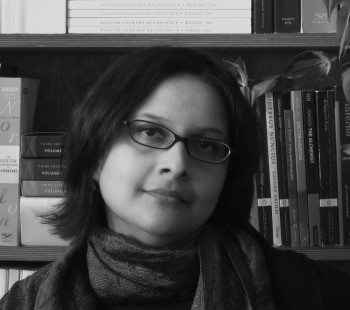