Dr Ronita Bardhan is the Charles Wallace India Trust Fellow 2018-19. She will be at CRASSH in Michaelmas 2018.

"Well-being" and domestic energy decision-making in of slum rehabilitation housing in India.

"Well-being" through domestic energy decision-making in low-income habitats of developing nations is an under-explored area. Polices tend use consumption of resources like energy as a metric of well-being and are often ‘taken as granted' to move linearly with economic upliftment. The low-income settlements like slums are presumed synonymous with poverty which adversely affects their energy decision-making, implicating livability. However, this might not always be the case. Especially in emerging economies where the informal sector contributes significantly to the GDP, the low-income communities have access to high disposable income. For example, the decrepit slums of Dharavi in Mumbai generate a thriving parallel economy of 600 million USD per annum. This creates a high disposable income for the slum dwellers, allowing them with choices to comfort providing energy devices that cater to well-being from thermal comfort, cleaner cooking fuel, better indoor air quality. Thus, debunking the myth of linear ascension of energy consumption with higher socio-economic status. The impact becomes profound with energy demand rebound. The linear assumption then not only limits the understanding of how and why the energy demand arises, how it will evolve but also pose threats to the energy security.

This research adopts a well-being perspective in exploring the notion of comfort, energy use, household practices and adaptation of new technologies in low-income settlements. Objectively, this study attempts to critically appraise the existing pathways in the literature that link well-being and energy choices of low-income habitats. The conceptual understanding thus developed is beneficial for the collaborative research with a Cambridge project focused on the gender norms and identities in energy in low-cost housing supported by British Academy's Knowledge Frontiers Programme 2017.

Dr Ronita Bardhan is Assistant Professor at the Center for Urban Science and Engineering at the Indian Institute of Technology Bombay, India and Associate Faculty at the Interdisciplinary Programme (IDP) in Climate Studies in the same institute. She also holds the Shimizu Chair Visiting Professorship at Stanford University, USA. Ronita is an architect and urban planner by training, with a PhD in Urban Engineering as a Monbukagakusho (MEXT)Scholar from The University of Tokyo, Japan. Her work has centred around sustainable urban planning for low-income settlements in Indian megacities. In short time, she was able to demonstrate the need for a data-driven design pathway for low-income settlements like slums in Mumbai to facilitate a better quality of life among the women and children. She engages deeply in mixed-method research and believes in the full integration of various stakeholders in the policy-making process for sustainable low-income housing. Her research mostly evolves from the practical needs of the community and is interpreted through the lenses of the state-of-the-art urban modelling toolkits. The transdisciplinary nature of her research transverses across the improvement of indoor air quality in slums and tenement housing to the assessment of energy security in such resource-constrained settlements. She is the recipient of The Building Energy Efficiency Higher & Advanced Network (BHAVAN) Fellowship 2016-2017 in recognition of her work in building energy efficiency for low-income communities and was awarded the Young Researcher Award 2012 for her innovative contribution in the field of Sustainable Urban Regeneration in Japan. 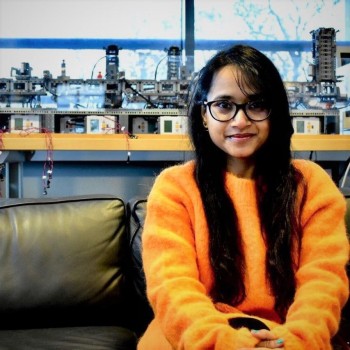