Khaled El-Rouayheb is Jewett Professor of Arabic at Harvard University. He conducts research on Arabic-Islamic intellectual history, especially in the period from the thirteenth century to the eighteenth. His publications include Before Homosexuality in the Arabic-Islamic World, 1500-1800 (2005), Relational Syllogisms and the History of Arabic Logic, 900-1900 (2010), and Islamic Intellectual History in the Seventeenth Century: Scholarly Currents in the Ottoman Empire and the Maghreb (2015).

While in Cambridge Khaled will be participating in seminars and lectures at the Faculty of Divinity. He will be the main speaker at their Religious Studies seminar on Tuesday 17 November at 2.30pm in the Lightfoot Room, Muhammad b. Yusuf al-Sanusi (d.1490): Logic, Theology and the Condemnation of "Imitation".  For further information please click here.

Tuesday 17 November, 2.30pm in the Lightfoot Room, Faculty of Divinity
Muhammad b. Yusuf al-Sanusi (d.1490): Logic, Theology and the Condemnation of "Imitation,"’

Thursday 28 April, 5pm in the Runcie Room, Faculty of Divinity
A Discourse on Method: Dialectics ('ilm al-munazara) in the Ottoman Empire in the 17th century

Wednesday 4 May, 5pm in the Runcie Room, Facilty of Divinity
The Rise of "Deep Reading" in Ottoman Scholarly Culture. 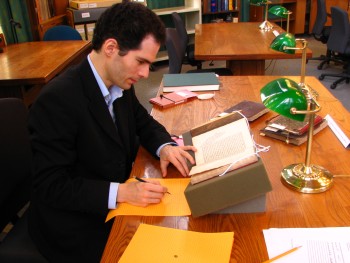