Dr Charlotte-Rose Millar is a Conversions in the Early Modern Period Fellow at CRASSH in Lent 2018.

In early modern England, ghosts represented a point of tension between pre and post-Reformation belief. In pre-Reformation doctrine ghosts could be one of three things: beings sent from God, beings sent from the Devil, or the departed souls of the dead. Post-Reformation England’s official rejection of the doctrine of purgatory should have meant the figurative death of the ghost as dead person; yet it didn’t. For centuries after the Reformation, ghost stories flourished, with a significant proportion of these stories featuring tales of murdered men and women coming back to life to avenge their deaths; of the dead unable to rest until they had righted a societal wrong; or even of helpful spirits returning from the grave to do chores around the house.

During my time at CRASSH I will focus on how the continuation of ghost stories in post-Reformation England can nuance our understanding of conversion narratives; both in a religious sense but also through an examination of the changing emotional character of these experiences. By examining one’s emotional reaction to a ghost, some medieval authors claimed it was possible to decipher the ghost’s origin: angelic, demonic or departed soul. Despite the early modern emphasis on ghost as angelic or demonic, many men and women still had an emotional reaction to what they believed was the soul of a departed loved one. Emotional experience was fundamental to how ghosts were interpreted and, I would suggest, crucial to their continuation within a process of large-scale religious conversion.

As such, this project will explore both the importance of emotions to conversion narratives and demonstrate how emotional practices could be used to resist large-scale attempts at religious conversion. More broadly the project questions the relationship between conversion and emotion and asks whether emotions simply inform religious conversion or whether they themselves are subject to conversion. In doing so, it questions whether conversion was a rhetorical strategy, one that could be used retroactively to shape the past, or whether conversion was ontological, a process that was capable of actually changing how men and women expressed their emotions.

Charlotte-Rose Millar is a Postdoctoral Fellow in the Institute for Advanced Studies in the Humanities at the University of Queensland and an Associate Investigator with the ARC Centre of Excellence for the History of Emotions (1100-1800). She received her PhD from the University of Melbourne in 2015. Her book, Witchcraft, the Devil and Emotions in Early Modern England, is forthcoming with Routledge in 2017. She is also the author of numerous works on witchcraft, diabolism, emotions and sexual practices in early modern England and has won two prizes for her published work. 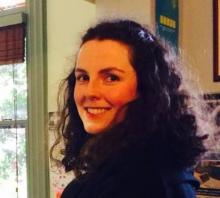