From the early nineteenth century, North-East India has been a region of fascination for anthropologists, linguists and sociologists from Britain, Europe and elsewhere due to its rich ethnic and cultural diversity. To name a few, Col. R.G. Woodthorpe, T.C. Hodson, J.H. Hutton, J. P.Mills, Christoph von Fürer-Haimendorf, Ursula Graham Bower and Sir Charles Ridley Pawsey spent years in different states of North-East India  in what was then the province of Assam collecting and documenting the indigenous or ‘tribal’ cultures. Most of their collections and documentations are in the form of objects, tour diaries, cine films and photographs which were subsequently donated to, or in some cases purchased for various museums and institutions all over UK. These collections document the cultures of the indigenous communities of North-East India and are considered as the world's most comprehensive study of tribal cultures in South Asia and the Himalayas.

The main objective of this proposal is to carry out research on the ethnographic, documentary and photographic collections at the Museum of Archaeology and Anthropology (MAA) and related archives of documents, film and photographs at the Centre of South Asian Studies and the Cambridge University Library. Added to this, my own research will benefit from collaborations with two Cambridge projects focused on the heritage of the indigenous peoples of the North-East India, one with MAA for its upcoming exhibition in 2017 and the other with Cambridge Rivers Project.

She is Assistant Professor in the Department of Ancient Indian History Culture & Archaeology, Visva-Bharati, Santiniketan. She was awarded Ph. D from Deccan College, Post-Graduate & Research Institute, Pune in 2013. She was selected for the NTICVA UK Visiting Fellowship 2014-15. In 2013, she was nominated official nominee of India to attend the SAARC Regional Seminar, Sri Lanka. Presently, she is involved in several projects to document cultural heritage of the indigenous communities in Arunachal Pradesh, North-East India. 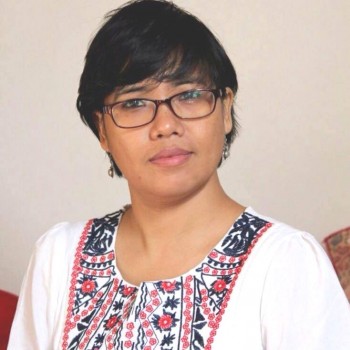