Wotan: A Most Human God

Tomlinson’s voice rang through the hall, and the piano was almost an orchestra.

I am not a Wagnerian. I have played the odd prelude or overture with amateur orchestras: I am well aware that that doesn’t count. (It also gave me an abiding, myopic dislike of Wagner’s scoring for oboe.) I have seen one production of Wagner – Lohengrin at Covent Garden, many years ago: that doesn’t really count, either. Clearly, I am a long way outside the charmed and passionate circle of Wagner obsessives. But we are hosting Sir John Tomlinson at CRASSH this week. Ten unbroken years (1988-98) as Wotan at Bayreuth: this is an achievement to impress even the ignorant. So I went to hear Sir John yesterday, but in a spirit of curiosity, rather than of hero-worship.

I left in a spirit of hero-worship.

Even in the conversation that opened the event, Sir John’s utter absorption in the role of Wotan was evident: the detail with which he approached it, the precision of his grasp of the drama. But the revelation came – as surely it should – in the singing. Sir John had put together for us a sequence of key passages taking us through the arc of Wotan’s development in the course of the Ring. (The piano accompaniment was played with total commitment by Jâms Coleman.)  We followed Wotan from majesty through anxiety and doubt and the grief of abandonment to his hopeful repose as he resigns the future to Siegfried. And when I say ‘followed’, we were truly with him. Each musical episode was flawless, emotionally distinct, totally involving.

Even amid such riches, there were for me two quite exceptional moments. The first was in an excerpt from Act 2, Scene 2 of Die Walküre. The mood is that of an anguished father: Wotan now has a mortal son whom – of course – he cannot control; he can only watch and hope as he relinquishes him to the world of free will. ‘Das and’re, das ich ersehne,/ das and’re erseh’ ich nie:/ denn selbst muß der Freie sich schaffen;/ Knechte erknet’ich mir nur.’ The complex mixture of pain and pride in Tomlinson’s voice distilled the mixed pain and pride of every parent: I was close to tears.

The other exceptional moment was in quite a different vein. It came from Siegfried, Act 3, at the very end of Scene 1. Wotan, as the Wanderer, is talking to ‘die unweise’ (or is it ‘Urweise’?), Erda. The tempo marking is ‘mäßig’, moderato; the mood is of serene joy, though the passage begins with an ascending orchestral scale in C minor, which underscores the struggle with which that joy has been achieved. Suddenly there is a clarion call of joy and hope utterly unalloyed: ‘dem herrlichsten Wälsung/ weis’ich mein Erbe nun an.’ It ends on a triumphant fortissimo in E flat major. It isn’t an open chord, but in that sudden flowering it feels like one. Tomlinson’s voice rang through the hall, and the piano was almost an orchestra.

Incidentally, that moment is followed by a beautiful passage for oboe. Another prejudice shattered.

In the question period, Sir John Tomlinson was asked how he prepared for a role. He said he listened to every performance he could – once, and only once. Otherwise, he said, his own interpretation would no longer be unique: it would inevitably take on some of the characteristics of others. (For the record, his favourite Wotan was Ferdinand Frantz; and even Frantz he had listened to only once.) How fortunate are we who are not preparing for a role. We can go to the great recording of Tomlinson at Bayreuth under Daniel Barenboim and listen to it again and again. 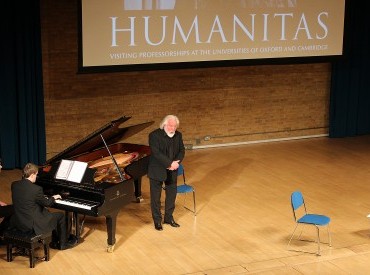