The Importance of Listening

Everywhere we go, our bodies are impacted by audible vibrations. No matter how sensitive or insensitive our own hearing might be, we live in a society that produces and regulates a mindboggling array of sounds.

For three reverberant days in July, CRASSH will be hosting a conference entitled Sound Studies: Art Experience Politics. It promises to be a noisy affair: sound art installations, presentations by leading researchers, a sound art concert, and hopefully a lot of conversation.

Despite its rather formal sounding title, ‘Sound Studies’ isn’t really an academic discipline. It encompasses researchers across the arts, humanities and social sciences, so perhaps it would be better described as a preoccupation with or passion for sound, one that prioritises listening as a mode and subject of academic enquiry. Using the phrase ‘Sound Studies’ functions as a rhetorical foot stomp. Universities tend to be very visually-inclined institutions, and they continue to dedicate much of their resources to investigating text and image. This could be seen to reflect the sensory hierarchy of broader society, or it might reflect the historic lineages of academic disciplines—maybe both. And yet, the assumption that the stuff we study and the stuff we do as researchers should be primarily visual is so strong that considerations of the other senses—including sound, touch, taste, smell, and proprioception—tend to be considered anomalous. Any student or researcher who finds the phrase “Sound Studies” to best describe what they do will probably have to answer the questions “What is Sound Studies?” and “Why are you researching sound?” a few times a week.

Everywhere we go, our bodies are impacted by audible vibrations. No matter how sensitive or insensitive our own hearing might be, we live in a society that produces and regulates a mindboggling array of sounds. The production, perception, and interpretation of these sounds can be individual or institutional, private or public, intentional or incidental. Sometimes we engage with collective noise making, such as when we clap together after a speech. At many times, however, we individually avoid making inappropriate or taboo noises, such as when we try to avoid talking too loudly in the library or farting in public. Don’t forget to turn your mobile on silent mode before an examination at Cambridge, otherwise you could be fined £50 should it ring, beep or serenade! Each social space we enter is governed by these kinds of sonic social rules—in other words, they are full of sonic dos and don’ts. Sometimes these rules are clearly advertised but most often they are unspoken. We have to learn these rules to function well socially—they become part of our identities and the stereotypes we construct regarding others.

Some people are able to follow these dos and don’ts fairly consistently by continually disciplining their bodies and moderating their social interactions. Others cannot meet these expectations. For example, certain somatic illnesses and mental health conditions are characterised by uncontrolled or unusual sound-making—audible behaviours such as raspy breathing and compulsive speech or vocalisations could be construed as symptoms of pathology. People who often break taboos regarding where and when they should make noise can be ostracised, punished or pigeonholed. For some, then, sonic social requirements function as part of ableism, the system of oppression that discriminates in favour of ‘able-bodied’ or ‘healthy’ people (in this case, people who sound ‘normal’). Sounding ‘normal’ isn't just a criterion for being considered able-bodied or ‘of sound mind’—other people find that sonic requirements, taboos and stereotypes contribute to their being oppressed based on gender, race and class. On the other hand, purposefully breaking sonic social rules by noisily protesting in public spaces is an important way in which oppressed groups of people continue to both resist silencing and bring attention to their struggles.

The sonic aspects of social organisation and interaction vary greatly around the world and throughout history. Historical and anthropological studies of sound often investigate how these are expressed in different social groups during ritual and public events, and how they change or remain stable over time. But it’s not just human-to-human sonic interactions that are of interest. Humans interact sonically with both other species and what is commonly termed the environment—bird songs fall silent as deforestation and global warming eradicate their habitats; urban sprawl and the development of motorways have transformed the soundscapes of the countryside, filling more and more areas with noise pollution. The entire field of acoustic ecology has been dedicated to documenting the interrelationships between humans, other living beings, and their environments. But it’s not quite as simple as “man versus nature” or “man destroying natural soundscapes”—humans have been active sonic agents in many ecosystems across time, and their interactions have always been highly complex. It’s impossible to draw clear lines between the sounds of nature and the sounds of civilisation, or even between human and non-human sounds. Sound is inherently interactive.

Humans have long poured their energy into developing sound technologies used to alter their sensory environment. These technologies include recent inventions such as MP3 players and audio streaming, but can also be identified long before the Industrial or Digital revolutions. Some archaeologists have suggested that Neolithic monuments such as Stonehenge were designed to alter acoustic environments of ritual spaces in order to inculcate power and moderate social order. Both Roman amphitheatres and medieval cathedrals functioned in part as sound technologies—vast stone structures that created reverberant chambers designed to morph and transmit sound across great distances to enable mass communication. Other technologies had unintended profound effects on public soundscapes—for example, the introduction of guns and artillery dramatically changed the soundscapes of war and battle; the development of the nuclear family and the spread of middle class suburbs drastically changed the sonic experience of the family, domesticity and childhood.

Sound Studies: Art Experience Politics participants will have the opportunity to listen to creative academic and artistic presentations exploring gender, embodiment, domesticity, urban environments, and technologies. They will also be invited to participate in aural considerations of war, conflict, protest, imprisonment, and genocide. It is often difficult to do multidisciplinarity well, whether it is between academic disciplines or academics in collaboration with artists and practitioners. Sound studies, however, functions as a hub where diverse researchers, practitioners, and artists can link up in solidarity with each others’ skilled and creative listening. Our goal in setting up this conference has been to promote this solidarity and encourage further collaboration. It promises to be a highly diverse and creative event.

Anija Dokter (PhD student at the Faculty of Music) 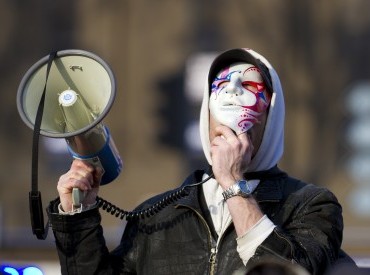 Protester with a megaphone from Toulouse by Pierre-Selim