Beyond Beliefs – Listening to Cultural Voices in Psychological Therapy

Most schools of psychological therapy do not have a well-developed account of how social and cultural contexts can influence an individual’s experience of distress, making it difficult to incorporate them into a clinical formulation.

A blog written by Alistair Gaskell of the Cambridge Stepped Care Therapies Service for Older People. He is a member of the Talking as Cure? Research Network at CRASSH.

Most, although not all, psychological therapies aim to offer an understanding of a client’s distress as a prelude to, or as part of the process of, helping them to resolve it. This is often termed a formulation. What kind of formulation is needed is a question about which there are substantial differences of opinion.

For some, particularly within the cognitive behavioural tradition, a formulation is primarily about what maintains the distress and how this can be interrupted. For others, both within cognitive behavioural and psychoanalytic traditions, it is important to understand how the distress came about; what the underlying beliefs or conflicts may be and how are they connected to a client’s experiences, particularly early experiences. There are also different accounts of how offering a formulation may be helpful (Johnstone and Dallos 2014). However, one important idea is that, in context, distress may seem more like a comprehensible and reasonable response to adverse circumstances and less like the strange personal failing that many people seeking therapy describe.

The understanding that is on offer in most therapy is a personal one. Psychological therapies are not, in general, good at incorporating social and cultural factors into their formulations. This is not simply a matter of thinking them unimportant. Most schools of psychological therapy do not have a well-developed account of how social and cultural contexts can influence an individual’s experience of distress, making it difficult to incorporate them into a clinical formulation.

I would like to offer a sketch of how some aspects of social context could be mapped in a therapeutically useful way, taking the example of a neglected aspect of context, age.

In my work as a clinical psychologist within an older people's mental health service my clients are almost all over 65 years old. Many are in their 80s or older. This contextualises their distress in two important ways.

Firstly, they were born and brought up at a particular time in history. Currently to gain the dubious privilege of referral to older people's mental health services in the UK, one must be born in 1956 or earlier. This brings with it exposure to a certain set of cultural assumptions and expectations which may impact on the way in which people's identities are formed. For instance, speaking to people who were brought up in the UK between about the 1930s and early 1960s, periods of economic depression and austerity, surrounding the extraordinary social upheaval of the Second World War, there seems to have been an emphasis on physical survival rather than emotional wellbeing. Although everyone’s experience of growing up in this culture is individual, I have heard from many people about an idea that we should not 'dwell on' our emotional experience, 'make a fuss' or be 'self-indulgent' by talking about that experience.

Secondly, on attaining the status of an 'older person' one becomes the subject of another set of cultural assumptions and expectations. Within UK culture many of these are negative assumptions, concerning for instance older people’s mental and physical abilities, their capacity to learn and change. One particular idea relevant to psychological therapy is the assumption that older people's emotional experiences do not need to be attended to. This assumption underlies the lack of research into emotional experiences particular to older people such as the transition from independent living to a care home or post-traumatic experiences following falls.

From a Cognitive Analytic Therapy (CAT) perspective (Ryle and Kerr 2016), one of the major influences on mental health is relationships with important others, typically in childhood, which are internalised and enacted in relationships throughout one’s life. They term such relationships 'Reciprocal Roles.' One way of understanding Reciprocal Roles is as 'voices' with which we conduct a dialogue (in our actions as much as in our thoughts and words). So, the experience of a critical father might be internalised as a critical voice which influences both relationships with others and one's relationship with oneself (in the form of self-criticism).

In typical CAT practice, as with other forms of psychotherapy, such voices are rooted within a client’s personal history, but the idea fits well with what we might call cultural voices both in the present day and historically. Perhaps many of both the current and immediately preceding generations of British older people have internalised voices which say that we should ignore emotional distress and 'soldier on with life' or maybe devote our energies into either providing for or caring for others. When, perhaps with retirement and the advent of health problems in later life, these roles get harder to sustain, we may have to deal with both the historical voice of our childhood culture, telling us not to make a fuss, but also the current cultural voice telling us that we are 'past it anyway' and should not complain.

In trying to understand these and other cultural voices that my clients are in dialogue with, I often feel like an amateur historian, or at times an amateur sociologist or anthropologist. Even the comparatively broad training of a clinical psychologist prepares me poorly for thinking about cultural voices. With the development of programmes such as Improving Access to Psychological Therapies in the UK, psychological therapy trainings are becoming briefer and more technique-focussed, making it even harder for therapists to consider social and cultural aspects of psychological distress.

Ryle, A. and Kerr, I. (2016) Introducing Cognitive Analytic Therapy: Principles and Practice of a Relational Approach to Mental Health, Chichester: Wiley

Listen to 'The Talking as Cure' podcast series at the Cambridge Festival. 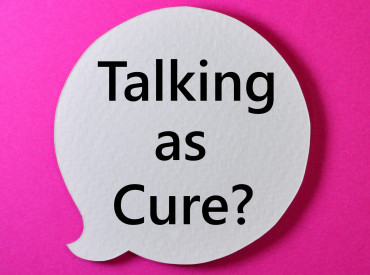